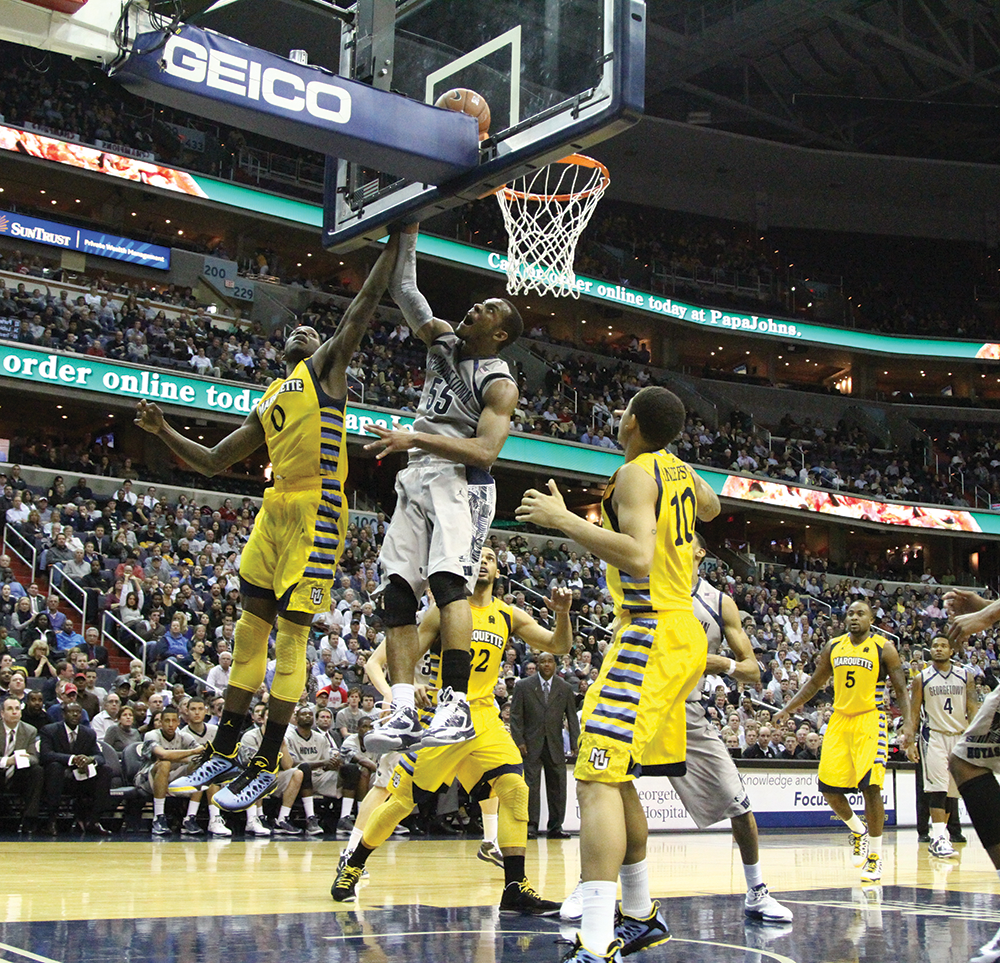 Nothing frustrates Vegas oddsmakers more than a battle of streaks.

Coming off a resounding 63-55 victory over Marquette, No. 15 Georgetown (18-4, 8-3 Big East) has now won six in a row, but the team has also dropped four straight across three years to Friday night’s opponent, Cincinnati.

The Bearcats (19-6, 7-5 Big East) are hoping to add to that streak of Hoya domination at their home court of Fifth Third Arena, which may well act as a sixth man in what is likely to be a gritty weekend matchup.

Junior guard Markel Starks, however, noted that he wouldn’t be surprised if the hosts’ advantage was even bigger than that.

“Once the crowd gets into it, it’s almost like it’s 100 people out there on the court,” Starks said, explaining that Cincinnati’s defensive pressure still adds to the effect. “But at the end of the day, everybody on this team has played in big games before.”

Friday certainly promises to be another one — arguably Georgetown’s toughest road test yet — and any Hoya success will have to come along with good work on the glass.

“You have to rebound against them,” Head Coach John Thompson III said of the Bearcats. “They’re one of the better rebounding teams in the nation. They do a good job of limiting you to one shot but getting multiple shots themselves.”

Part of that equation lies in the hands of sophomore center Mikael Hopkins, whose nine rebounds against Marquette were essential in Georgetown’s win. Over the past three games, Hopkins has noticeably stepped up his offensive game as well, averaging more than nine points per game.

“On the offensive end, Coach has always been telling me to get my teammates the ball and don’t look for shots myself, and the shots are [going to] come,” Hopkins said. “And that’s what has been happening.”

Still, Thompson III is looking for smarter play out of his starting five-man.

“He has played better the past couple games, but he still could play better than he has been playing,” Thompson III said. “He needs to focus on rebounding, defending [and] running hard … and the offense will fall into place.”

Georgetown also needs to tighten up on the defensive end. While the Hoyas forced 19 Marquette turnovers Monday night, they also allowed the Golden Eagles to shoot 43.5 percent from the field — the first time in eight games that they’ve allowed an opponent to shoot better than 40 percent.

“A lot of closeouts weren’t as good as coach wanted,” freshman guard D’Vauntes Smith-Rivera said. “But we’ve just got to move on and get ready for [Cincinnati].”

Knowing where all the scorers are on the court will be important for Georgetown, as the Bearcats rely on solid spacing and smart passes to put themselves in good positions to convert. The definite focal point is Cincinnati’s potent backcourt, which consists of junior Sean Kilpatrick — one of the best pure scorers in the Big East — and senior Cashmere Wright, the veteran leader of the team.

“They do a very good job of getting the ball to their offensive players where they’re good,” Thompson III said. “For Kilpatrick, everywhere is good for him.”

Thompson III’s preparations will be at least as much about his own players, though, as they will be about Cincinnati. Most of the Hoyas’ losses this year have come as a result of their own shortcomings, and defense, rebounding and leadership will be three points of emphasis this week, according to Thompson III.

“A lot of times, with all the exposure we get … you forget that this is an academic institution,” he said. “You forget that most of my job is to try to get these guys to walk out of here as men.”

As one of the only two upperclassmen on the team, Starks has embraced that maturation process and has developed as a true team leader along the way. It’s been a tough and gradual process for the Maryland native — whose numbers have improved dramatically since the suspension of sophomore forward Greg Whittington —  but ultimately one that Starks believes is necessary for the overall improvement of his game and the team’s success.

“I had to learn how to play without the basketball,” Starks said, “and that’s been a great learning experience for me.”

But nobody’s growth in maturity has been more evident than that of sophomore forward Otto Porter Jr., whose meteoric rise from a small town in Missouri to the national stage at Georgetown continues to gain national attention. For Thompson III, Porter Jr.’s brilliance is more than anything rooted in his simple ability to consistently win games at a high level.

Junior forward Nate Lubick echoed his coach’s thoughts and expanded on the leadership that Porter Jr. has provided to an extremely young Georgetown team.

“That’s what’s made this team pretty special,” Lubick said. “We have young guys who see the way Otto works every day while being somebody who’s nationally recognized, and I think that’s been key in having some young guys step up.”

Georgetown needs to fight off any intimidation factor that a Big East road game will surely provide in order to extend its winning streak to seven games. Friday promises to be a low-scoring grind, as both squads pride themselves on solid defense and physical play.

But just because both teams tout sound defense over flashy offense doesn’t make the games any less exhilarating, according to Thompson III.

“I don’t think that the level of play is down,” he said. “Is scoring down? Yes. Is defense better? Yes. It depends on what you appreciate when you watch the game. … Just because scoring has gone down, it doesn’t mean the game is any less exciting.”