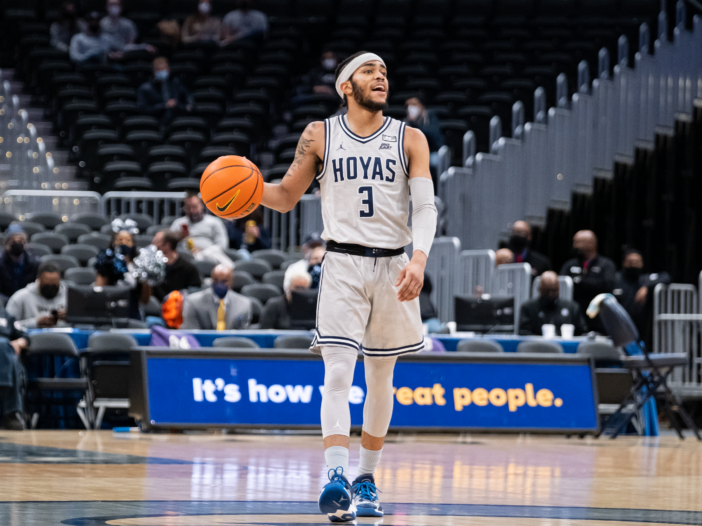 James Akinjo. Mac McClung. Qudus Wahab. These are just a few of the names to leave Georgetown University men’s basketball through the transfer portal in the Patrick Ewing (CAS ’85) era.

And, apparently as is tradition, four more names have been added to that list, as junior center Timothy Ighoefe, first-year forward Jalin Billingsley, sophomore forward Kobe Clark and first-year guard Tyler Beard have entered the transfer portal this year.

While Mohammed still has the option to return to Georgetown, losing him to the draft would be a massive loss for the Hoyas’ hopes next season. Mohammed finished the season as one of three players at Georgetown averaging over 30 minutes per game. He was also the Hoyas’ leading scorer and rebounder.

The five-star recruit seemed to be a likely one-and-done candidate entering college, but Mohammed still needs to polish certain areas of his game. If Mohammed declared for the draft, he would most likely be picked in the second round, if at all, according to the Associated Press.

Of the transfers, Ighoefe had the largest impact on the team this past season. He averaged 15.6 minutes per game, mostly contributing as a rebounder and interior defender.

His departure leaves the Hoyas even thinner than they already were at the center position, with the only other centers on the roster now being first-year Ryan Mutombo and junior Malcolm Wilson. Despite playing limited minutes, Mutombo still managed to average the sixth most points on the team.

With the departure of these four players, only three recruits from the class of 2021 remain on the Hoya roster; that will drop to two if Mohammed decides to go pro.

Billingsley and Beard both played roles coming off the bench this past season. Their departure will hurt more in the future, as both showed promise and were on their way to becoming significant contributors.

Beard took to his Instagram to express gratitude to the Georgetown program while announcing his decision to transfer.

“Big thanks to Georgetown for taking in a kid from the Chi. Y’all took me in and changed my life. Forever grateful…….but with that being said, I will be entering the transfer portal,” Beard wrote.

Clark has dealt with nagging injuries the past two seasons, only playing a total of 21 career games and averaging 4.5 minutes per game, but Hoya fans will still be sorry to see him leave.

Georgetown has struggled to retain players during head coach Patrick Ewing’s tenure, losing stars like McClung, Akinjo and Wahab. The constant turnover has no doubt contributed to the Hoyas’ lack of success, posting only one winning season under Ewing from 2018-19.

There are many questions surrounding Georgetown’s inability to retain players, especially when considering Ewing’s recent contract extension. Despite only leading the Hoyas to the NCAA tournament once in a mediocre 13-13 regular season, Jon Rothstein reported that Georgetown signed Ewing for an extra three years past his original contract.

Many of the team’s issues this past season stem from losing players expected to be key contributors in the transfer portal, like Wahab and Tre King. Instead of building off their surprise run in the tournament, the Hoyas were left with the shell of a winning team.

Coming off the worst season in Big East history does not help on the recruiting trail either. Georgetown currently has one signed player and one committed player from the class of 2022. Filling the roster holes left by transfers and the possible departure of Mohammed would be a major task for Ewing.

Georgetown lacks the recruiting ability of blue bloods such as Duke University, the University of Kentucky and the University of Kansas. NBA-ready players are not going to suddenly start appearing on the Hilltop and lead the Hoyas back to their former standing as a basketball powerhouse.

For the Hoyas to become competitive again, the staff needs to recruit, retain and develop its younger players so they can evolve into serious contributors by the time they are upperclassmen. But with only three players currently considering Georgetown, according to ESPN, it looks as if the Hoyas will continue to struggle retooling for seasons to come.