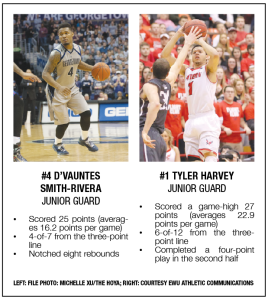 “The kids brought it to me and said, ‘Their coach is guaranteeing victory,’” Georgetown Head Coach John Thompson III said. “I kind of looked down there at [Hayford]. Thought he didn’t foot the bill [of] guys that usually guarantee victory. Our guys were fired up about that.”

Despite the ten-point margin of victory, Georgetown came dangerously close to dropping another game to a double-digit seed in the tournament’s opening weekend.

After holding a 23-point advantage with 9:16 remaining in the second half, the Hoyas went cold from the field and saw their lead dwindle to as few as seven points. But with time on its side, Georgetown, led by junior guard D’Vauntes Smith-Rivera, was able to make enough free throws to hold off Eastern Washington’s vicious comeback and advance to the third round of the NCAA tournament.

“I like the way we came out at the start of the second half and kind of extended things,” Thompson said. “Fortunately we did that because at the end there some of those turnovers almost let — we did let them back in it. But we had enough to hold on.”

There were signs that the matchup against Eastern Washington would be trouble for Georgetown from the beginning of the game. Although Smith-Rivera scored a three-pointer on the team’s second possession, the Hoyas struggled to get into an offensive rhythm.

When senior center Joshua Smith picked up his second foul less than four minutes into the game, Georgetown seemed doomed.

The Hoyas, however, were lifted by an unlikely source — junior center Bradley Hayes. After averaging only 3.4 minutes of playing time during the regular season, Hayes came off the bench and played the final nine minutes of the first half and recorded eight points and six rebounds.

“I’m real proud of Brad,” Trawick said. “We needed that boost he gave us. He came in and rebounded well and he also finished. That was a big spark for us, especially [because] they had a nice little lead on us.”

Meanwhile, the Eagles went cold from the field, only connecting on one of their last seven first-half attempts, which enabled the Hoyas to open up a 43-33 halftime lead.

This momentum carried into the second half. After both teams exchanged baskets, Smith-Rivera got hot, scoring eight consecutive points and extended Georgetown’s lead to 55-35.

From there, the crowd, which supported the Eagles throughout the evening, grew noticeably quiet as the Eagles went almost four minutes without a field goal.In spite of the double-digit lead it faced, Eastern Washington would not go quietly. Led by freshman guard Sir Washington and junior forward Jois Venky, Eastern Washington went on a 10-0 run to close its deficit to 13 points.

Although Harvey, the nation’s leading scorer, scored 27 points on 9-of-20 shooting, the Hoyas held the Eagles to 74 points, six below their season average.

“Their defense was the difference [with] us not having the kind of shooting night I think we could have had,” Hayford said.

The Georgetown defense, which has been among the nation’s best all season, recorded three blocks and was consistently altering shots.

“Georgetown, they’re a really big team. We don’t have those kind of teams in the Big Sky,” Harvey said. “But they’re really long. They’re aggressive on defense. We got a couple open looks. Just didn’t go down for us don’t. … You’ve got to hit shots against them.”

“My teammates got me open,” Smith-Rivera said of his performance. “They were setting great screens. We were just reading what they were doing. We got a little stagnant at times. But overall I think we executed pretty well.”

Georgetown will return to the court on Saturday when it faces the No. 5 seed Utah in the Round of 32. In its second round matchup, Utah, like Georgetown, survived a second-half run by Stephen F. Austin and won 57-50.

“So now, you know, we have a quick turnaround, but they do, too,” Thompson said. “So we’ll be ready. We’ll be ready to play.”