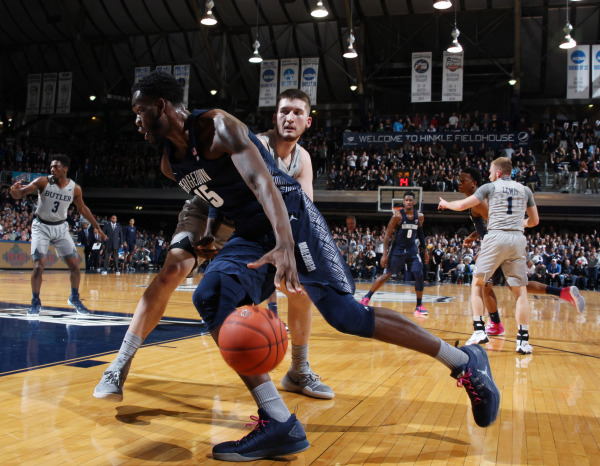 Heading into Saturday night’s game, the then-No. 11 Butler Bulldogs boasted a 12-0 record at home this season and rode a 14-game home winning streak dating back to last year. Georgetown — sitting in second-to-last place in the Big East standings — defeated a top-25 opponent earlier this weekend and looked poised to turn its conference play around.

The Hoyas (12-10, 3-6 Big East) notched their second victory over a ranked team this week, defeating the Bulldogs (18-4, 7-3) 85-81, avenging the 86-71 overtime loss Georgetown suffered earlier this season at home to Butler. Unlike in the teams’ first meeting, the Hoyas grabbed rebounds and hit key shots to escape regulation with the victory.

Three Georgetown players scored at least 20 points for the first time this season, as junior guard L.J. Peak finished with a team-high 22 points and six assists in his 38 minutes of play. After scoring zero points in the loss to Butler three weeks ago, graduate student guard Rodney Pryor shot 50 percent from beyond the arc and had 20 points along with four rebounds.

Sophomore center Jessie Govan continued to show his potential as a player, scoring 20 points on 3-of-3 three-point shooting in 26 minutes off the bench. Committing four turnovers in the Wednesday’s win against then-No. 16 Creighton, Govan cleaned up his mental errors and finished with zero turnovers against Butler.

Neither team was able to build and maintain a lead in the opening half. With 10:10 remaining in the first, the Hoyas held a seven-point lead — which ended up being the largest lead of the game for both teams — but quickly witnessed their advantage shrink to just one point after junior forward Akoy Agau sent junior forward Kelan Martin to the line for a three-point play.

Martin — Butler’s leading scorer — had 16 of his 22 points in the first half on 5-of-9 shooting from the floor. His first half performance helped give the Bulldogs a 41-40 lead heading into halftime.

The second half featured much of the same back-and-forth play of the opening 20 minutes with 11 lead changes and six ties during the final period. With just over four minutes left in the game, the Hoyas began to come up with key finishes on the offensive end and important defensive stops to slowly build a lead.

Off an assist from Peak, Govan cut to the basket to finish with a layup that gave Georgetown a lead it would not surrender. Junior guard Jonathan Mulmore then grabbed a defensive rebound following Martin’s miss, leading to a Peak three which capped off a 7-2 run for the Hoyas.

Protecting a two-point lead, Georgetown attempted to work its offense, and right when it seemed as if it was a wasted possession, Govan hit a three-pointer from the top of the key as the shot clock expired, extending the Hoya lead to five points with 1:05 left in the game.

In the final 2:04 of play, the Georgetown defense held Butler to just 2-of-6 shooting from the floor, with one of the made field goals a layup with one second left in the game. The Hoyas out rebounded the Bulldogs 22 to 19 and restricted Butler’s second chance opportunities late in the game.

While Butler dominated the paint offensively — scoring 38 points within the key compared to Georgetown’s 28 points — the Blue and Gray had the clear advantage in three-point shooting. As a team, the Hoyas connected on 50 percent of their 20 three-point attempts, with Govan, Pryor and Peak combining for nine of those made three-pointers.

The Hoyas look to extend their conference-winning streak to three games as they travel to Chicago to face the DePaul Blue Demons (8-13, 1-7 Big East) on Tuesday night.