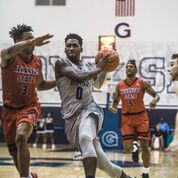 In a New Year’s Eve matinee, the Georgetown men’s basketball team dropped its second straight conference game as the Hoyas’ second-half comeback fell short in an 81-76 loss to the Xavier Musketeers.

The Hoyas (8-6, 0-2 Big East) made a strong effort to cut the Musketeers’ (12-2, 2-0 Big East) lead to as little as two points in the final minute of play. But Xavier caught a break when the referees reversed a call that would have originally given Georgetown a chance to tie the game with 3 seconds remaining.

Early foul trouble and missed free throws plagued the Hoyas throughout the game as they struggled to build and then maintain a lead against a strong Musketeers squad. Georgetown finished the game with 28 team fouls and shot just 61 percent from the free throw line, leaving many potential points at the charity stripe.

While Georgetown’s defense found success in holding Xavier’s junior guard Trevon Bluiett — the team’s leading scorer — to 0-of-10 shooting from the floor, it failed to limit their fouls as the team sent the Musketeers to the line a total of 38 times, compared to just 23 free throws for the Blue and Gray.

However, the Musketeers found offensive success in sophomore guard Edmond Sumner and junior guard J.P. Macura, who both scored over 20 points in the game. Sumner scored a game-high 28 points on 7-of-13 shooting from the floor and 14-of-17 shooting from the free throw line, making as many free throws as Georgetown hit as a team.

“I don’t think they were more aggressive,” Thompson said of Xavier’s advantage in trips to the free throw line.

“That being said, he did a good job of drawing fouls and getting to the line,” Thompson said about Sumner’s play.

After a pair of made free throws by graduate student guard Rodney Pryor gave the Hoyas a 20-19 lead — their first of the game — with 8:06 minutes left in the half, Georgetown struggled to build upon the lead. With 5:10 left in the opening half, sophomore center Jessie Govan committed his third foul of the game, sending him to the bench for the remainder of the half.

The final minutes of the first half featured a small Hoya lineup that allowed junior guard L.J. Peak to excel, scoring nine of his team-high 21 points in the final five minutes of the half.

The second half opened with Georgetown running into more foul trouble as Pryor quickly picked up his third and fourth personal foul of the game five minutes seconds into the half, sending him to the bench for much of the second half.

However, the two-point margin would be the closest the Hoyas could come to tying the game as Sumner went 3-of-4 from the free throw line on Xavier’s next two possessions to extend the lead to five.

Junior guard Jonathan Mulmore — who saw an increase in playing time due to a struggling Hoya backcourt — got fouled with eight seconds left in the game. After nailing the first free throw, Mulmore missed his second, grabbed his own rebound and drew yet another foul with four seconds left.

Again, Mulmore only converted the first free throw, and the rebound on the second shot went out of bounds. The referees originally awarded possession to the Hoyas, but after video review, the call was reversed. Sumner was fouled on the ensuing inbound, sending him to the line for a final time.

“At key offensive possessions, Xavier really executed and got the looks that they needed,” Thompson said of the Musketeers in the game’s final minutes. “I want to say like the five-minute mark, the six-minute mark when all of a sudden their cushion goes to five or seven, which is where today’s game was lost.”

In the second half, the Hoyas allowed eight offensive rebounds — a statistic that continues to haunt them — that led to 12 second-chance points by the Musketeers.

“We have to at key points of the game get key stops, key rebounds,” Thompson said of his team’s failure to pull out on top in close games, particularly in this contest against Xavier. “So there were key points where they would get fouled or they would get a rebound and get a shot and we have to cut that out and limit those.”

With the loss, the Hoyas drop to 0-2 in the Big East, a conference that features five teams in the top-40 KenPom rankings.

The Hoyas’ conference play continues as they travel to face the Providence Friars (10-4, 0-1 Big East) on Wednesday.