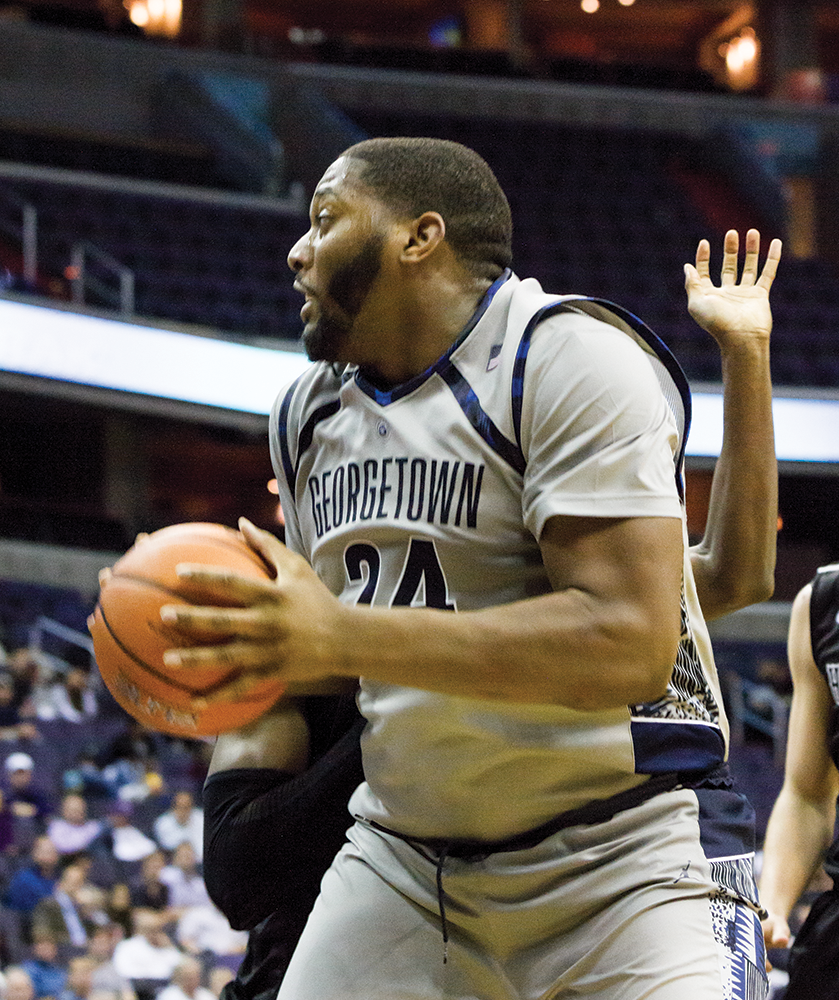 Georgetown may have been playing in front of a sparse crowd, but the Hoyas showed one member why they’re doing just fine without him. After a slow start, Georgetown (5-2) exploded in the second half to take down High Point, 80-45, in front of former All-American and Hoya Otto Porter Jr.
The backcourt led the way for the Hoyas, with sophomore D’Vauntes Smith-Rivera scoring 17 points and senior Markel Starks dropping 18 on an extremely efficient 8-of-11 shooting. The guards combined to dish out nine assists, and Georgetown impressively assisted on 23-of-32 field goals.
“The ball just went in,” Starks said of his shooting spectacle. “I honestly couldn’t tell you why.”
After jumping out to an early 13-4 lead, Georgetown failed to keep up the hot shooting and allowed High Point to fight its way back into the game. Slow starts are becoming the norm for the Hoyas, who clung on to a 27-26 halftime lead against Lipscomb last Saturday.
“We have to snap out of [slow starts] with the first half dragging,” Starks said. “We have the ability, and we can start and finish games on a high note.”
The Panthers took advantage of offensive rebounds and points off of turnovers to scrap their way to within ten points in the closing minutes of the first half. It took senior forward Moses Ayegba, who has received limited playing time this season, to slow the Panther’s run. In 18 minutes of playing time, Ayegba picked up eight rebounds for the Hoyas, five of which came in the first half.
“We did have a stretch where… our execution dipped,” Head Coach John Thompson III said. “Our execution was not where it needed to be. During that lull in the first half, Moses came in and got some key rebounds.”
The second half was a different story, as Georgetown nearly doubled its first half point total thanks to hot shooting from freshman forward Reggie Cameron and solid post play from junior center Joshua Smith. Smith played the majority of the second half in foul trouble, which is an encouraging sign for the Hoyas. Much of Georgetown’s success this year relies on Smith staying on the court for extended minutes.
“[Smith] is a unique player for obvious reasons,” Thompson said. “He understands that and the officials understand that, and he has to be smart. Sometimes times people run into him, and he gets the foul called.”
Smith experienced exactly this scenario several times against a completely overmatched High Point.
Perhaps Georgetown’s best accomplishment was its ability to penetrate a 2-3 zone, something the Hoyas have struggled with previously, most notably in an upset loss against Northeastern Nov. 21. High Point Head Coach Scott Cherry noticed this trend and employed the zone early and often.
“We tried to play the numbers, and the numbers worked against us tonight.” Cherry said. “We can’t let them shoot 62% in the second half and expect to win. Not against a team like that.”
But even when the outside shots were not falling, the Hoyas adjusted in the second half and took advantage of their considerable size advantage to open up opportunities for shooters and cutters.
“[Going inside] was what we wanted to do,” Thompson said. “I thought they would play a lot of zone, and we wanted to make an effort of going inside. We had a few different looks we were working on.”
Senior guard John Caprio provided an exclamation in the closing minutes of the Georgetown blowout. After a monstrous block, Caprio converted on the other end and drew a foul, bringing the Verizon Center to its feet.
But perhaps Hoya fans should come to expect strong play from Caprio, which has come in spurts over the previous few seasons – albeit in limited minutes
“Caprio is a very good basketball player, and his coach hasn’t given him as much time as he probably should to prove that,” Thompson said. “There’s nothing he did that surprised us tonight.”
Caprio has paved the way for a new fan favorite – sophomore walk-on David Allen, who got four minutes of playing time at the end of the game.
Georgetown looks to build off its recent success when they continue their homestand against Colgate tomorrow. Tip-off is slated for noon. 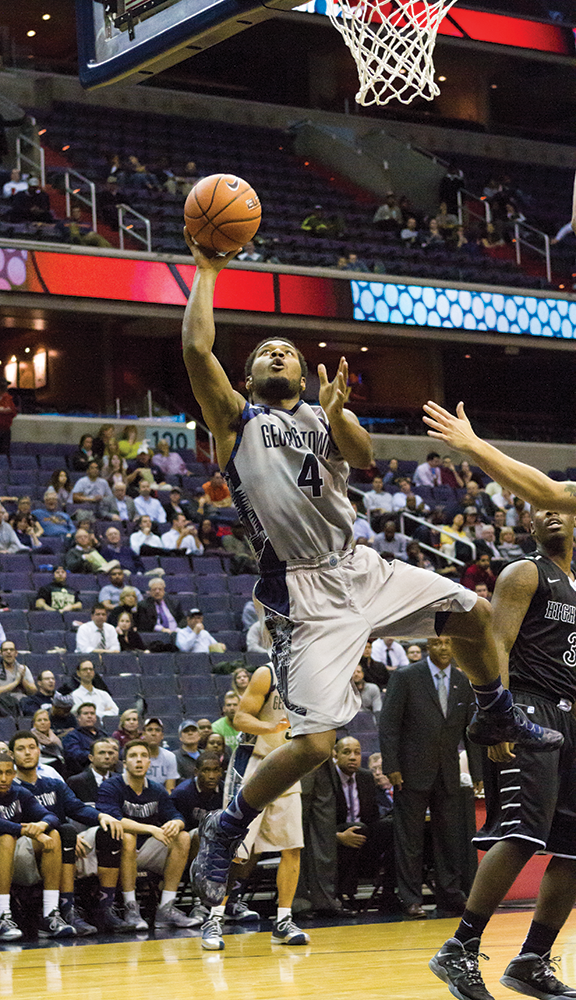