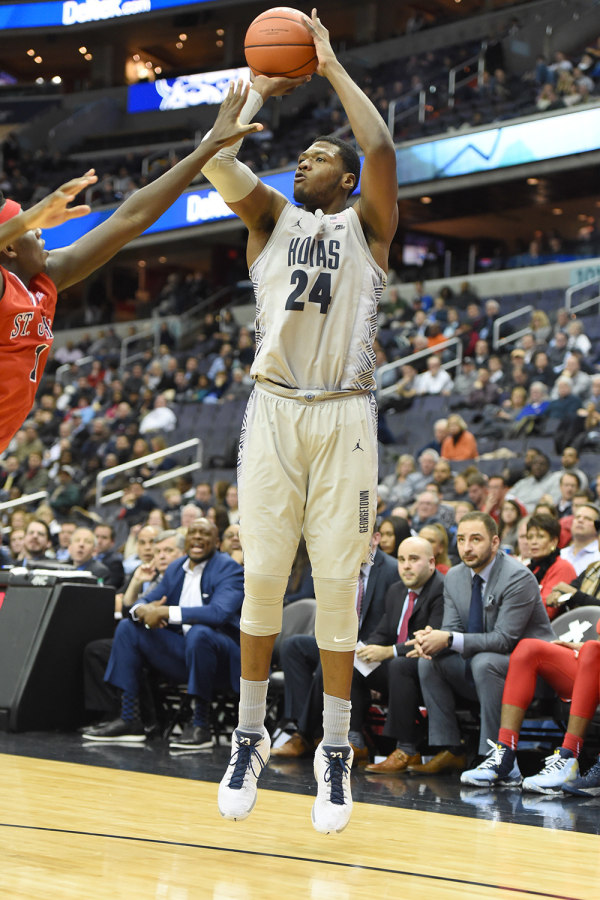 “I was just looking for good opportunities to be aggressive within the offense,” Pryor said of his offensive effort. More impressive than his offensive stat line, however, was his defensive performance, grabbing eight total rebounds — including five on the defensive glass — and adding three steals.

“I told the guys right after the game that maybe as much as any time this year they listened and executed our defensive game plan,” Thompson said. “I think our defensive execution tonight is moving toward where it needs to be.”

The first 20 minutes of the game went back and forth as neither team could establish an offensive rhythm. Georgetown’s defense prevented St. John’s from building a lead, holding the Red Storm to 20 percent three point shooting and blocking six shots in the first half.

However, turnovers and fouls stifled the Hoyas’ momentum, giving the Red Storm the ability to keep the game within single digits for the entire first half. An offensive foul by junior guard Jonathan Mulmore led to a Peak foul on the other end, allowing St. John’s to cut the lead to just three with 4:29 remaining in the half.

Yet the Georgetown offense found their stroke beyond the arc, finishing the half going 4-of-5 after starting the game 0-of-5 from three. Sophomore forward Marcus Derrickson, who finished the game with 11 points, closed out the half with a three to give the Hoyas a 44-37 lead.

Coming out of the locker room, the Hoyas took advantage of defensive miscues and poor shooting by the Red Storm in the opening minutes of the second half to build and maintain a healthy lead for the remainder of the game.

Georgetown came out strong, going on a 19-2 run in the first 10:47 minutes of second half, giving them a comfortable 63-79 lead. The Hoyas’ defense overwhelmed the Red Storm, forcing a total of seven turnovers during their monumental run. St. John’s shooters struggled in the half as they went a combined 5-of-25 from the floor — including 2-15 from three — in the game’s remaining 20 minutes.

“They lead our league in three’s made and I think a lot of them were, sometimes people just miss, but I think we made them miss,” Thompson said of limiting the Red Storm’s perimeter shooting. “I think overall our defensive execution tonight is moving toward where it needs to be.”

The depth of the Hoya’s backcourt continues to grow as freshman guard Jagan Mosely once again displayed his on-court poise, adding 13 points behind 3-of-5 shooting from the floor, following up on his career-high 20 points Saturday.

“He’s been someone I can count on from Day One,” Thompson said of the young guard. “He gives 110 percent every possession and he has a hardness to him.”

The defensive mindset worked for the Hoyas as they controlled the tempo of a conference game for the first time this season. Georgetown outrebounded St. John’s 50-30 and held them to just three second chance points in the game.

“The rebounding is part of defense and understanding we have to finish a possession,” Thompson said. “Our guys were focused today, as a unit, not individually, but we were focused as a unit.”

Georgetown’s next game is this Saturday as they host the Connecticut Huskies in a non-conference battle.