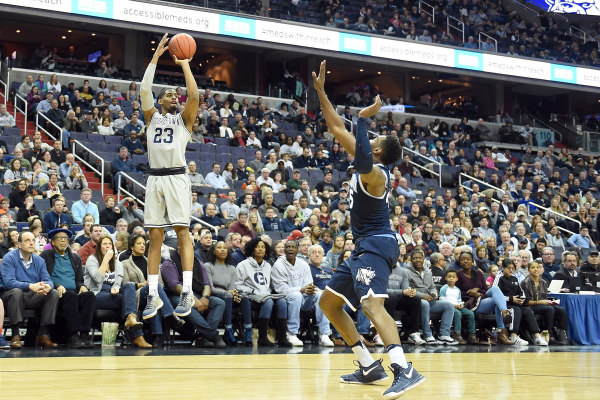 Cheers filled the Verizon Center, and the thousands of Villanova fans who made the trip down for the game took away any home-court advantage from Georgetown, as the reigning champions delivered an 81-55 defeat during Georgetown’s Senior Day on Saturday.

“They share the game,” Georgetown Head Coach John Thompson III said of Villanova’s offense. “They have good offensive players who are selfless in that they don’t really care who scores.”

“He clearly is a worker. On the court, in the contest, I don’t know if there’s anyone in the country who plays as hard as him. For four years now, he’s given his teammates confidence and energy,” Thompson said.

Graduate student guard Rodney Pryor matched Hart’s 21 points on 7-of-19 from the field and 3-of-9 from three-point range in addition to his seven rebounds in his final Georgetown home game. Yet, an inconsistent offensive effort by Pryor’s supporting cast limited the Hoyas’ scoring.

Junior guard L.J. Peak played much of the game in foul trouble — appearing for just 12 minutes despite starting the game — and scored a season-low two points on 1-of-3 field goal shooting.

“I’ve said before, most of the year, for us to win, we need L.J., Rodney and a third person to play well. For L.J. to be so limited today with foul trouble against this team, where he normally draws the toughest defensive assignment, hurt us at both ends of the court,” Thompson said.

In the opening half, Georgetown could not find the secondary scoring it needed to keep pace with Villanova. Through the game’s first ten minutes, three Hoyas scored baskets — Pryor with 13 and Peak and sophomore center Jessie Govan with two each. The Blue and Gray’s inability to score was in part due to its 12 turnovers in the half.

“It killed us. We’re talking about a team, an offensive team like that and we can’t have careless turnovers. I don’t want to say that was the key to the game, but it really hurts,” Thompson said.

The second half began with much of the same, as the Hoyas turned the ball over three times in the first two minutes. Georgetown managed to keep Villanova’s lead to single digits for the initial ten minutes of the closing half until Hart nailed two consecutive three-pointers in a span of 33 seconds to extend the Wildcat lead to 15 with 7:09 remaining. Villanova never looked back as Georgetown’s defense floundered.

The 26-point defeat — Georgetown’s largest loss to Villanova since the 1949-50 season — caps off a 5-13 conference season, the worst under Thompson. When the “Fire Thompson” chants began to erupt from the student section, things got tense as former Hoya Tyler Crawford (COL ’08) allegedly verbally threatened a student.

When asked if the discussion of the program’s future served as a distraction for the team, Georgetown’s Sports Information Director Mex Carey stepped in before Thompson could answer, requesting for the media to ask “game-related questions” only.

With an NCAA Tournament at-large bid out of the question, Georgetown turns to the Big East Tournament for its one shot at making the Dance. Pryor called for his teammates to erase the 0.278 winning percentage from their memory and enter the tournament with a fresh outlook.

“We just have to have a new mindset, a new slate.  We’ve got to win four,” Pryor said.

The Big East Tournament begins March 8 and will be held at Madison Square Garden in New York City.