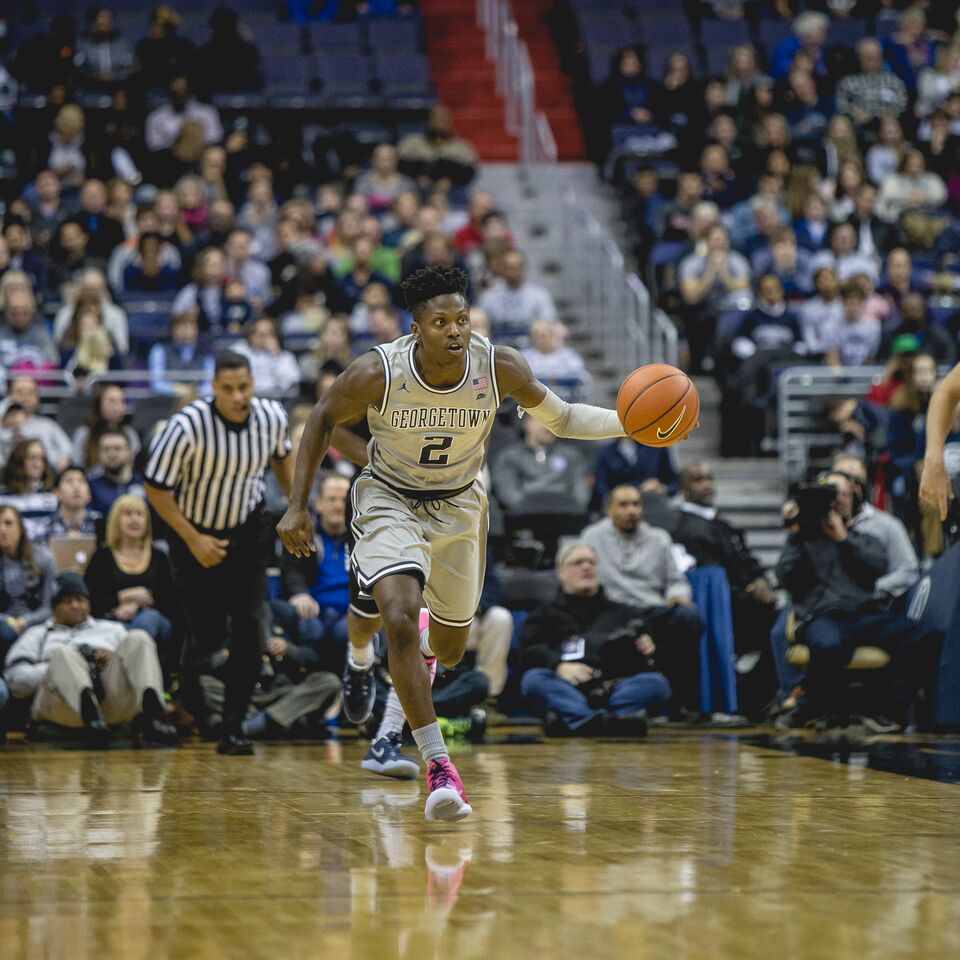 The Hoyas (9-8, 1-4 Big East) snapped their season long four-game losing streak in a 83-55 win against the St. John’s Red Storm (8-10, 2-3). Georgetown’s shutdown defense held the Red Storm to only five field goals in the second half, granting the Hoyas a much-needed victory.

“We kind of knew we were going to win before the game,” junior guard Jonathan Mulmore said of the team’s confidence. “We just came and practiced with a different effort and mindset.”

Facing off against an old Big East rival, the Hoyas look to carry the momentum into their game against the Huskies (7-9, 2-3 AAC). Despite being in different conferences, the meaning behind the game remains equally important to both the players and coaches.

“We’re going to treat it as a Big East game,” freshman guard Jagan Mosely said. “Obviously with the tradition of the old big east and the rivalry between Georgetown and UConn, we want to come out on top and make a statement.”

“I think it’s much like Syracuse. It’s a game, it’s a series, that has down to the years meant a lot, and it still does,” Thompson said. “Without a doubt, our paths have been intertwined and there’s so many memories of Georgetown-Connecticut games and hopefully that will continue.”

Georgetown’s defensive game plan must focus on slowing down Connecticut’s leading scorer, sophomore guard Jalen Adams. Adams is a strong offensive threat, averaging 15.2 points per game. Even more impressive is Adam’s ability to find ways for his teammates to score, as he averages 6.2 assists per game.

“He knows he has to have the ball in his hand,” Thompson said. “I think especially in the last two games he’s done an outstanding job of helping his teammates.”

Despite Adam’s talents, Connecticut as a team struggles offensively, scoring only 65.6 points per game, which ranks them 10th in the American Athletic Conference. However, the Huskies have dominated the glass, averaging 38.2 rebounds per game as a team including four players who average at least five rebounds per game.

Offensively for the Hoyas, sophomore forward Marcus Derrickson has become a consistent weapon for the Hoyas, scoring double-digit point totals in six straight games. Mosely has also enjoyed success of late, following his 20-point career high performance with 13 points against the Red Storm.

“It’s just having confidence from day one,” Mosely said of his improved performance. “When you’re in a slump you just have to push through and keep playing.”

Having four days without a game leading up to Saturday, Georgetown has been able to spend multiple days at practice developing a game plan and mindset to pull out a victory against Connecticut.

“Our focus in practice has been on intensity, finishing plays, defending, scouting reports and just executing what Coach says,” Mulmore said.

Tip off is set for 12 p.m. Saturday at the Verizon Center. The game will be broadcasted on Fox.