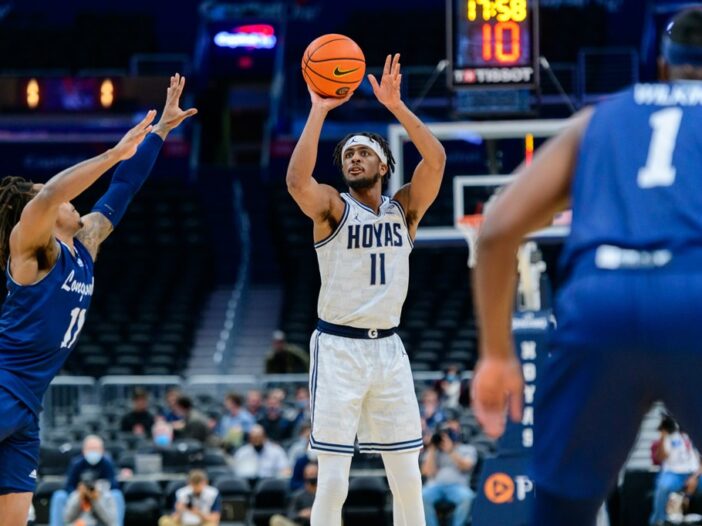 The Hoyas (3-3) and the Longwood University Lancers (4-4) squared off on Tuesday night at Capital One Arena, with Georgetown aiming to win its third consecutive home contest. It was only the second meeting on the hardwood between the two schools, the first a blowout Hoya victory in 2012.

From the start, it was clear that this win would be nowhere near as easy as the first one. The Lancers exploded out of the gate with a 3-pointer on each of their first three possessions, stunning the home crowd and causing Georgetown Head Coach Patrick Ewing (CAS ’85) to use his first timeout just under three minutes into play to regroup his squad.

After the game, Coach Ewing said that the Lancers presented a challenge for the team.

“Longwood’s a very good team,” Ewing said in a postgame press conference. “They have a lot of seniors that played, and played well for them.”

Nevertheless, the Hoyas were able to find answers on offense throughout the first half. Graduate forward Kaiden Rice buried three shots from beyond the arc to trim the Lancer lead, including one with 5:34 left in the half to tie the game at 24 apiece. Under two minutes later, first-year guard Aminu Mohammad stole the ball from Longwood guard D’Avian Houston and accelerated down the court for an open layup, giving the Hoyas their first lead of the game.

By the time the half ended, Georgetown held a 36-31 advantage. The Hoyas headed into the locker room looking to preserve their 2-0 record in games where they led at the break this season.

True to form, the momentum stayed with Ewing’s squad at the start of the second half. Georgetown’s lead ballooned to 14 within the first six minutes, largely due to a perfect 10-for-10 performance from the Hoyas at the free-throw line over that period. Georgetown was automatic from the charity stripe all game, posting a 27-for-33 mark on the night.

Though Georgetown seemed destined for a comfortable victory, Longwood found its second wind. The Lancers mounted a furious comeback in which they rattled off 13 unanswered points, culminating with a layup from guard Nate Lliteras to bring Longwood within just one point of the Hoyas.

The two sides traded blows until the final two minutes, when the crowd exploded after a pair of spectacular left-handed finishes from Holloway and sophomore guard Dante Harris. The dagger came with 24 seconds left when graduate guard Donald Carey swung the ball to Rice on the right side, who swished his fifth 3-pointer of the night to put the Hoyas up 7.

The Georgetown offense finished with a season-high 91 points, with 55 in the high-octane second half alone. Before the game, Longwood had allowed its opponents an average of just 60.3 points per game, the best mark in the Big South conference, making this offensive performance especially impressive.

Holloway paced the Hoyas all evening, shooting a terrific 7-for-9 from the field and a flawless 7-for-7 from the line. His effort headlined a 29-point effort from the Hoya bench, besting their Longwood counterparts by 12.

In a post-game press conference, Holloway emphasized the role of the whole team in the victory.

“My coaches and teammates got me in the right spot,” Holloway said. “I just made the shots, that’s all it was.”

After leaving the game early in the second half with an injury to the nose, Mohammed returned to record another stellar outing, notching his second double-double of the season with 15 points and 11 rebounds. Rice, Carey and Harris each scored as well in the double digits, making Tuesday the first time five Hoyas have achieved that feat in a single game this season.

Junior starting center Timothy Ighoefe left the game with an apparent hand injury in the first half and did not return. He will undergo X-rays on Wednesday.

The Hoyas will look to continue their winning ways on Sunday when they visit their first major-conference foe of the season, the South Carolina Gamecocks (5-2), at 2 p.m. Dec. 5 at the Colonial Life Arena in Columbia, S.C.