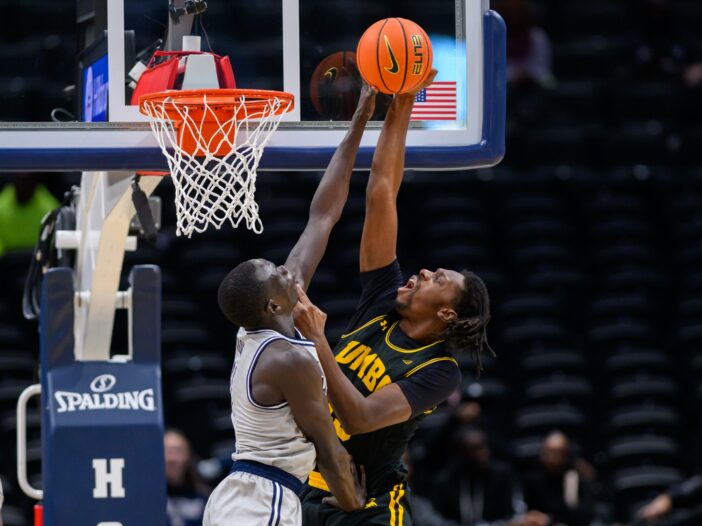 As their lead trickled away, the Georgetown men’s basketball team faced a conundrum as defenders crowded the Hoyas’ side of the court with unrelenting pressure. Sophomore guard Primo Spears, searching for an open man, deftly passed the ball to graduate forward Bryson Mozone, opening a chain of passes that eventually found junior guard Wayne Bristol Jr. completely open. Bristol Jr. leapt and converted an emphatic two-handed dunk, sealing the Georgetown victory for good.

After falling to American University (5-2) on Nov. 23 for the first time in 40 years, the Georgetown Hoyas (4-4) looked to bounce back against the University of Maryland, Baltimore County (UMBC) Retrievers (4-4) at home. Without sophomore guard Brandon Murray, who was out with a lower-body injury, the Hoyas turned to Bristol Jr. for the start in a lineup shuffle.

A string of turnovers set UMBC up seven points to start the game, as Georgetown’s defense was slow to respond. Impatience marked Georgetown’s play early in the game — the Hoya defense over-helped on certain players, allowing UMBC to simply turn to its other, wide-open players. The Retrievers, a team built upon multiple experienced shooters, took advantage of this defensive disarray, sinking five 3-pointers within the first 10 minutes of the game.

The Hoyas began to pace themselves better as the game progressed. Junior guard Jay Heath was the initial focal point of the offense, going on a hot streak of five straight field goals, three of which were 3-pointers. Mozone was also instrumental in helping Georgetown reestablish its tempo, providing solid ball movement across the court.

These adjustments helped the Hoyas slowly inch their way back from their initial deficit, as they turned a 19-27 scoreline with 10:47 remaining in the first half to a 26-28 tally just two minutes later. Spears became the focal point from then on, scoring 10 points in the remainder of the first half to provide much of Georgetown’s remaining offense.

Although Georgetown’s defensive problems persisted, UMBC was unable to replicate its previous success with shooting 3-pointers in transition, instead failing to capitalize on Georgetown’s mistakes and make open shots. The Retrievers were bailed out by a sloppy finish by the Hoyas to close out the half, and both teams clung on to a 42-42 tie at halftime.

Undeterred, the Hoyas took their first-half faults to heart going into the second half, applying considerable pressure on the Retrievers. Georgetown locked in on the defensive side of the ball, using quick rotations and heavy man-to-man pressure to erase any open opportunity for UMBC’s shooters. The Retrievers looked out of sync and hurried as a result, throwing multiple errant passes and missing numerous contested shots to go on a dismal 0-for-12 field goal streak.

Led by Spears’ excellent play, the Hoyas took full advantage during this stretch to open up a 16-point unanswered scoring spree. A powerful dunk by senior center Qudus Wahab exemplified Georgetown’s sheer dominance, exploding the Hoyas to a 58-42 lead with 14:25 left to play.

UMBC regained some confidence after a pair of free throws by guard Matteo Picarelli put an end to Georgetown’s scoring monopoly. Even then, the Hoyas maintained their lead deep into the second half. Junior forward Akok Akok was stellar on defense and applied constant pressure on the Retrievers, highlighted by a beautiful swat that marked his third block of the game. Heath stayed aggressive and opened up chances for Georgetown’s scoring along with Spears, who continued his offensive production. Following a beautiful spin move and floater by Spears, the Hoyas were up 73-57 with just 4:58 to go.

The Retrievers did not want to leave quietly, though. As Georgetown’s defense snapped back into old habits, UMBC players were left open. Picarelli found a magic stroke and downed 3 shots from downtown, leading a 13-2 run to bring the game to 75-70 with 0:34 left.

It was too little, too late. A Bristol Jr. dunk and 2 free throws ended the game, securing a 79-70 win for Georgetown.

The Hoyas’ success largely came from their ability to adapt quickly and maintain pressure deep into the match. Following a four-game stretch in which Georgetown was outscored by a total of 69 points in the second halves, the stronger man coverage that they displayed against UMBC was a welcome change. The Retrievers, coming off of a game in which they made 17 field goals beyond the arc, only made 10 against the Hoyas despite their hot start.

Following the win, Georgetown traveled to Lubbock, Texas, where it fell to Texas Tech (5-2) 65-79 on Nov. 30 after its second half comeback fell short. Next, the Hoyas face off against the University of South Carolina Gamecocks (3-4) at Capital One Arena on Dec. 3.