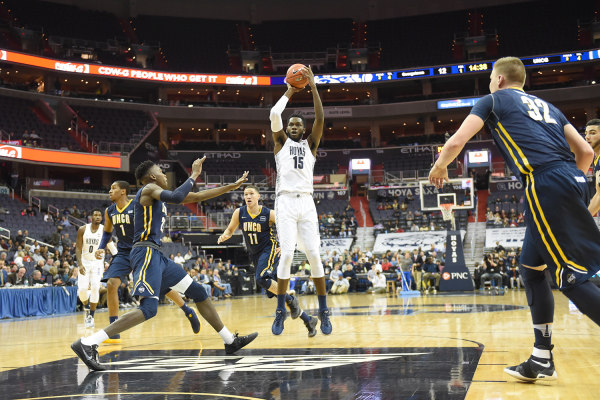 Rocking all-white uniforms in front of the Verizon Center faithful, the Georgetown men’s basketball team handled the UNC-Greensboro Spartans, cruising to a 78-56 victory.

While the Hoyas (8-4) played far from perfect on the offensive end — 13 total turnovers — the team made up for it on the defensive end, playing stellar on-ball defense and forcing the Spartans to take tough shots, as the visitors shot 28.2 percent from the field. Junior guard L.J. Peak was given the task of defending sophomore guard Francis Alonso, the Spartans’ leading scorer.

“He might sleep through Christmas with the effort that he puts out and for several games now,” Georgetown Head Coach John Thompson III said of Peak’s defensive efforts. “There is nothing loosey-goosey about his presence on defense.”

The Hoyas attempted to set the tone of the game early on. Freshman guard Jagan Mosely weaved through the Spartan’s defense, finished with a soft touch, drew the foul and converted on the foul shot to give the Hoyas’ the first points of the game.

Turnovers, however, plagued Georgetown’s offense early on — the team turned the ball over seven times in the first half — giving UNCG plenty of opportunities to stay in the game. Yet poor first-half shooting limited the Spartan’s chances of cutting into the Hoyas’ lead.

For a 9:22 minute stretch beginning at the 14:52 mark of the first half, the Spartans failed to make a field goal. The Hoyas took advantage of the Spartans’ lack of offensive execution to build a 17-point lead during the scoring drought. UNCG’s senior center R.J. White took matters into his own hands and finished out the half shooting three-of-three on the floor to cut the Hoyas’ lead to 34-26 with 1:23 minutes left in the half.

“I told our guys coming into this game, and I don’t say this to offend anyone else, but he might be the best offensive post player we’ve played this year,” Thompson said of the senior.

Georgetown guard Kaleb Johnson and center Jessie Govan — both sophomores — closed the half with three-pointers, giving the Hoyas a 40-26 cushion heading into the half. The Hoyas held the clear advantage in three-point shooting, converting on 55.6 percent of their threes while the Spartans missed all seven of their three point attempts.

An Alonso layup put the Spartans nine points behind the Hoyas at the 18:08 mark of the second half — the final time the Georgetown lead was in single digits. Exactly a minute later, sophomore guard Marcus Derrickson hit his first three-pointer of the game, giving Georgetown a 60-43 lead.

Derrickson reemerged as an offensive threat in the second half, scoring 13 of his 15 points in the game’s final 20 minutes. The 15 points are a season high for Derrickson, who missed three games earlier this season due to injury.

“I wasn’t letting the game come to me,” Derrickson said of his early season woes. “I was trying to force and hunt and force shots in. It just wasn’t falling. This game, I just relaxed and calmed down, knowing I was going to get them.”

Graduate student Rodney Pryor — who was held scoreless in the first 12 minutes of the second half — made his presence known with an energizing two-handed slam, springing the Hoyas to a 10-0 run with 7:46 remaining in the half.

The win highlighted the scoring depth this Georgetown team possesses, with four different Hoya scorers reaching double-digit point totals. A huge reason for that was Govan’s ability to spread the Hoya offense and get open shots.

“It opens a lot for our offense,” Govan said of the ability for big men like himself getting open shots. “Our guards feel comfortable in throwing to us on the perimeter and they’re confident in us to knock it down.”

Govan ended the game with 20 points on 9-of-13 shooting from the floor and 2-of-2 shooting from beyond the arc. The sophomore finished with 10 rebounds — good enough for his second consecutive double double — and excelled on the defensive end with four blocks.

The victory stretched the Hoyas’ season-high winning streak to six games and provides momentum for the team as it prepares to enter a tough conference schedule.

“I feel like we just stayed together,” Govan said of the team’s recent success. “We came together and we know what happened last year and we don’t want that to happen again. We knew we had to put together some wins and hopefully we can keep that going into Big East play.”