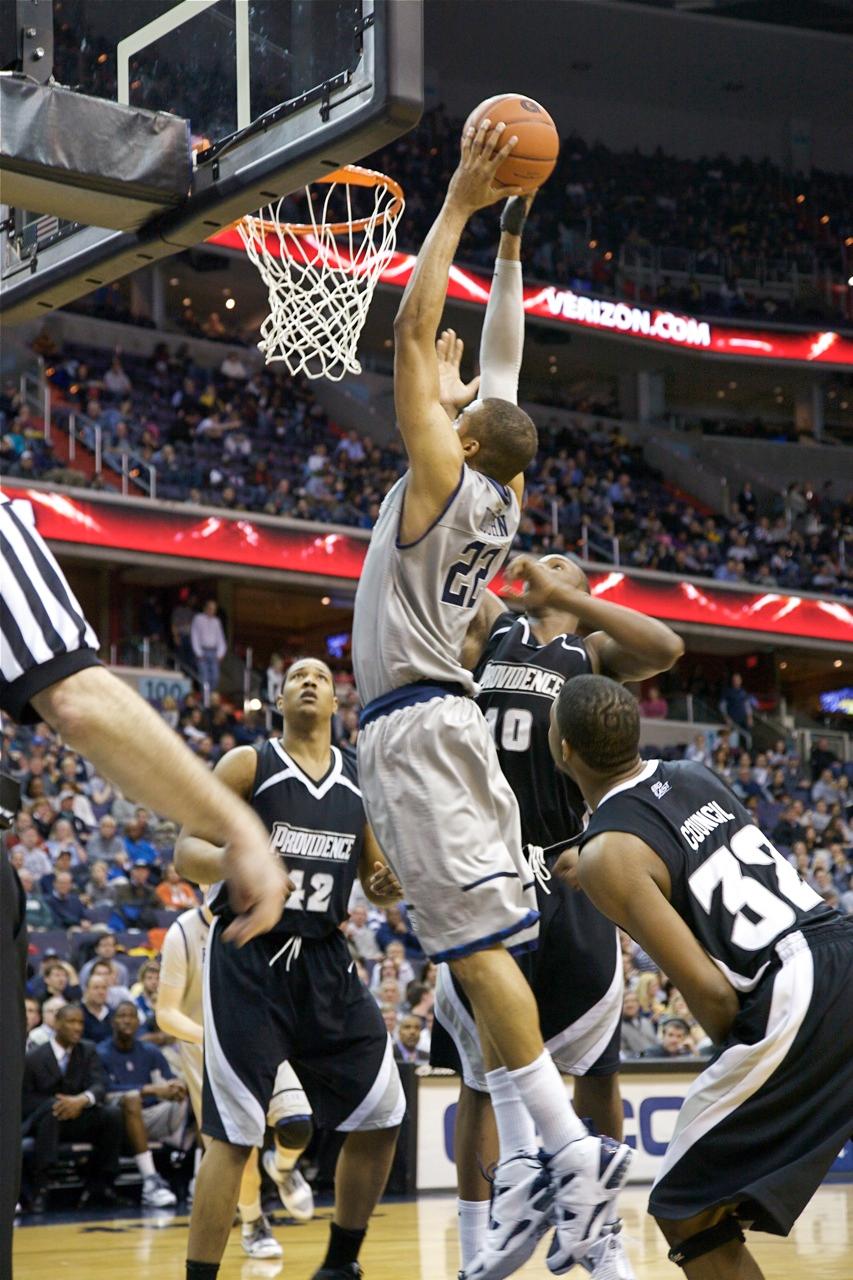 “[Brooks] is a special player who had a special day, it’s as simple as that,” Head Coach John Thompson III said after the game. “He scores in every way possible. … He’s a good player who was having one of those days.”

“He’s very tough to guard because he uses his length to his advantage,” senior guard Chris Wright said of Brooks, who also pulled down 10 rebounds. “That was probably one of the best performances I’ve seen since my freshman year with [Stephen] Curry.”

The win was the sixth straight for the Blue and Gray, who have stated their case to be reinstated to the top 10 when the polls come out on Monday after victories this week over No. 14 Louisville and now Providence.

The Hoyas jumped out of the gates quickly, riding scintillating shooting over the first 20 minutes to a 12-point halftime lead. The Hoyas made their first three shots — all from three-point range — en route to an 8-for-15 performance from deep in the opening stanza, in which they shot 17-for-33 from the floor. Junior guard Jason Clark was particularly deadly, pouring in a team-leading 14 points on 5-of-5 shooting, including four threes. Wright chipped in 12 points and three assists, while spending much of his time defending Brooks, who missed only four shots and kept the visitors in the game with 24 points in the first half.

The second half started as the first half ended, and Georgetown’s lead ballooned to 18 with 17:35 left. It looked like the rout might be on, but the Friars answered quickly and in bunches. Led by Brooks and Duke Mondy, who had 11 of his 19 points in the second half, Providence worked its way back into the game.

“They just keep coming,” Thompson said of the Friars. “We had a key stretch there where we were making decisions to take quick shots. That’s not to say we don’t want to take quick shots, but sometimes when a team is making a run you want to make them work at the defensive end.”

The Hoyas missed all 11 threes they took in the second half and were an abysmal 11-for-21 from the free throw line. By the time the 10-minute mark rolled around, their seemingly insurmountable lead had been cut to six and the momentum was firmly in the visitors’ hands.

“We were getting open shots in the second half,” Clark said. “[But] they just weren’t falling.”

A pair of seniors stepped up to save the Hoyas from the embarrassment of blowing an 18-point lead at home. From the 7:37 mark into the final minute of the game, Freeman and Julian Vaughn scored all 16 of the Hoyas’ points, highlighted by an emphatic and-one dunk by Vaughn that got the restless Verizon Center crowd back into it.

“[The Friars] were making a conscious effort to take away the three-point line,” Thompson said. “When you do that … it means our cuts are going to be open or you’re going to be one-on-one in the post. … [Vaughn] was one-on-one and Providence had no help because everyone was spread out, and he was very effective.”

Despite missing six of his 12 free throw attempts, Vaughn finished with 14 points and 11 rebounds and provided typically solid defense.

“I just try to play hard every day and make the right plays,” he said after the game. “There are a lot of perimeter threats on this team, so when other coaches decide to guard them close, then I am one-on-one in the paint and I just try to make plays for us to help us win.”

The Friars whittled the lead down to two several times and even pulled within one on a layup by Brooks with 10 seconds left, then again four seconds later when the senior made two free throws. Wright was fouled immediately on the ensuing inbounds pass and had a chance to make it a three-point game but missed his first free throw. After hitting his second, he atoned for the miss by stealing the ball at halfcourt from Brooks as he frantically tried to get close enough to attempt a game-tying or game-winning shot.

“I think everybody in the gym knew that [Brooks] was going to shoot the ball,” Wright said. “So I just left my man, kept my eyes on the ball and tried to make a play.”

With that play made, Wright jumped on the loose ball and sent the already loud Verizon Center crowd into an uproar as the final seconds ticked off the clock, and the Hoyas escaped with their third straight victory of three points or less.

“I’m glad our fans were here,” Thompson said. “I think the energy we feed off them is real and tangible. … When we needed them to be good, they were good today.”

It does not get any easier for the Hoyas, though, as they next travel to New York to face archrival No. 17 Syracuse on Wednesday.