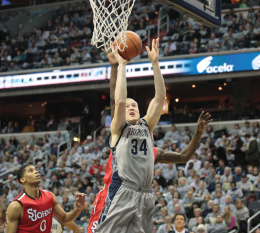 The Georgetown men’s basketball team (16-4, 6-3 Big East) is hoping that Rutgers (12-9, 3-7 Big East), whom it faces Saturday, will prove an easier opponent than last year’s edition did.

It was only current sophomore Otto Porter Jr. and his clutch free throws at the end of regulation — which came as a result of a questionable off-ball foul — that allowed theHoyas to edge the Scarlet Knights 52-50 at Verizon Center in Jan. 2012. Now, after completing their season sweep of longtime rival St. John’s, the Blue and Gray will hit the road for the first time in more than two weeks when they make the trip up to Piscataway, N.J.

Following a week-long break — their second longest layoff of the entire season — the Hoyas are hoping to avoid the offensive rust they faced earlier in the year when Georgetown put up just 48 points at Marquette following a two-week break. But Head Coach John Thompson III does not anticipate the time off having a significant impact on the game.

“It’s pretty much a normal week,” Thompson III said. “It just gives our guys a chance to catch up on studies.”

Points will be at a premium against a Rutgers team desperate for a win. The Scarlet Knights have lost their past five games but tend to elevate their level of play at the RAC — only having allowed visitors to surpass the 70-point barrier three times all year, including an impressive 67-62 win over Pittsburgh Jan. 5.

“They have three very good guards who are all interchangeable,” Thompson III said. “They all can score. This is another team where … we have to know where they are on the floor.”

The Hoyas are currently riding a four-game winning streak, which includes victories at then-No. 24 Notre Dame and against then-No.5 Louisville.

“Are we coming along? Yes, we’re coming along,” Thompson III said. “The guys, particularly on the defensive end, are in a groove, but we’ll see how much of a groove we’re in against those guards [Saturday].”

Despite losing sophomore forward and defensive ace Greg Whittington, Georgetown has actually clamped down on defense, holding opponents to a lower field-goal percentage. As tough as it may have been to predict when Whittington was suspended, the Blue and Gray have more than compensated for his 12 points and seven rebounds per game.

To do so, Thompson III has dug deeper into his bench, often relying on unusual lineups to step up. Freshman guard D’Vauntes Smith-Rivera — renowned for his scoring and passing abilities — has grabbed four more rebounds per game since Whittington’s suspension, while redshirt sophomore forward Aaron Bowen has increased his scoring and rebounding averages in almost nine additional minutes of playing time. Sophomore forward Moses Ayegba has stepped up in a major way as well.

Not every player, however, has earned more playing time; sophomore forward Mikael Hopkins has had a difficult time filling the Henry Sims role in the offense, as he has been forced to constantly play out of position. The Maryland native has shown flashes of the player he could be, brandishing a couple nice moves in the post against St. John’s early on in the game. Hopkins has also done a better job of limiting his turnovers in recent outings, but he still needs to make strides to earn back the minutes he received earlier in the year.

“I’ve said there for two years now. … Otto’s reliable,” Thompson III said. “He brings it every night, and I don’t anticipate that changing throughout his career. Otto’s one of the best players in the country.”

Containing Rutgers’ trio of sophomore guards — Eli Carter, Myles Mack and Jerome Seagears — will be key for Georgetown. If the Hoyas can use their length to bother the shooters on the floor, they will put themselves in a good position to win the game. But the Blue and Gray also need to be sure to track down long rebounds, of which there will surely be many.

Tip-off is set for noon Saturday in Piscataway, N.J.