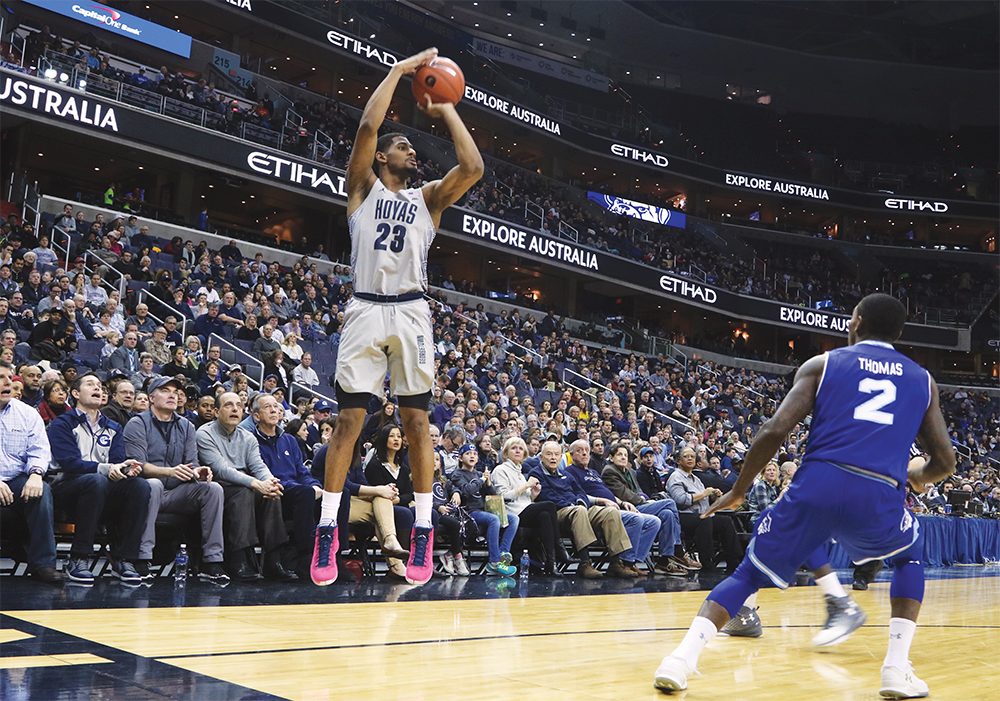 After dropping two consecutive Big East games, the Georgetown men’s basketball team once again finds itself near the bottom of the conference standings. With six games remaining, the Hoyas have the opportunity to make a jump in the standings as they host the Marquette Golden Eagles this Saturday at the Verizon Center.
On Tuesday night, Georgetown (13-12, 4-8 Big East) put itself in a position to make a statement in the conference against No. 2 Villanova (23-2, 10-2 Big East). The Hoyas erased a 15-point deficit to cut the lead to two with two minutes in the game. However, Georgetown failed to come up with defensive stops to win. The reigning champions remained undefeated at home this season, handing the Blue and Gray a 75-64 defeat.
“We got down big. I liked the way our guys fought to get back in the game, and then we just didn’t get over the hump at the very end,” Georgetown Head Coach John Thompson III said.
The Golden Eagles (15-9, 6-6 Big East) enter Saturday’s contest after watching their own comeback bid fall short against the
No. 22 Butler Bulldogs (19-5, 8-4 Big East), losing in a close margin 68-65 at home.
Georgetown kicked off its conference schedule at Marquette earlier in December, suffering a 76-66 loss. Freshman guard Markus Howard scored a game-high 23 points for the Golden Eagles and referred to the Hoyas’ defense as “lazy” in a postgame interview with Fox Sports 1.
In the first matchup, Georgetown had15 turnovers — an area that has plagued the team all season. While graduate student guard and leading scorer Rodney Pryor finished with 23 points in the contest, he also committed a team-high four turnovers.
To improve their chances of winning, the Hoyas must limit their turnovers and be efficient on offense.
Marquette’s high-powered offense — which ranks second in the Big East with 82.9 points per game — relies heavily on its perimeter shooters. The Golden Eagles boast the conference’s best three-point percentage at 42.4 percent. Howard’s 51.9 percent three-point percentage ranks first in the conference and junior guard Andrew Rowsey’s 47.2 percent ranks fourth.
Thompson acknowledged his opponent’s ability to shoot threes, and he emphasized the importance of preventing the Golden Eagles from developing an offensive rhythm.
“They’re going to go on a run. With the way they’re put together — with their shooters and scoring — they’re going to go on a run and we just have to make sure when that happens we try to get good offensive possessions down on the other end,” Thompson said.
Georgetown’s defense stresses the importance of limiting three-point opportunities and holding its opponents to an average of 32 percent three-point shooting, ranking second in the conference. Expect junior guard Jonathan Mulmore to play a majority of the game, as his speed and agility will likely be called upon to guard against efficient Golden Eagle shooters.
Against Villanova, Georgetown struggled to find scoring from its bench, as five bench players combined for nine points in the loss. However, starters Pryor and junior guard LJ Peak were the sole Hoyas to reach the double-digit point mark, scoring 20 and 21 points, respectively. In order to counter Marquette’ explosive offense, Georgetown’s role players must step up and contribute consistently to the offense.
Marquette’s defense has also caused concerns for teams, as it averages a conference-leading 7.6 steals per game, which helps preserve a positive turnover margin for the team. In comparison, the Hoyas average 5.6 steals per game — which ranks last in the conference — while sporting a negative 1.1 turnover margin.
“They’re likely going to be mixing up defenses, so we’re going to have to be ready for multiple defenses. We just got to find a way to try to — and I know most people haven’t been successful so far — to slow them down a little bit,” Thompson said of Marquette’s aggressive defense.
With the Big East Tournament approaching, Thompson recognizes there are multiple areas of improvement for his team in order to prepare for the challenges ahead.
“We just have to work on us. As difficult as your opponent is, we still have to keep improving as Georgetown,” Thompson said.
Tipoff is set for 12 p.m. on Saturday at the Verizon Center. The game will be televised on Fox.