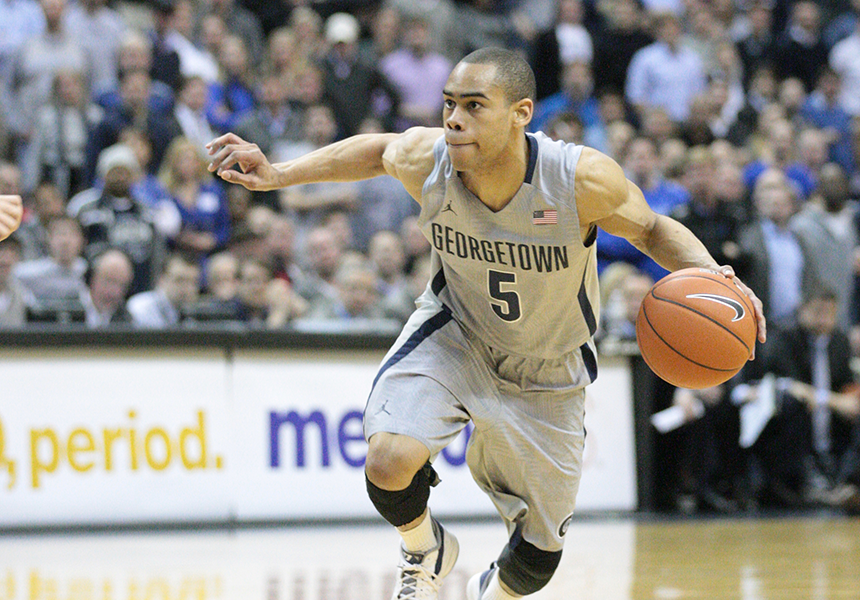 To say this season has been an uneven one for the Hoyas may be an understatement, but this Georgetown team could be saving its best for last.

Georgetown dismantled No. 13 Creighton with a 75-63 victory on senior night. In all, eight Hoyas were honored — three managers and five players: forward Nate Lubick and center Moses Ayegba and the seasoned backcourt of John Caprio, Aaron Bowen and Markel Starks.

In an emotional night, Starks — the team’s undisputed leader and most consistent player — once again led the Hoyas with 17 points, 11 assists and three steals. He saved his best for crunch time, hitting a silky pull-up jump shot and knocking down some clutch free throws to seal the win.

“This is a group, and [Starks] is a player,that we’re going to miss,” Head Coach John Thompson III said. “We plan on him playing a few more games in a Georgetown uniform before it’s all said and done.”

Starks wasn’t the only Hoya with impressive numbers, though. Sophomore guard D’Vauntes Smith-Rivera found his shooting stroke and added 18 points and 12 rebounds – a career high.

Georgetown was most impressive on the defensive side of the court. A combination of Bowen and junior forward Mikael Hopkins held All-American senior forward Doug McDermott — who passed Danny Manning for eighth all time in points scored during the game — to 22 points on 9-of-23 shooting.

“You can’t stop Doug McDermott,” Thompson said. “To be honest, I thought … we did an outstanding job on him, but he still ended up with 22 points.”

For the most part, the Hoyas were able to make strong defensive stands because they stayed out of foul trouble. Against Marquette, Hopkins picked up four fouls in just 12 minutes while Lubick and Ayegba fouled out. However, Tuesday, playing against a highly touted offensive Creighton team, those same three big men combined for just five fouls.

“I think [Hopkins] was key,” Thompson said. “Last game against Marquette, our frontcourt got into some foul trouble … but it was important today because Mikael … with his mobility and size can make things difficult for McDermott.”

This discipline carried over to the offensive end as well, where Georgetown turned the ball over just seven times — a number Creighton almost matched in the first half alone.

Now, Georgetown needs to prove it can build on perhaps its best win of the season with perhaps its toughest test — a regular season finale at No. 6 Villanova.

In the teams’ first matchup — a 65-60 Villanova win at Verizon Center — Georgetown failed to do so much of what led to its victory over Creighton. The Hoyas turned the ball over 18 times and recorded 23 fouls.Just as important, Georgetown only made nine trips to the free- throw line compared to 23 for Villanova.

One of the biggest differences between the Georgetown team that will take the court this Saturday and the squad that lost to Villanova is personnel: Junior guard Jabril Trawick made his return from a broken jaw against the Wildcats, but he only saw 12 minutes of playing time. Since then, the Philadelphia native has emerged as a viable third scoring option and provided his usual tenacious defense.

“Having [Trawick] out there adds in a lot of ways — not just as it relates to depth — just because of his toughness and his size, he can guard up [and] he can guard down,” Thompson said. “His intensity, his attitude is infectious and everybody feeds off it. He helps to give everyone else on our team courage.”

Georgetown will need all the courage it can muster to squeak out its first road win since its 71-59 win at DePaul over a month ago. In all, the Hoyas only have two true road wins all season, the second of which was a 70-67 overtime victory at Butler on Jan. 11. DePaul and Butler combine for five conference wins between the two of them — fewer than any other team in the Big East.

While Georgetown has struggled to find consistency since the teams’ last meeting, Villanova has cruised through Big East play — with the exception of Creighton, who accounts for the Wildcats’ only two conference losses. Villanova easily handled conference opponents Butler and Marquette at home. Most recently, Villanova outlasted Xavier for a 77-70 win. With the win, the Wildcats clinched the Big East regular season championship.

It has taken almost an entire season, but it seems these Hoyas may have finally found out their basketball identity. Thompson certainly thinks so.

“I think we now know how to skin the cat,” Thompson said. “Now we just have to go do it.”

Tipoff is slated for 2 p.m.