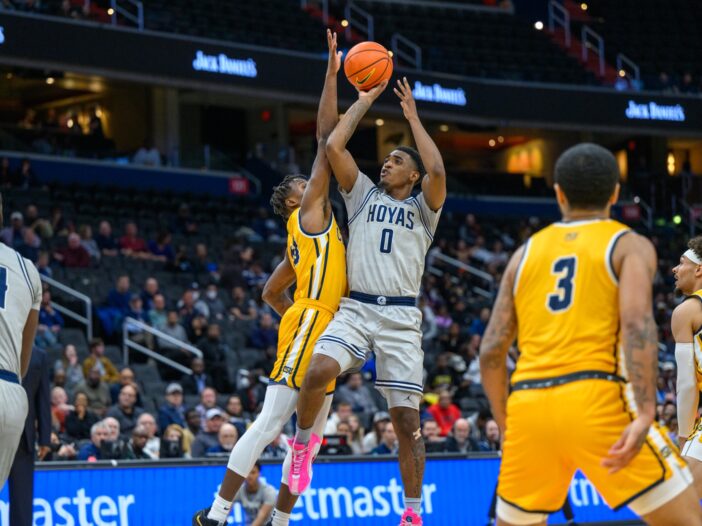 The Georgetown Hoyas snapped a 21-game losing streak dating back to last season with a 99-89 overtime win against the Coppin State Eagles in the opening game of the Hoyas’ 2022 campaign.

Students crowded the buses to Capital One Arena ahead of the 8:30 p.m. tipoff to support the brand-new group of Hoyas (1-0), with every member of the night’s starting five added through the transfer portal in the offseason. The Georgetown faithful gave a particularly warm welcome to senior center Qudus Wahab, a member of the Hoyas’ 2020 Big East Tournament Championship team whose return to the Hilltop comes following a one-year stop at the University of Maryland.

The first half was a frenetic back-and-forth affair with the two sides matching each other every step of the way. After the Hoyas finally managed to open up a modest 5-point lead, Coppin State (0-2) sophomore guard Nendah Tarke sank a 3-pointer with just one second left in the first half. Georgetown went to the locker room clinging to a narrow 36-34 advantage.

The Hoyas’ upper hand quickly evaporated in the game’s second half, as the Eagles powered their way to a 61-54 edge with just over nine minutes left to play. However, Head Coach Patrick Ewing’s (CAS ’85) group rallied, and a jumper and lay-in off the glass from sophomore guard Primo Spears put Georgetown back in front by 3 points with under 40 seconds remaining.

Forced to foul, Coppin State sent sophomore Hoya guard Brandon Murray to the line with 10 seconds left. Both free throws rattled off the rim, giving Tarke a chance to tie the game with a 3-point heave as time expired. Although his attempt skittered off of the back of the rim, the ball fell into the hands of guard Mike Hood, who swished a 3-pointer to beat the buzzer and force overtime.

Thankfully for the home crowd, Coppin State struggled offensively in the extra period, succumbing to a Hoya onslaught led by Spears. The former Duquesne standout’s 6-point showing in the extra period went towards a team-high 28 on the night, and Georgetown ended up notching its first win in 327 days by a comfortable 10-point margin.

The game was also quite a debut for Georgetown junior forward Akok Akok, who transferred to the program following two seasons at Big East rival UConn. Akok recorded a double-double with 18 points and 12 boards. He also added 5 blocks on defense.

Following the game, Ewing said that although his squad has room for improvement, the team weathered a roller coaster of a season opener.

“It wasn’t the way we wanted to win, but we got the win,” Ewing said at a post-game press conference. “We made mistakes, we got down, we fought back, we were up, we were supposed to foul at the end and we didn’t, but we were able to come away with the win.”

The Hoyas will look to defend home court once again Nov. 12 at 11 a.m when they take on Horizon League challenger Wisconsin-Green Bay (0-1).