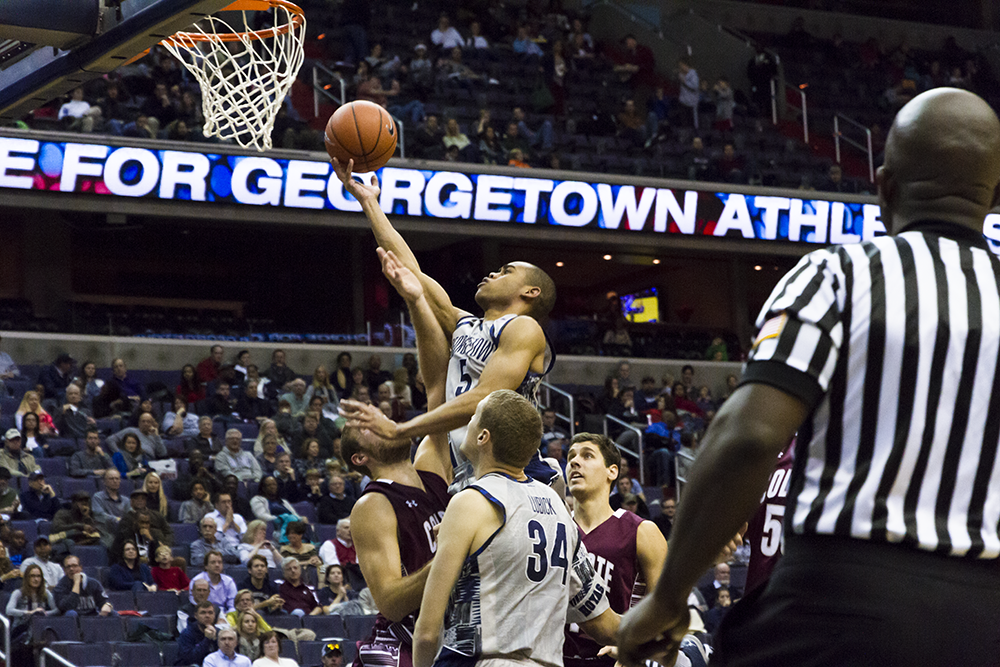 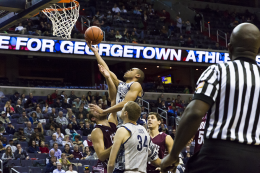 Georgetown Head Coach John Thompson III insisted before this season that a slate of competitive lower-profile teams made this year the hardest nonconference schedule he’s ever seen.

Both teams started the game ice cold from the field, but Colgate was particularly bad. It took the Raiders (4-3) nine full minutes to get on the board despite entering the game as the best three-point shooting team in the country. The Hoyas couldn’t take advantage of the cold spell, however, scoring only 10 points in the same span.

“I wanted to be up 100-0,” Thompson quipped when asked if he’d rather his team took advantage of Colgate’s slow start.

Georgetown’s struggles continued as the half progressed, even as their opponents found their shots. The backcourt duo of Starks and sophomore D’Vauntes Smith-Rivera- dominant in previous games – was painfully ineffective, and the Raiders smothered Smith with double- and triple-teams in the paint.

“We played the numbers a little bit, took a couple of chances and really tried to load up on not letting those guys get going,” Colgate Head Coach Matt Langel said.

Junior forward Mikael Hopkins provided some energy off the bench, most notably when he stripped a Colgate guard at the top of the key and dribbled the length of the floor for a rim-rattling dunk. The Hoyas entered the break with a 21-15 advantage but couldn’t find an answer for Raider guard Austin Tillotson (11 first half points).

Georgetown regrouped after the break, pounding the ball inside with Smith and senior forward Nate Lubick possession after possession. Their low-post dominance opened up driving lanes for the guards, and before long the Hoyas built up a double-digit advantage.

“I thought we did a good job getting Lubick the ball,” Thompson said. “We have to get him the ball down there, because he scores at an efficient rate.”

But Colgate wasn’t finished quite yet. Georgetown committed a series of ill-advised fouls midway through the half, and the home lead evaporated as quickly as it had appeared. Lubick stopped a 9-0 Raider run with a pair of hook shots, but the prospect of a comfortable win was long gone.

Colgate got as close as four points in the game’s closing minutes, but Smith’s size and Starks’ quickness proved too much for the visiting squad. The Raiders resorted to desperation fouling in the closing minutes, and the Hoyas iced the game from the line.

Colgate is the type of team Georgetown has struggled with in the past several NCAA tournaments – that is to say, an experienced, balanced team hailing from a little-heralded conference and loaded with three-point specialists. Thompson acknowledged that the game should help prepare his team for the tournament, though he was far from pleased with the performance.

“I don’t think they played well enough to earn the right to come talk to you guys,” Thompson said when asked why no players attended the postgame press conference. “Our group has to play a lot smarter [and] make better decisions.”

Mental mistakes and poor shooting made for an undoubtedly frustrating game. But for a team that’s already dropped a game to a low-major school this season, there was comfort to be found in a simple win.