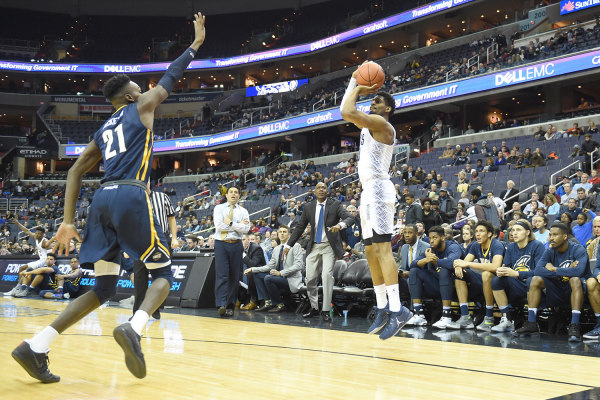 Finishing their nonconference slate with six straight victories, the Hoyas now turn toward their Big East Conference slate when they travel to Wisconsin to take on the Marquette Golden Eagles on Wednesday.

Georgetown (8-4) looks to transfer its momentum from its nonconference schedule into a competitive Big East schedule.

In its previous game against UNC Greensboro (9-4), Georgetown saw four of its players reach double-digit point totals. Amongst them was sophomore center Jessie Govan, who scored a game-high 20 points — tying his season-high total — and added 10 rebounds to notch his second consecutive double-double.

Govan was selected to the Big East Weekly Honor Roll for his individual effort in the game against the Spartans. Along with his double-double, Govan took care of the ball, finishing the game with zero turnovers for the third time this season.

Sophomore forward Marcus Derrickson regained his confidence against the Spartans and scored a season-high 15 points, hitting 3-of-5 three-pointers. For the Hoyas to compete against tough Big East foes, Derrickson must continue to demonstrate his three-point shooting ability.

The Golden Eagles (9-3) have found success against relatively weak opponents, as only two of their victories this season have come against teams in the top 100 of the KenPom.com rankings. Marquette lost its only game against a top-25 opponent, falling 93-84 to then-No. 17 Wisconsin (11-2) earlier this month.

Marquette features a high-scoring offense that ranks 19th in the nation in points per game with 85.9. As a team, the Golden Eagles are shooting 49.8 percent from the floor and 40.3 percent from beyond the arc.

Fischer also leads the team in rebounding with 5.9 rebounds per game, including 2.6 offensive rebounds per game. Govan and the rest of the Hoya frontcourt need to emphasize boxing Fischer out and limiting the Golden Eagles’ second-chance scoring opportunities.

On the defensive end, Marquette has forced an average 15.7 turnovers per game while Georgetown has struggled to limit turnovers this season, averaging 14.7 turnovers per game. Govan needs to continue his success in limiting turnovers, and the rest of the Hoyas need to control the ball in order to compete against an aggressive Golden Eagle defense.

Tipoff is set for 8:30 p.m. at the BMO Harris Bradley Center in Milwaukee, Wis. The game will be televised on Fox Sports 1.