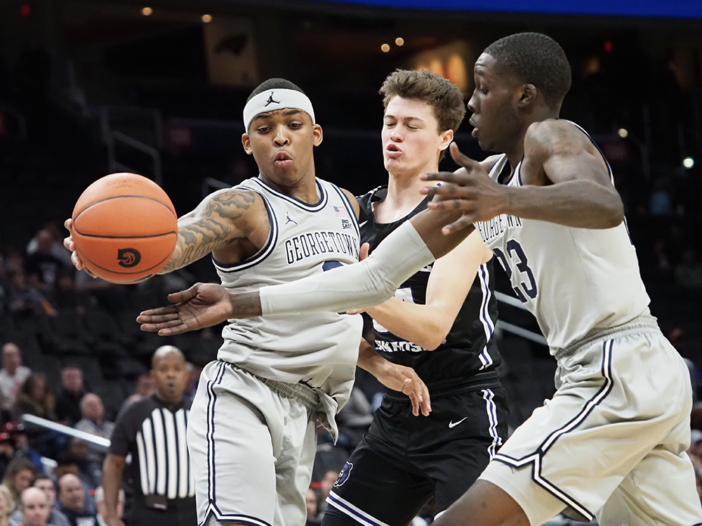 Head Coach Patrick Ewing (CAS ’85) announced Dec. 2 that LeBlanc and former sophomore guard James Akinjo will no longer be members of the men’s basketball team for the remainder of the season. Their removal is separate from the allegations, which do not involve Akinjo, according to a Dec. 3 statement from Director of Intercollegiate Athletics Lee Reed.

On Nov. 5, a student plaintiff filed a civil complaint against LeBlanc, alleging he burglarized her off-campus residence Sept. 16 and has since threatened physical harm against her and her roommate.

“He continued to threaten me verbally and via text message in the following week,” the Nov. 5 complaint read. “We continue to fear for our personal safety and well-being.”

The complaint also names Alexander as an involved party in the burglary.

Also on Nov. 5, the plaintiff filed a motion to obtain a temporary restraining order against Alexander and LeBlanc. Alexander and LeBlanc were served papers to appear in court for two separate hearings but did not attend either hearing. The plaintiff’s application for a temporary restraining order was granted by the Superior Court of the District of Columbia on Nov. 14.

The first plaintiff’s roommate filed a separate complaint against Gardner on Nov. 12, alleging Gardner had sexually assaulted her at her home Sept. 15. The complaint names Gardner as well as Alexander and LeBlanc as participants in the Sept. 16 burglary.

A Playstation 4, two controllers, a Nikon camera, a camera lens and a pair of shoes were reported stolen from the property, according to a Nov. 4 Metropolitan Police Report.

Gardner denied any involvement with the crimes described in the Nov. 12 complaint, according to The Washington Post.

“I don’t know who you’re getting that from, but I’ve never done those things in my life,” Gardner said in a Dec. 2 interview with The Washington Post.

The departure of Akinjo and LeBlanc from the team comes after the players expressed interest in transferring from the university, according to Reed’s statement. Akinjo has led the team in minutes played and assists recorded as the starting point guard, according to ESPN.

These developments come amid proliferation on social media of a list of alleged perpetrators of violence at Georgetown including predatory behavior, coercion, rape and physical assault.

No formal disciplinary action against any of these students has been disclosed. The university does not comment on individual students because of the Family Educational Rights and Privacy Act, according to Reed.

Basketball players are not granted special treatment in disciplinary processes, according to a Dec. 4 statement from Ewing.

“I address this because I don’t want there to be any question about the culture of Hoya basketball. The G we wear on our uniforms is about much more than basketball,” Ewing wrote. “It’s about a culture that expects the best of our players, both on and off the court. Having a strong culture is also about respecting and supporting those members of our community who come forward to report misconduct.”

The university requires that all student athletes complete education on interpersonal violence and sexual assault, according to Reed.

“Please know that we are deeply committed to the integrity of our athletics program,” Reed’s statement reads. “We aspire for our student-athletes to exemplify the excellence and integrity of the Georgetown community and will continue to work to achieve this mission.”

Alexander, Gardner and LeBlanc did not respond to The Hoya’s requests for comment.