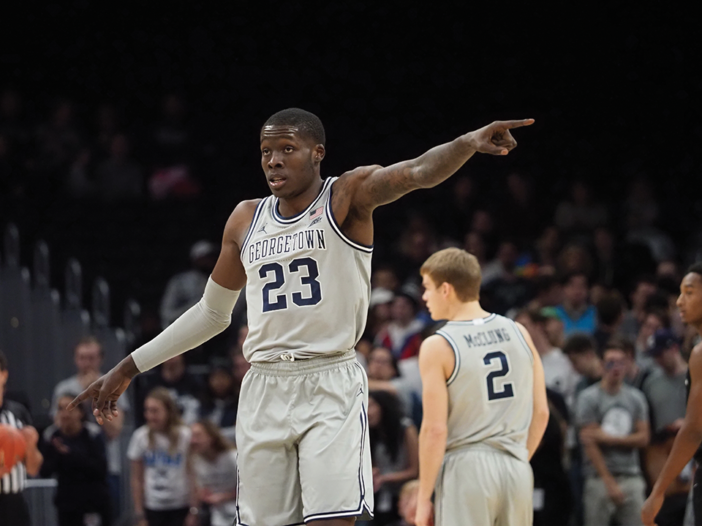 Georgetown University men’s basketball players Galen Alexander (COL ’21), Myron Gardner (COL ’23) and former forward Joshua LeBlanc (MSB ’22) resolved a complaint against them in the Superior Court of the District of Columbia on Dec. 9.

The civil complaint, which included allegations of burglary, sexual harassment and assault against a Georgetown student in an off-campus residence, was filed on Nov. 12. At the hearing, the defendants and the plaintiff agreed to a Consent Stay Away Order Without Admissions. This agreement, which will expire Dec. 9, 2020, states that Alexander, Gardner and LeBlanc cannot contact the plaintiff or her roommates in any manner and must stay at least 50 feet away from them and their home.

The agreement does not indicate any admission of guilt from the defendants, Gardner’s attorney Cynthia Goode Works said in an interview with The Washington Post. Alexander and LeBlanc chose to represent themselves in court, according to court documents.

Although the university cannot comment on specific student cases due to the Family Educational Rights and Privacy Act, the university acknowledges the agreement, according to a university spokesperson.

“We are aware that four Georgetown students mutually agreed to sign a Consent Stay Away Order Without Admissions that will be in effect through Dec. 2020,” a university spokesperson wrote in an email to The Hoya. “We understand that the judge specified that signing the order was not an admission of guilt from any party to the agreement.”

On Nov. 12, a student plaintiff filed a complaint against Gardner, alleging Gardner had sexually assaulted her at her home Sept. 15 and burglarized her home Sept. 16. The complaint also names Alexander and LeBlanc as participants in the burglary.

A Playstation 4, two controllers, a Nikon camera, a camera lens and a pair of shoes were reported stolen from the property, according to a Nov. 4 Metropolitan Police Report.

The Nov. 12 complaint was one of two complaints filed against members of the men’s basketball team. A separate civil complaint filed Nov. 5 against Leblanc accuses him of burglary and of threatening physical harm against her and her roommate. The complaint names Alexander as an involved party in the burglary.

On the same day, Nov. 5, the plaintiff applied for a temporary restraining order against Alexander and LeBlanc. The order was granted by the Superior Court of the District of Columbia on Nov. 14.

The Dec. 9 complaint resolution comes after men’s basketball Head Coach Patrick Ewing (CAS ’85) announced Dec. 2 that LeBlanc and former player James Akinjo (COL ’22) would no longer play for the men’s basketball team for the remainder of the season. LeBlanc’s departure is separate from the allegations, which do not involve Akinjo, according to a Dec. 3 statement from Director of Intercollegiate Athletics Lee Reed.

Both Alexander and Gardner played in the Dec. 4 basketball game, assisting the Hoyas’ in their 81-74 victory at Oklahoma State University. The forwards also contributed to Georgetown’s 91-74 win at Southern Methodist University on Dec. 7.

Alexander declined to comment about the resolved complaint. Gardner and LeBlanc did not respond to The Hoya’s requests for comment.