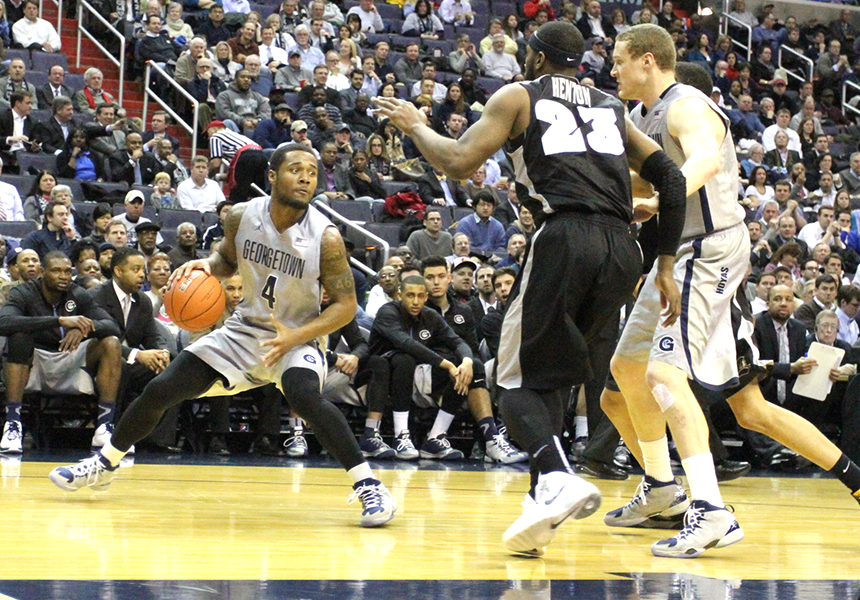 The last time Georgetown played Providence — a 70-52 loss just over a month ago — the Friars sent the Hoyasinto an uncontrollable free fall. Now, Georgetown (15-9, 6-6 Big East) is still digging itself out of the hole left by its long losing streak, and Monday’s 83-71 victory at Verizon Center is another step in the right direction.

After battling back and forth for the opening seven minutes of the first half, Georgetown turned up the defensive intensity to separate itself from Providence. The Friars scored just two points in a six-minute stretch in the heart of the half, and the Hoyas took a 27-15 lead with seven minutes remaining in the first half.

“Cotton is unbelievable,” Head Coach John Thompson III said. “He put on a show tonight that he puts on almost every time he steps onto the court.”

Sophomore guard D’Vauntes Smith-Rivera — who broke out of a recent shooting slump and had his own spectacular offensive performance — was awarded the difficult task of guarding Cotton during that particular stretch and was left speechless by the Providence guard’s performance.

It seemed like a story Hoyas fans were all too familiar with: Georgetown takes a double-digit lead in the first half and promptly hands it back to its opponent. It certainly was the formula in the Hoyas’ five-game losing streak.

But perhaps this team has finally turned the corner, and on Monday night it proved that it has plenty of fight left.

Georgetown immediately worked to close the gap and found offense in Cameron, whose two big jumpers led to five key points for the Hoyas. Cameron also knocked down clutch free throws down the stretch to finish with 11 points.

The teams remained deadlocked until a couple of offensive rebounds turned into easy baskets for the Friars, who took a seven-point lead with 10:25 left in the game.

That would be their largest lead of the night.

Senior guard Markel Starks, who finished with 14 points on a relatively inefficient 6-of-15 shooting, hit one of his two three-pointers on the other end. Starks suffered a brief scare when he fell to the court while grabbing his knee, but two minutes later, the veteran returned to the court.

After a big defensive stand, Smith-Rivera knocked down a big jumper and Hopkins followed with two free throws that tied the game at 54 with 8:29 remaining.

Down the stretch though, it was Georgetown that came up with the loose balls and big rebounds — something it had struggled to do in the beginning part of conference play.

“We didn’t come up with the 50-50 balls,” Cooley said. “They had two offensive rebounds that turned into six points at a critical stretch.”

From there, the Hoyas sealed the game on free throws and clutch shooting. Trawick, who is still working his way back from a broken jaw, was especially effective. His three-pointer with 3:09 left in the game put the Hoyas up seven, and he was 6-of-7 from the line down the stretch.

“We have different guys stepping up and making plays,” Thompson said. “Jabril’s three was a big shot, and he made his foul shots at the end.”

The Hoyas are starting to execute on the details of the game — timely rebounds, free throws and big defensive stops — and are finding a formula for wins in the process.

“The way this team is built, we can’t turn the ball over,” Thompson said. “We have to get to the foul line and limit their second shots.”

Now, Georgetown must focus its efforts on St. John’s in order to extend its winning streak to five. While the Hoyas are starting to string together wins, the memory of the five-game losing streak is still fresh in Thompson’s mind.

“This team never doubted [that they could turn around],” Thompson said. “We just had to figure out how to do it. The guys stuck with it and kept working, but we still are in the hole — still digging our way out of it.”