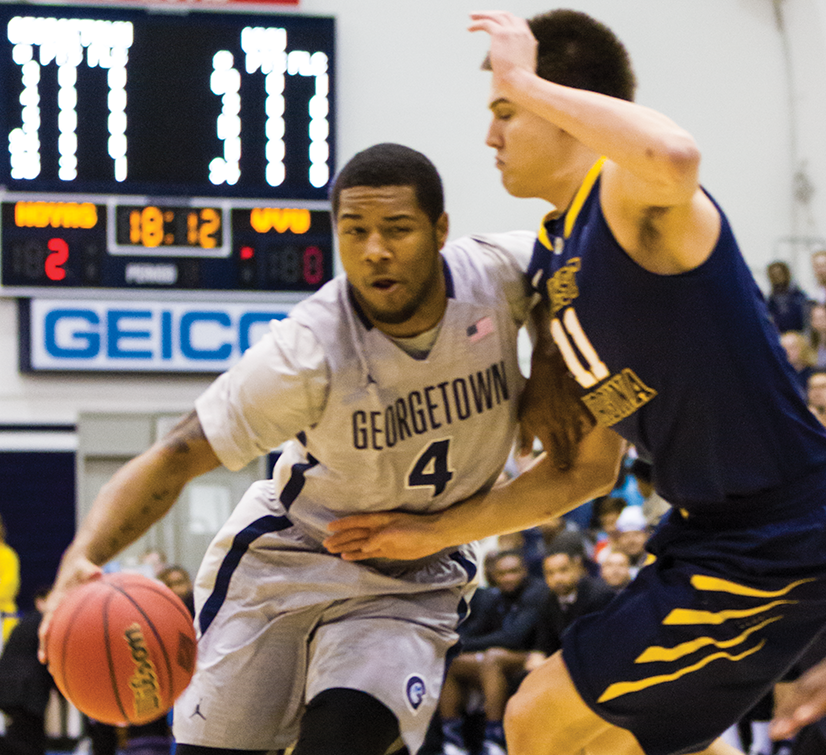 After taking down former Big East rival West Virginia in front of a raucous crowd at McDonough arena, Georgetown (18-14, 8-10 Big East) now looks to keep its NIT hopes alive when it travels to Tallahassee to take on Florida State (20-13, 9-9 ACC) on Monday night.

In the first round, the Hoyas took advantage of a hot second half to move past the Mountaineers (17-16, 9-9 Big 12). It was the first time Georgetown had played a game in McDonough since 2009, and the team fed off the crowd’s energy and relied on tough defense to limit West Virginia’s opportunities.

“Without a doubt, the energy we got from the fans and students … was great,” Head Coach John Thompson III said. “It was a great environment.”

As it has all season, the backcourt led the way. Sophomore guard D’Vauntes Smith-Rivera topped all scorers with 32 points — his season high — while also picking up 10 rebounds for his second double-double of the year. Senior guard Markel Starks added 14 points on top of seven assists and seven rebounds — a career high that earned him a high-five from Thompson after the game.

For Starks, the location of the game and the history of the venue were especially important.

“To finally play a game here means a lot,” Starks said. “I wanted … to let [the crowd] know I was having fun.”
The Mountaineers led by three at halftime, but some timely defensive stops led to key points for the Hoyas, allowing them to create separation early in the second half. From there, Georgetown never looked back.

“I think we did a much better job protecting the paint but then also closing out on their shooters in the second half,” Thompson said.

Now, Georgetown must turn its attention to Florida State. The Seminoles denied the Hoyas another home game and a chance to meet Florida Gulf Coast after defeating the Eagles in their first round game. Florida State needed every minute of regulation to close out a 58-53 victory in a game that wasn’t expected to be close.

Despite earning the top seed in the NIT, Florida State has had a pedestrian 2014 campaign with few notable wins and few embarrassing losses. Like Georgetown, the Seminoles knocked off Virginia Commonwealth early in the year and also snuck out a win over then-No. 22 Massachusetts.

The Seminoles’ starting lineup is striking for its size; sophomore center Boris Bojanovsky clocks in at7 feet 3 inches — a sure matchup problem for junior forward Mikael Hopkins, who comes in at a half-foot shorter. Florida State also boasts another 7-footer in sophomore center Michael Ojo.

Against Florida Gulf Coast, the Seminoles gave significant minutes to only five players and only six players took a shot. Senior forward Okaro White and sophomore guard Aaron Thomas took 60 percent of the team’s total shots. Limiting these two will be key to the Hoyas’ success.

Georgetown solved one of its chief concerns — foul trouble — against West Virginia, committing only 21 fouls compared to 27 for the Mountaineers. If senior forward Nate Lubick — who bounced back with a strong showing after a flat outing against DePaul in the Big East tournament with a strong showing — and Hopkins can play solid defense without fouling, the Hoyas will be in a good position.

Georgetown’s victory Tuesday night was one of its most disciplined and effective 40 minutes of basketball this season. The Hoyas fed of the crowd’s energy — a deafening roar of students and alumni that drowned out the few West Virginia fans — but will face an entirely different environment in Tallahassee. Georgetown struggled on the road this season, finishing only 2-8 away from home.

Perhaps most important to the Hoyas’ win was that Thompson managed to motivate his players in a way that West Virginia could not. In a tournament neither team expected to participate in at the beginning of the season, it was Georgetown that put forth the necessary effort to win. Now it must continue its push against Florida State.

Tipoff is slated for 7 p.m. Monday and will be aired on ESPN.