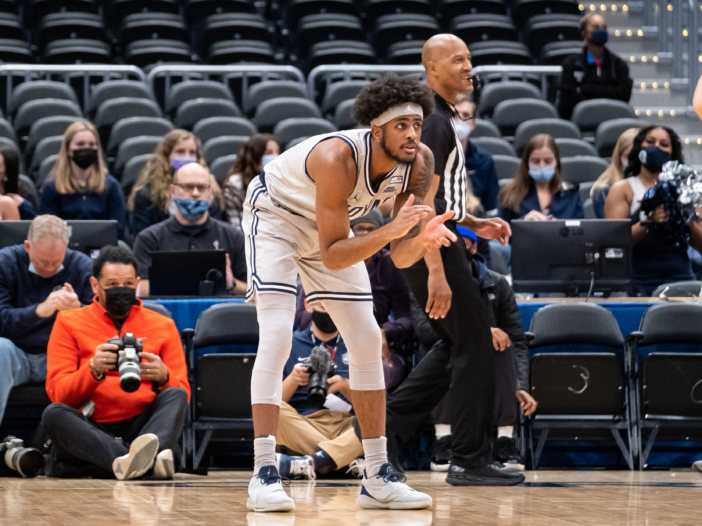 A combination of poor decision making from the Georgetown men’s basketball team and excellent play from St. John’s extended the Hoyas’ losing streak to four games.

The Red Storm’s game plan, designed by reigning Big East Coach of the Year Mike Anderson, was clear from the outset. Anderson’s team forced the Hoyas into rushed decision-making and sloppy passing with a pressing defense.

On the offensive side of the ball, the Red Storm shared the scoring burden early and played the game at their own pace. The scoring threat came from both the perimeter and interior, with six St. John’s players scoring within the first 10 minutes. This was a theme throughout the game as five St. John’s players ended up scoring 10 or more points.

Georgetown initially found joy on the offensive glass. The Hoyas’ rotation — featuring three players at or above seven feet — generated eight offensive rebounds leading to 12 second-chance points in the first half. However, on defense, Georgetown’s larger lineup was unable to rotate quickly enough to cope with the swift movement of St. John’s small ball.

First-year guard and Georgetown’s leading scorer this year Aminu Mohammed was a bright spark with two putback dunks to dampen the noise of the St. John’s fans. Nevertheless, Mohammed’s effort was not enough to salvage a poor first half.

The Hoyas’ fatigue was visible compared to the energized Red Storm, who managed to rotate 10 players into the game and fed off of the crowd’s energy. St. John’s subsequently opened up their biggest lead of the half, 41-26, before a pair of triples from Georgetown graduate guard Kaiden Rice and sophomore guard Dante Harris had the Hoyas headed to the locker room with the score sitting at 32-43.

To keep the battle alive in the second half, Georgetown needed more patience and better shot selection. However, as the Hoyas fell behind, their urgency to claw back into the game ultimately led to hasty decisions, especially in transition. They turned the ball over 21 times — their second highest tally this season.

St. John’s star and leading scorer in the Big East, junior Julian Champagnie, came alive, netting 21 points through the first half and three minutes of the second and ended with 25 on 9-of-20 shooting in a relatively quiet game for him. Georgetown’s lack of defensive awareness enhanced Champagnie’s seemingly effortless scoring by leaving him wide open twice in the first half.

Midway through the second half, things looked brighter for the Hoyas. Georgetown exposed holes in the Red Storm’s press on occasion and found some open looks on the perimeter for its guards. Rice shook off his poor first-half shooting and buried three 3-pointers in the second, finishing the night with 19 points.

The Hoyas enjoyed a 15-7 run which brought them to 64-72 with seven minutes to go. Unfortunately, a St. John’s timeout combined with a right leg injury to the floor-general Harris slowed all momentum the Hoyas had generated.

The crowd stirred as Georgetown’s offense dried up, failing to beat their men one-on-one and missing from outside. St. John’s regained control of the game and slowed the pace almost to a halt, putting up shots with a few seconds left on the shot clock.

This stretch embodied Georgetown’s performance in this game as a whole, as the team shot 39.3% from the field and 34.6% from beyond the arc, both below their season averages of 42% and 38.1%, respectively.

The Red Storm bested the Hoyas from tip-off to the final buzzer, with their high-tempo style suffocating the Hoyas, who were without Head Coach Patrick Ewing (CAS ’85) for the second game running because of DC Department of Health guidelines. Georgetown never led in the game and eventually lost 69-88.