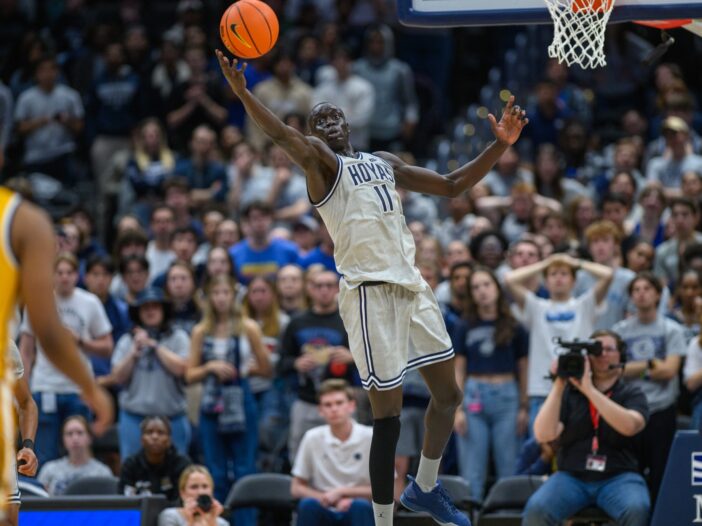 Following a historically bad season in 2021, Georgetown men’s basketball Head Coach Patrick Ewing (CAS ’85) is looking to rebound in his sixth year with the program. After an electrifying win against Syracuse last December, the Hoyas won just one more game before closing out the season with a 21-game losing streak.

Ewing said the team has made internal changes as a result of the atrocious year.

“When you don’t accomplish the things that you set out for, changes have to be made,” Ewing said at the preseason media day. “Changes were made both on my staff and also with the players.”

Indeed, the personnel on the court saw major overturns, as ten players from last year’s roster will not be returning for the 2022-23 season.

From the bench, Tyler Beard, Timothy Ighoefe, Jalin Billingsley and Kobe Clark also transferred to other programs. Malcolm Wilson is now a student manager and Chuma Azinge is no longer with the team.

Along with attracting top coaching talent, the Hoyas also put together a solid transfer class to turn things around this season. The No. 4 ranked transfer class is headlined by sophomore guard Brandon Murray, who earned first team All-Freshman honors in the SEC last season at LSU. Another transfer is familiar to many Georgetown fans, as Maryland senior center Qudus Wahab will return to the Hilltop after transferring out following the Hoyas’ Big East Tournament Championship in 2021.

Ewing offered high praise about his star center during that magical run.

“By the time he leaves here, whenever that is, hopefully in two years, he’s gonna be the best big in the country,” Ewing said after Georgetown beat Marquette University in the first round of the tournament.

Along with the touted transfer class, the Hoyas also brought in two first-years: guard Denver Anglin and forward D’Ante Bass.

Among returning members — few as they may be –– expectations are higher for sophomore guard Jordan Riley after he missed most of last season with a shoulder injury. Junior guard Dante Harris is currently not with the team for personal reasons but will certainly still have a role whenever he returns. Although Harris had an outstanding Big East Tournament run in 2021, he will likely battle Primo Spears for the starting point guard job this season thanks to a down year in 2022.

And then there’s sophomore center Ryan Mutombo, who will come off the bench behind Wahab. Mutombo showed flashes of promise in his first year. There’s also upside junior guard Wayne Bristol Jr., who has been unable to play due to injury and NCAA transfer rules following his standout first year at Howard in the 2019-20 season. Junior forward/center Victor Muresan rounds out the Hoyas’ 2022-23 roster.
Although the schedule features important non-conference games, the Big East will be Georgetown’s biggest problem. The Hoyas will have to be significantly better than last season to make some noise in the conference, which might be a tall task considering the almost brand new roster. Even so, all signs are pointing up from last year, when the Hoyas had their worst season since 1972. If new faces like Murray can gel with familiar ones like Harris and Wahab, there might finally be hope on the Hilltop this season.