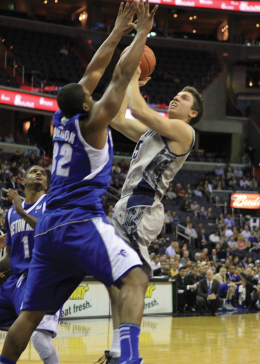 Georgetown’s 74-52 thrashing of Seton Hall Wednesday night gave fans what they often clamor for — an extended look at junior guard John Caprio, who checked into the game with over four minutes to play.

Four minutes to play in the first half, that is.

Caprio, whose solid play early in the game elicited chants of his name from the student section, led the Hoyas with six rebounds and chipped in four points and two assists.

“Coach always tells me to be ready to contribute, so that’s what I tried to do today,” Caprio said. “I hope I was pretty good.”

He was certainly good enough to earn 12 minutes of playing time, almost matching his season’s minute total in just one game.

Georgetown got off to a fast start Wednesday, posting 20 points in the first eight minutes, but a characteristic scoring drought led to just three Hoya points in the following eight. With sophomore forward Otto Porter Jr. on the bench due to foul trouble, Seton Hall seized their opportunity to narrow the gap, going on a 12-3 run to pull within seven.

But the Pirates would get no closer. In typical fashion, Georgetown’s defense was absolutely suffocating, holding Seton Hall to 22 points in the first half — including just four points in the first eight minutes — and forcing 25 turnovers in the game.

“They’re probably as good of a defensive team as there is in the country,” Willard said of the Blue and Gray. “They’re physical, they’re solid [and] there are no gimmicks to them.”

Despite offensive ineffectiveness for a stretch in the first half, Georgetown maintained its composure and put up 42 points after the break,  its largest total in any half since Dec. 15 against Western Carolina.

Both Lubick and Porter Jr. were essential to the motion of the offense, which improved considerably since a 53-point showing against then-No. 5 Louisville, even though the Pirates mixed up their defensive looks considerably throughout the game.

“Seton Hall went back and forth between their match-up [zone] and their straight man, but I thought for the most part offensively our guys did a good job of just moving,” Thompson III said. “We weren’t stagnant like we were the other day against Louisville. There was more motion.”

Porter Jr. contributed to the offensive outburst, leading all players with 20 points in just 23 minutes of playing time. Freshman guard D’Vauntes Smith-Rivera, while appearing to be comfortable in the offense, struggled with his shot today, finishing just 3-of-9 from the field; his improved defense, however, led to three steals, and he matched Caprio’s rebounding performance with six boards of his own.

Despite increased success offensively, Thompson III still was not satisfied with his team’s output: His opening statement was simply, “Absolutely, we need to work on our free throws. We may even do that tonight.”

To be sure, 56 percent from the charity stripe is a sign of wasted points, but the Hoyas did a good job of just getting to the line against Seton Hall — something the team has struggled with in recent games.

Still, the most noteworthy trend of late is Thompson III’s implementation of unusual lineups to provide depth to a team that desperately lacked it early in the season. Against Louisville, redshirt sophomore Aaron Bowen’s athletic tip-in provided the winning points, and the forward has provided crucial minutes in the last few contests.

Even freshman guard David Allen got in on the fun Wednesday, contributing four points in just over one minute of action. His three-pointer with 25 seconds left to play brought Verizon Center to its feet and prompted a compliment from Willard.

But the standout of the game was Caprio, whose contributions — particularly his solid work on the glass — earned high praise from his coach.

“I probably should have been playing [Caprio] more. Just in terms of understanding how to play basketball, [Caprio is] one of our better guys,” Thompson III said. “And as you saw tonight, you can see he’s one of our better rebounders.”

When asked if Caprio’s performance will translate to more minutes in the future, Thompson III simply replied, “We’ll see.”