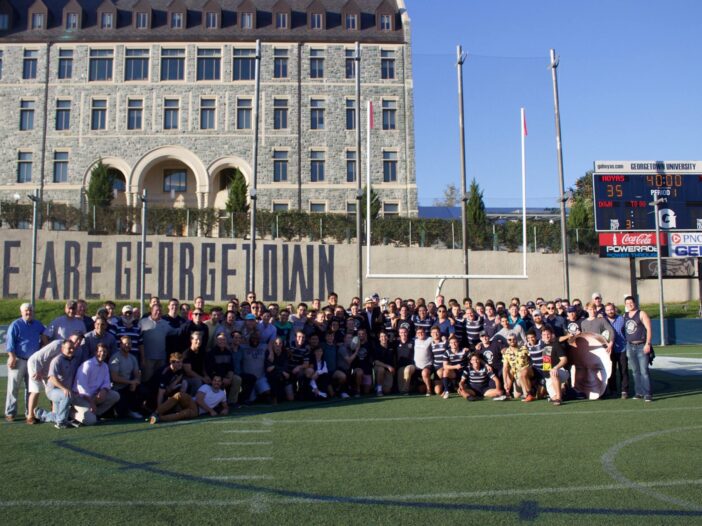 The Georgetown men’s club rugby team continued its undefeated start with a 44-0 win against Towson to kick off Parents’ Weekend.

The Oct. 15 game began at 8 p.m., giving the Hoyas a chance to showcase their talents on Cooper Field under the Saturday night lights. The Hoyas were looking to earn their second straight victory against the Tigers after defeating Towson 34-12 on Sept. 24.

After tweaking its offensive personnel from the previous match against Towson, Georgetown was able to turn out an even more dominant performance, keeping the Tigers scoreless and notching its third shutout of the season.

Captain Mark Kearney said the team has been playing well so far this season, despite issues with practice spaces. “So far, this season has been going pretty well on the field. The team is playing exceptionally well and showing great depth as younger players have been developing into really solid players,” Kearney told The Hoya in a postgame interview. “We are currently ranked No. 3 in the country and hope to continue our success through the playoffs.”

From the opening whistle, the Hoyas controlled the offensive tempo, keeping possession deep into Tiger territory with little spillage into the Hoyas’ end. To start off the scoring, Kearney, a senior, found his way into the try zone for his first of two tries in the half, eventually adding another in the second half.

Despite the impressive offensive performance and five individual try scorers, Georgetown’s stingy defense was the story of the game. Man of the Match, senior number 8 Braedan Mahoney, was a key part of this effort, preventing the Tigers from pouncing into the try-zone.

Along with his act as a stalwart defender, Mahoney punched in the second try of the game, along with a kick from senior scrum-half Charlie Chapman, to push the score to 12-0, before Kearney and Chapman made it 19-0 by the end of the half.

First-year inside center Andrew Maloney was able to find the try-zone early in the second half as the Hoyas continued to keep Towson at bay. The defensive unit was able to stifle any offensive move from Towson, allowing Georgetown to keep its relentless attack going and add four more tries to bring the final score to 44-0.

Although a few players stood out statistically, Kearney said the win was a team effort.

“Against Towson this past weekend, the lads put on a defensive clinic and remained tactically incredibly sound as we put up eight tries and shut them out,” Kearney said. “Some standout players were Braeden Mahoney, Nick Frayter, Andrew Maloney, Quinn Zebrowski and Noah Thurm.”

Despite trouble with conversions and the prospect of a tough upcoming schedule, Kearney said he remains hopeful for the rest of the season.

“Looking at playoffs, we will obviously face some difficult opponents like Bucknell and Villanova, but I have full confidence in this team’s ability to push through and make it to the national tournament and hopefully push all the way to Houston,” Kearney said.

Despite not playing the Towson Tigers, the Men’s Rugby B-side put in a tough effort as well, losing 5-7 to the Howard Bison and George Mason Patriots. By focusing on building their alternate squads, the Hoyas are building a bright future as well as depth for the rest of the season.

The Hoyas look ahead to their bout on Saturday, Oct. 22, as they make their way to Emmitsburg, Md., to face off against Mount St. Mary’s for their second match against the Mountaineers this season. They look to build off their previous 69-15 win, and grow their lead within the MARC Potomac division.