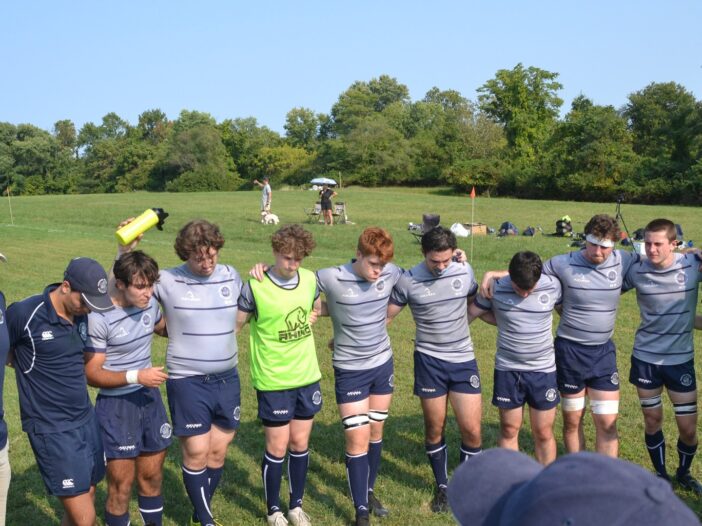 The Georgetown men’s club rugby team kicked off its regular season with a resounding 92-0 win over the University of Maryland, Baltimore County (UMBC) Retrievers. On a beautiful sunny day at Kenilworth Field in Northwest Washington, D.C., the Hoyas hoped to build off of last season’s successful run to the Division II National Collegiate Rugby Championships in May.

After a successful preseason, the hard work seemed to pay off as the team looked like a well-oiled machine during the Sept. 17 game. From the opening drop kick, the Retrievers proved to be no match for the high-powered Hoyas. Cheered on by a strong contingent of Georgetown fans, the 15-man lineup took the pitch and did not look back.

The barrage of scoring began almost immediately with senior club president and second row Jack Kelly, who found his way into the try zone and touched it down to take a quick 5-0 lead. The conversion was completed as well, pushing the score to 7-0. For his exceptional play and composed leadership, Kelly was named Man of the Match.

Despite a spectacular individual performance, Kelly said it was a team effort that allowed the Hoyas to get the win.

“I’m very proud of the leadership I saw from every player on the field,” Kelly said in a postgame interview with The Hoya. “I think we are on track to finish the journey we started last year, winning a national championship.”

The scoring party continued with sophomore outside center Quinn Zebrowski, the Hoyas’ leading scorer of the day. He was also able to tag along another try to make it 40-0 later in the first half and pushed the lead from 71 to 76. Junior fullback Isaac Greenspan hammered it in as the half ticked to zero. Although the subsequent conversion was missed, the Hoyas took a resounding 47-0 lead into the locker room at halftime.

Several Georgetown players etched their names on the scoring sheet as sophomore right wing Anthony Altobelli, senior hooker Jimmy FitzPatrick, graduate outside center Christian DeGroot and sophomore inside center Gavin Brady each notched 2 tries. FitzPatrick and Altobelli scored 3 straight tries to start the second half to extend the Hoyas advantage to 66-0. Altobelli, who produced his first 2 career tries in the game, seems to be a positive addition for the Hoyas.

Senior captain and fly-half Mark Kearney anchored his team with both his leadership and stellar offensive play, producing 2 tries and 3 conversions.

Kearney said he was particularly impressed by how some of the newcomers played in their A-side debut.

“We played well today to kick our regular season off with a big win. I was happy with the way all the lads stepped up, especially those getting their first minutes on the A-side,” Kearney said in a postgame interview with The Hoya.

Despite its lopsided victory in the first game, the men’s club rugby team is determined to stay focused and not get complacent. With eight different players reaching the try zone and over 20 different players earning significant minutes on the field, the win was a consummate team effort.

Kearney said the upcoming games will be more of a challenge but still maintained that the Hoyas must focus on the present.

“Looking forward, the season should get a bit tougher but we’re going to hit the training pitch hard this week in order to get ready for a big match against Towson. This team takes everything one week at a time. If we lose focus on the here and now, we could jeopardize our season,” Kearney said.