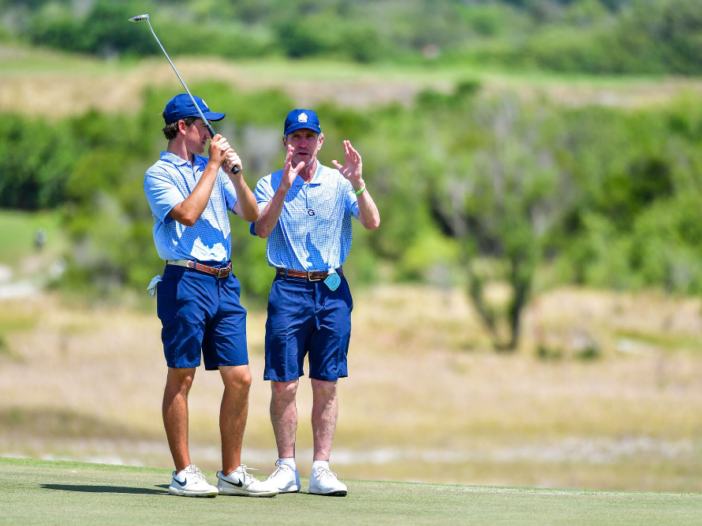 Looking to improve on its sixth-place finish in 2019, the Georgetown men’s golf team headed to Bowling Green, Fla., to compete in the 2021 Big East championships, held on the par-72 Blue Course at Streamsong Resort from Monday to Wednesday. After a challenging season with disappointing results, the Hoyas finished in ninth place out of the nine teams competing.

Although the Hoyas have had previous success at the Big East championships, winning the title four times in 1998, 2010, 2016 and 2018, they came into the tournament with a disappointing set of results this season. Most recently, the Hoyas finished 14th at the Rutherford Intercollegiate Invitational at Penn State, which took place April 17 to 18. Georgetown’s best result of the season was a seventh-place finish out of 13 competitors at the Rolling Green Invitational, hosted by the U.S. Naval Academy in Springfield, Pa., on April 3.

Over the three days of competition, the Hoyas recorded a 54-hole total of 924 to finish in last place, 18 strokes behind the Creighton Bluejays, who claimed eighth place. The UConn Huskies clinched the Big East title with a 54-hole total of 869, earning an automatic bid to the NCAA tournament that will be held May 28 in Scottsdale, Ariz.

Barnes was Georgetown’s third-best finisher, who shot 234 over the three days to tie for 33rd place. Rogers and Rotermund finished 35th and 38th, respectively, shooting 236 and 274.

Despite the final results, the Hoyas can take away many positive notes from their performance, as they showed resilience and development over the course of the three-day tournament. Georgetown finished the first round of competition with a score of 314, placing the team well behind the competition and 12 strokes behind eighth-placed DePaul, which had shot 302. However, the Hoyas continued to improve with each round, shooting 311 overall during the second round and 299 during the third.

O’Neill and Rotermund showed considerable individual improvement with each round. O’Neill rounded out the first day with 80 shots but improved to 76 in the second and 71 in the third round, putting him just three shots behind UConn’s Jimmy Paradise, who shot 68 to produce the best score of the third day. Rotermund shot 95 on the first day, but he managed to cut his total down to 93 on the second day, and eventually 86 on the third day.

“The Big East Championship culminates our season and is an event we prepare for all year,” said Head Coach Tommy Hunter in a phone interview with The Hoya. “Although this year has been very challenging, we need to focus on the task at hand, which is to compete as hard as we can over 54 holes.”

Although the tournament marked the end of the Hoyas’ 2021 season, the team can look forward to further improvements heading into the 2022 season.

“It has been a tough year for sure, but we are grateful to be out here together representing Georgetown,” said Barnes in a phone interview with The Hoya.

Although they finished last and did not perform as well as they wanted, the team was proud of their efforts and the hard work they put into this unprecedented season. As a senior, Barnes was grateful for the opportunity to finish his athletic career with his team.

“The break from competing really put it in perspective for me,” said Barnes. “At the end of the day, whether you play well or poorly, it is just nice to be out there doing what I love.”