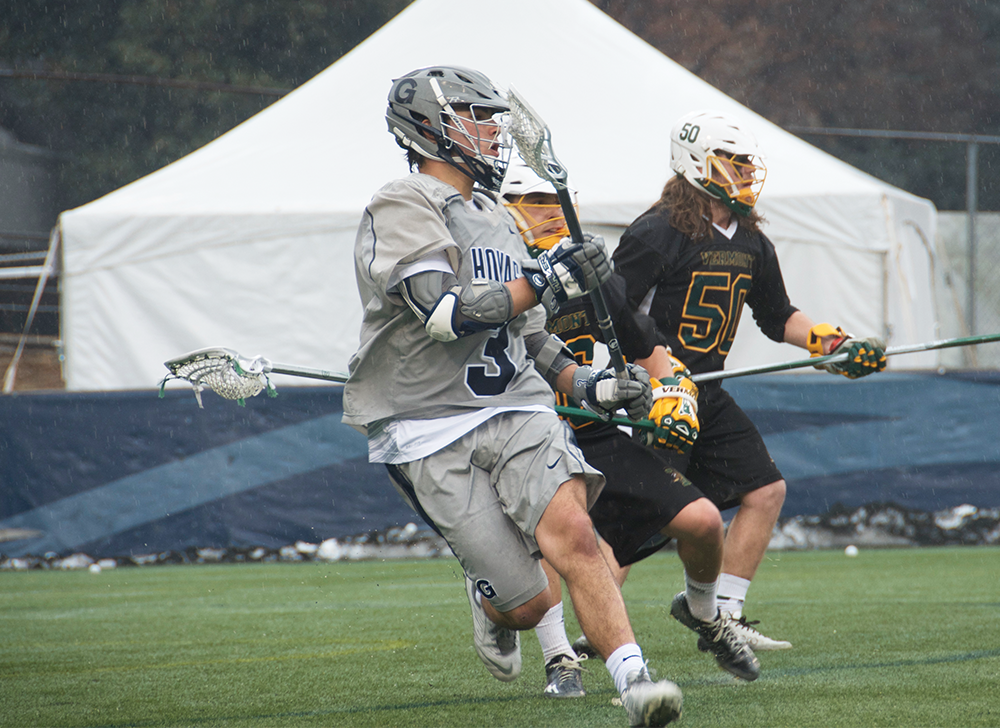 “I thought we played hard, but as what happens in the beginning of the season [is that] you practice against yourself a lot, and some of the teams might do something that you’re not used to,” Head Coach Kevin Warne said.

Georgetown is still seeking the right player rotation and personnel changes to take the faceoff, but in the meantime, a team effort is the best approach to finding success at the X, according to Warne.

In the second period, Georgetown’s freshmen displayed the offensive power of its recruiting class on attack. Freshman attack Daniel Bucaro finally got the Hoyas on the board when he scored at 12:26 of the second quarter for the first goal of his Georgetown career. Freshman attack Chris Donovan followed with his own first collegiate goal, making the game 5-2 with nine minutes left in the first half.

“I thought they were really good. I think they stayed within themselves, [and] they didn’t try to do too much — they just did their jobs. They’re pretty talented, and they were able to create their own shots,” Warne said.

The Hoyas opened up the second half strongly, scoring two goals in the first three minutes of the third quarter, including the first of junior midfielder Peter Conley’s two goals. Bucaro scored his second goal of the game at 12:41 of the third quarter, shrinking Notre Dame’s lead to 7-5. The Fighting Irish responded with two quick goals, both assisted by star senior attack Matt Kavanagh.

Notre Dame added three more goals in the fourth quarter while Georgetown only scored one. Bucaro assisted on sophomore attack Stephen Quinzi’s goal to add another point to his impressive debut.

Despite the five-goal loss, the Hoyas showed their capability to compete with the top team in the nation.

“I thought that our guys competed hard for 60 minutes, and sometimes that’s tough if you go down a few goals, but I thought our guys kept fighting,” Warne said.

However, Warne said there are also several things the team needs to build on from its first performance in preparing for the games ahead.

Georgetown’s next game is this Saturday when it travels to Maryland to play No. 14 Towson (2-0).