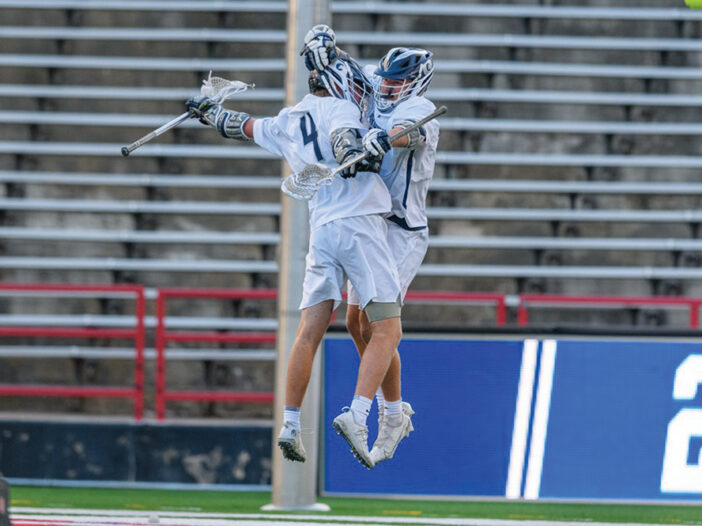 The No. 5 Georgetown men’s lacrosse team cruised to a resounding 18-8 victory over Syracuse on May 15, advancing to the NCAA Tournament quarterfinals for the first time since 2007.

Despite disappointing first-round postseason losses in 2018 and 2019, the Hoyas’ victory against Syracuse cemented their status as strong championship contenders. With the victory, Georgetown tied the program’s record of 13 wins in a single season, achieved in 1999, 2018 and 2019.

The Hoyas (13-2, 9-1 Big East) took an early lead in the first minute off a goal from junior midfielder Declan McDermott, quickly setting the tone for the rest of the game as the Orange (7-6, 2-4 ACC) struggled to respond to their offensive onslaught.

McDermott and graduate attacker Jake Carraway led the Hoyas’ goal-scoring efforts with five goals each, matching the third-most for the Hoyas in an NCAA tournament contest. First-year midfielder Dylan Hess was not far behind, finding the back of the net four times to tie his career high.

The Hoyas finished a close first quarter up 3-2. An effort by the whole team saw Georgetown start the second quarter with five unanswered goals from graduate attacker Nicky Petkevich, sophomore midfielder Graham Bundy Jr., McDermott, Carraway and Hess to build a 8-2 lead over Syracuse, which struggled to close the gap for the rest of the game.

The Hoyas’ offensive efforts were relentless, with the team taking 43 shots overall, 33 of which were shots on goal. Syracuse goalkeeper Drake Porter attempted to weather the storm, making 15 successful saves, but Georgetown’s offense proved to be too strong.

Georgetown’s offensive strength was reinforced by a display of defensive prowess, backed up by a stellar performance by senior goalkeeper Owen McElroy. The Hoyas limited the Orange to just 18 shots on goal throughout the entire game, 10 of which were saved by McElroy in his 10th double-digit save performance this season. Georgetown’s defense was strongest in the third quarter, when they achieved a complete shutout.

Down 13-4 in the beginning of the fourth quarter, the Orange came out firing with a three-goal run with two consecutive goals from midfielder Jamie Trimboli and a third from forward Owen Seebold. However, this surge fell short as Georgetown regained momentum to win the fourth quarter 5-4, bringing the final score to 18-8.

Syracuse’s frustration showed as the team accumulated six penalties for unnecessary roughness, unsportsmanlike conduct and slashing in the final 10 minutes of the game, becoming physical and aggressive. Overall, the Orange committed 11 penalties, in comparison to Georgetown’s two.

Despite their resounding victory over Syracuse, The Hoyas fell 14-3 to No. 4 Virginia (10-4, 2-4 ACC) in the NCAA Tournament Quarterfinals on May 22, after the Cavaliers clinched a 13-11 victory over Bryant on May 16.