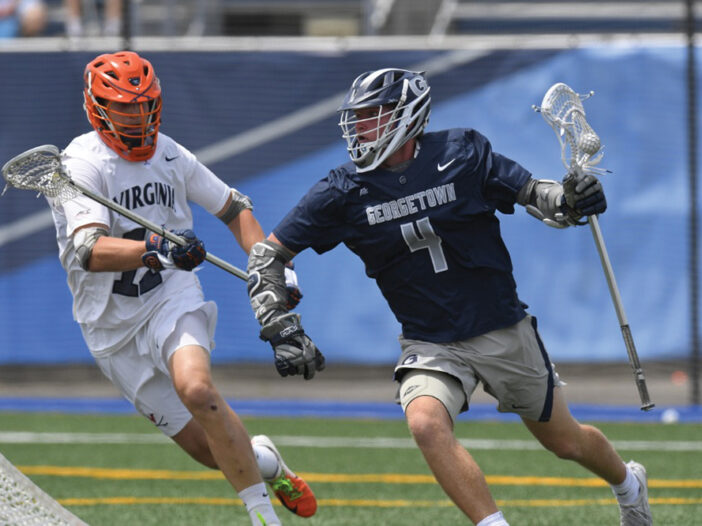 After advancing to the NCAA Tournament quarterfinals for the first time since 2007, Georgetown men’s lacrosse fell to the defending champion, the Virginia Cavaliers, on May 22, ending the season for the Hoyas.

Both teams got off the mark early in the game. The No. 4 Cavaliers (12-4, 2-4 ACC) scored the game’s opening goal in the first two minutes of the first quarter, and the No. 5 Hoyas (13-3, 9-1 Big East) replied less than a minute later, with junior midfielder Declan McDermott notching his 24th goal of the season with 12:30 to go in the first quarter.

McDermott’s score was followed by a barrage of goals from Virginia. The Cavaliers scored nine unanswered goals, including five from attacker Connor Shellenberger, putting Virginia up by a score of 10-1 at halftime.

In the second half, Georgetown scored early off a goal from senior defender Gibson Smith, but Virginia responded with four goals, making any hope of a Georgetown comeback look unlikely. Georgetown junior attacker Dylan Watson scored the lone goal of the fourth quarter to make the final score 14-3.

Georgetown’s faceoff specialist, junior James Reilly, who won 58% of his faceoffs this season, had to leave the game early in the first quarter because of a leg injury. The Hoyas won only five of their 21 faceoffs following Reilly’s injury.

The Cavaliers played with two men down at one point early in the first quarter, but the Hoyas failed to score with their numerical advantage.

Reilly’s injury was a setback for his team, according to Georgetown men’s lacrosse Head Coach Kevin Warne.

“When he gets injured on the opening faceoff and on top of that we don’t score on the man up, I’m just not sure we were mentally ready to handle that,” Warne said in a press conference after the game. “It was a big blow.”

Averaging 13.8 goals per game before Saturday’s contest, Georgetown’s attack registered only three goals, its lowest output of the season. Graduate attacker Jake Carraway, the 2021 Big East Attack Player of the Year, produced an assist but no goals, the only game all season in which Carraway failed to score. Senior goalkeeper Owen McElroy, named to the 2021 Big East First Team, had eight saves but only saved 36.4% of the shots he faced, his second-worst save percentage of the season.

The Hoyas’ run to the quarterfinal continues a general trend of improvement for the team. From 2008 to 2018, the team failed to qualify for the NCAA Tournament and amassed only four winning seasons. Since 2018, however, Georgetown has appeared in the NCAA Tournament every season it was held, and the Hoyas have finished no lower than second in the Big East.

Despite coming up short against Virginia, Carraway said he is proud of what he and his teammates have accomplished in the past few seasons.

“When I got here, Georgetown was in a really bad spot,” Carraway said in the postgame press conference. “Just to get where we’ve gotten now, a quarterfinal, is extremely satisfying. I wouldn’t change these last five years for anything.”