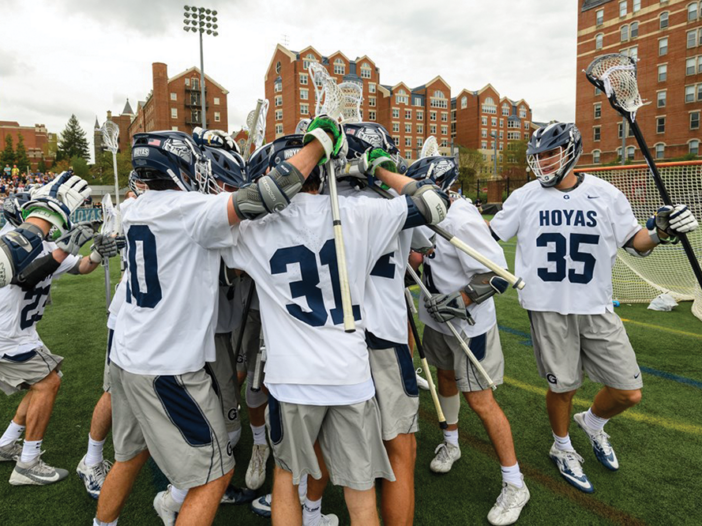 When the COVID-19 pandemic canceled the 2020 NCAA lacrosse season, the Georgetown men’s lacrosse team was on a roll. The Hoyas were off to a 6-0 start, dominating their nonconference opponents and looking to keep winning as they entered Big East play.

Now, almost a year after Georgetown last took the field in a 16-4 win versus Towson, the Hoyas hope to put together another strong season and reach the NCAA tournament for the third straight time.

The Hoyas have enjoyed success in recent years. In both 2018 and 2019, they reached the NCAA Division I Men’s Lacrosse Tournament after failing to make the tournament for 10 straight years. Before then, they enjoyed a victorious era when they earned a spot in the tournament each year from 1997-2007. The team came in second place in the Big East regular-season standings during the past two seasons, and the Hoyas earned an automatic spot in the tournament after winning the Big East Men’s Lacrosse Tournament.

Georgetown has spent much of the last decade in the shadow of its Big East opponent: the University of Denver. Denver has earned bids in the NCAA tournament in each of its five seasons in the conference, including three trips to the Final Four and one national championship. This year, the Hoyas hope to build on their momentum from recent years and look to beat Denver to win the Big East regular-season championship for the first time.

Georgetown opens the season ranked eighth in the United States Intercollegiate Lacrosse Association rankings, the highest ranking in the Big East and two spots above Denver. The Hoyas were ranked ninth in these rankings when the 2020 season was canceled last year. In the Big East preseason coaches’ poll, Georgetown was selected to finish second in the conference’s standings.

To make it back to the NCAA tournament and possibly win a Big East championship, the Hoyas will have to triumph through a grueling 12-game slate against tough Big East foes and just two nonconference matchups. Because of lasting pandemic impacts, the Big East announced a home-and-home round robin for all of its lacrosse teams, hoping to minimize potential scheduling issues and COVID-19 issues. This schedule means the Hoyas will face off against each of their conference rivals twice this season, once at Cooper Field and once on the road. The Big East features six men’s lacrosse teams, so Georgetown will have to battle Denver, Villanova, Providence, St. John’s and Marquette twice.

The Hoyas will start their season against Villanova on the road Feb. 21 before returning home for their home opener against St. John’s a week later on Feb. 27. After cycling through each Big East opponent once, Georgetown will kick off the second half of its season playing Villanova again, this time at Cooper Field on March 27. The Hoyas will round out Big East play April 24 against Providence at home.

The Big East men’s lacrosse tournament will take place May 6-8 in a traditional format. The top four teams from the regular season competition will face off in Providence, with the winners of the two semifinals meeting in the championship to determine who earns an automatic bid into the NCAA tournament.

Georgetown’s schedule also features two matchups against nonconference historic rivals interspersed among Big East play. The Hoyas will battle Mount St. Mary’s in Emmitsburg, Md. on March 2. This game will be the thirty-eighth time the two lacrosse programs have faced off, with Georgetown seeking its fifth rivalry win. After the Hoyas have completed their conference schedule, they will take on Loyola University Maryland on the road in the programs’ forty-third edition of their rivalry, extending the record for the most games the Hoyas have played against any rival. The Hoyas have not had much success against Loyola as of late, having lost 11 of the last 12 meetings, but will look to get back on track in the storied rivalry.

In Head Coach Kevin Warne’s ninth season as Georgetown’s head coach, Georgetown retains much of its 2020 team, with 35 returning players once again taking the field donning the Georgetown logo. Also, 12 new players will serve to round out the team, as Georgetown attempts to reach the tournament once more and contend come May.