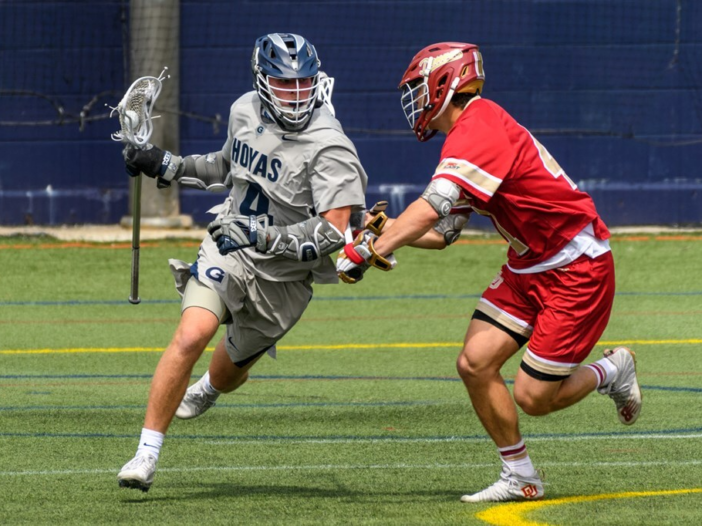 After holding possession throughout overtime, Georgetown men’s lacrosse finally made it onto the scoreboard as sophomore midfielder Graham Bundy Jr. found junior midfielder Declan McDermott open about 15 yards from the cage. McDermott finished off the play, giving the No. 10 Hoyas a thrilling 11-10 overtime upset over No. 6 Denver Pioneers.

The win puts Georgetown (9-1, 8-1 Big East) in first place in the Big East, and it was the Hoyas’ first regular season victory against the Pioneers (8-3, 7-1 Big East) in school history. Georgetown avenged its only loss of the season, which occurred March 16 when it fell to Denver on the road.

Early on in the game, it appeared the Hoyas were in trouble. The Pioneers came out firing, scoring three goals in the first four minutes of play and dominating faceoffs. Georgetown eventually found its defensive rhythm, however, limiting Denver to one goal for the rest of the quarter. The Hoyas also scored two goals of their own before the quarter ended.

The first goal was scored on an impressive coast-to-coast play by junior midfielder Zachary Geddes, taking a pass from senior goalie Owen McElroy all the way down the field and finishing it himself. The Pioneers scored once more after the Hoyas’ second goal, taking a 4-2 lead into the second quarter on the back of their early flourish and dominance in faceoffs, winning five of the seven matchups in the first quarter.

A Georgetown penalty late in the first quarter gave Denver a man advantage to begin the second quarter, which the Pioneers quickly capitalized on, bringing their lead to 5-2. The rest of the quarter was a slog — neither team was able to get much offense going.

The Hoyas scored a highlight reel goal when McElroy almost scored on a coast-to-coast run of his own before dishing off to junior attackman Dylan Watson for the easy finish in front of the net, cutting the lead to 5-3. Watson scored again later during a Georgetown extra man advantage. Then, Denver scored once more before halftime, preserving its two-goal lead.

The third quarter was a back-and-forth affair, with the Hoyas and Pioneers trading goals. Georgetown struck first, but Denver matched every goal until late in the quarter. The key to the Hoyas’ success, especially in the second half, was its faceoff excellence, as junior faceoff specialist James Reilly won 16 of his 24 faceoffs, including six of eight in the third quarter.

Another key to success was McElroy. The Georgetown goalkeeper was stellar all game, racking up 14 saves on 24 Denver shots on goal, three of which came in the third quarter. McElroy also even added two assists. When the third quarter ended, Georgetown had cut the lead to 9-8 on McDermott’s first goal of the game, but the Hoyas were yet to lead in the contest. They had not even tied the score since the Pioneers’ first goal.

In the fourth quarter, Georgetown maintained its momentum from late in the third quarter. First, the Hoyas kept the Pioneers from scoring on a man-advantage opportunity. Then, they scored right after first-year defender Wallace Halpert found Watson near the net to tie the game. That goal was Watson’s fourth of the game, the most for any player on either team.

The rest of the way, both teams’ defenses were locked in. Georgetown’s biggest star, graduate attackman Jake Carraway, was held in check much of the game by Denver’s defense. With just over five minutes to go in regulation, however, he scored an impressive goal while running in the opposite way of the net, giving the Hoyas their first lead of the game at 10-9. Unfortunately, the Pioneers answered back a few minutes later, forcing a tense final two minutes of regulation and, eventually, overtime.

Georgetown dominated the overtime period. It began with another big faceoff win from Reilly, and Denver never got another chance at the ball again. The Hoyas struggled to find good looks but put two shots on target to reset the shot clock. After possessing for almost three minutes straight, Bundy Jr. found McDermott, who scored his second and most important goal of the game to give Georgetown the win.

The Hoyas played a complete game, dominating the faceoff, generating good looks and, most importantly, locking down the Pioneers when it mattered most. Georgetown held Denver to one goal over the final 21 minutes of the game, a very impressive feat considering the Pioneers average over 14 goals per contest. Georgetown will likely see Denver a third time in the Big East championship in May, where the Hoyas have knocked off the Pioneers in consecutive seasons.

The Hoyas still have to get to the championship first, however. That journey continues April 24, as Georgetown will host the Providence Friars at 12:00 p.m. The Hoyas won the first meeting against the Friars, 14-9.