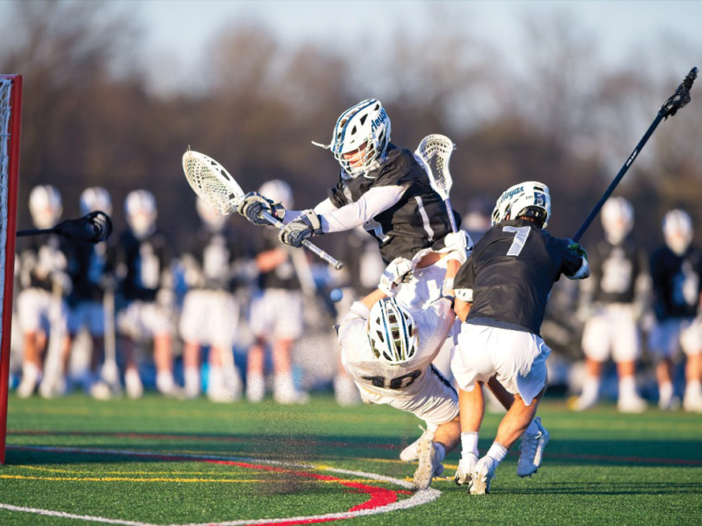 Following a snowstorm that postponed a game in Denver, Colo., from Saturday, March 13, to Tuesday, March 16, the No. 4 Georgetown Hoyas struggled to find an offensive rhythm in a 13-7 loss against the No. 10 Denver Pioneers. This loss broke Georgetown’s four-game win streak to start the season, leaving Denver as the only undefeated team in Big East play.

The Hoyas (4-1, 3-1 Big East) gained a 2-0 lead within the first two minutes of play. This jumpstart was thanks to goals from graduate attacker Jake Carraway and junior midfielder Declan McDermott off of an assist from first-year attacker TJ Haley. Carraway leads the Hoyas in goals scored, with 21 goals so far this season.

Despite a strong start, Georgetown quickly lost control of the matchup, yielding seven consecutive goals to the Pioneers (6-2, 4-0 Big East). The five-goal deficit proved to be too much for the Hoyas to overcome, as they failed to regain the lead for the duration of the contest. This offensive struggle was unexpected, as the Hoyas scored 20 goals in their previous game against Marquette. This contest marks Georgetown’s lowest-scoring performance this season.

Much like their offense, the Hoyas struggled with defense throughout the game. Georgetown’s defensive performance has suffered in the absence of star senior defenseman Gibson Smith due to injury, and its 13 goals allowed matched its previous season high.

The Hoyas outshot Denver 46-39, but the Pioneers got better shots on their possessions, outpacing Georgetown with six more shots on goal. Sophomore midfielder Will Godine contributed to the Hoyas’ defensive efforts, with two caused turnovers and three ground balls.

Denver goalie Jack Thompson put on an electric performance in net, notching a .632 save percentage. For the Hoyas, senior goalie Owen McElroy saved 12 shots against 13 goals allowed, saving 48% of shots on goal. McElroy’s 12 saves mark a season high for the senior.

The Hoyas will travel to Rhode Island on Saturday, March 20, to take on the Providence Friars following their loss to Denver. Georgetown aims to return to its winning ways against a Providence squad that fell to Villanova, a team that Georgetown defeated 16-1 in their matchup earlier this season.