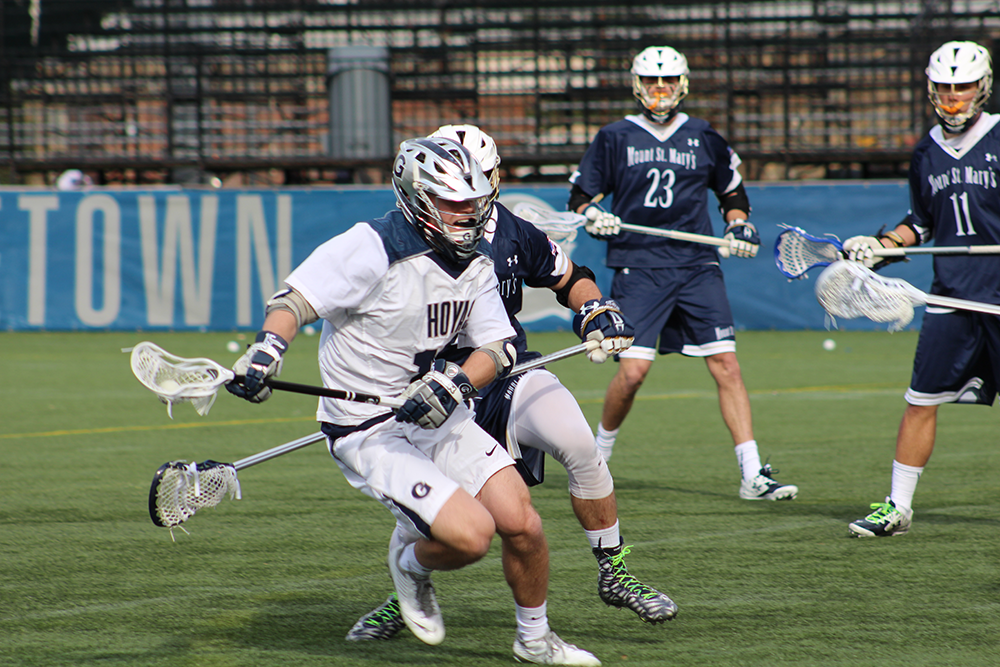 The Georgetown men’s lacrosse team (1-9, 0-2 Big East) will host the Providence Friars (7-3, 1-0 Big East) this Saturday as the team advances in conference play. The Hoyas have yet to earn their first conference win after dropping their first two Big East games en route to a six-game losing streak and are currently in last place in the six-team conference.

Senior midfielder and co-captain Corey Parke said that despite their record, the Hoyas remain confident looking ahead toward the remainder of the season.

“You just have to focus on the process, not the results. We are doing everything we can in practice, keeping it high-tempo and competitive. [We are] working hard to get better every day and not focus[ing] on what’s behind us,” Parke said.

The Providence matchup has big implications for the future of Georgetown’s season. The team is treating this game as a must-win game because it wants to improve its conference ranking and potentially make a postseason appearance.

“We are at the part of the season where everyone knows their role, what they are expected to do and how they are supposed to do it. Now that we’re in a conference game, it’s make or break,” Parke said.

The Hoyas’ main concern this season has been their offensive game. The team’s offense averages just 7.6 goals per game, breaking the double-digits in goals in one of its 10 games. Sophomore midfielder Craig Berge, who finished as the third leading scorer on the team his freshman year, has struggled this season, scoring six goals and no assists.

However, Head Coach Kevin Warne praised Berge, who he said has had to adjust to playing a new position.

“We have a lot of confidence in Craig’s ability. We moved him from midfield to attack to help our production. He’s a smart lacrosse player and has a high lacrosse IQ. He understands where he needs to be to help his teammates one way or another,” Warne said.

“He’s done a really good job of acclimating himself to the college game. He can play multiple positions and he is doing a really good job of understanding what he needs to do to be successful. He’s unbelievably coachable, does all the right things, and wants to be great,” Warne said of Bucaro.

Providence will enter Saturday’s matchup sitting at third place in the conference standings and boasting a four-game win streak. Senior attack Will Mazzone was named the Big East Offensive Player of the Week on Monday for his effort in the Friars’ 15-10 win last week over the St. John’s Red Storm (1-9, 0-1 Big East). Mazzone had eight points, including six goals, to lead Providence past St. John’s. Mazzone leads his team with 44 points — 27 goals and 17 assists.

On the defensive end, freshman goalkeeper Tate Boyce has been an integral part of the Friar’s team. He is currently ranked seventh in the nation in saves per game with 12.1 and eighth for a .571 save percentage. Providence’s aggressive defense leads the Big East in caused turnovers per game with 8.3.
Warne said the Hoyas have to take care of the ball on the offensive side and not waste quality scoring opportunities against Boyce to be successful.

“[The offense has] to be smart. We have to do everything fundamentally sound, whether it’s to communicate, throw good passes or understand what [Providence] is trying to do, and hopefully we can generate shots off of their aggressiveness,” Warne said.

With only four games left on its schedule, the Hoyas’ quest to turn their season around begins this Saturday against the Friars. Opening faceoff is at 3 p.m. at Cooper Field.