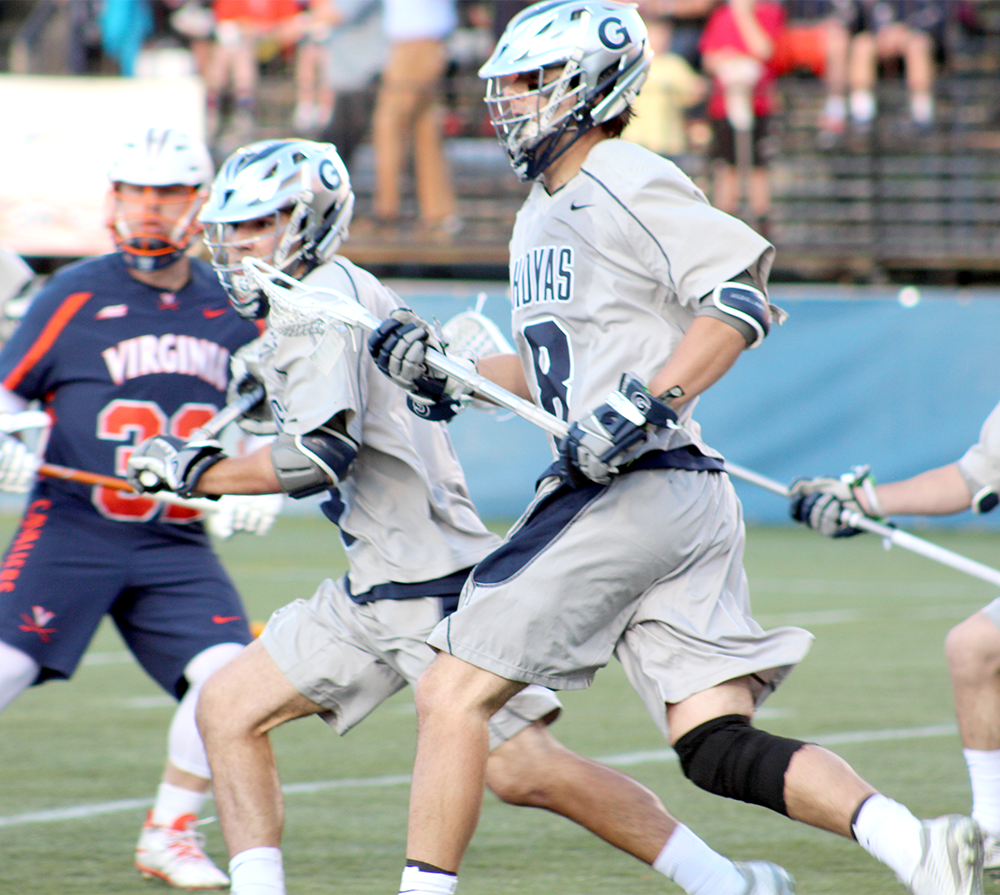 The Georgetown men’s lacrosse team (2-11, 1-3 Big East) fell to the Virginia Cavaliers (7-7, 0-4 ACC) 8-7 on an emotional Senior Night for the Hoyas. The Hoyas celebrated the careers of four gradating players, including graduate student midfielder Joe Bucci, who tied his career high with five goals in his final home game.

Bucci went into the game knowing he wanted to make a mark on his last contest at Cooper Field.

“Ever since I was little, I wanted to play college lacrosse, and I did that. I had a terrific game on national television on Senior Night, and you know that’s all I could’ve done,” Bucci said.

Bucci’s sensational individual effort set the tone for the team the entire night, as the Hoyas did everything in their power to compete with a traditionally powerhouse college lacrosse team.

The game started out as a tight defensive battle, with the first goal scored 13 minutes into the match. Virginia junior midfielder Zed Williams broke the scoreless tie on an unassisted goal. It took the Hoyas about two minutes to respond with a goal of their own; Bucci notched his first goal of the game with 22 seconds left in the first quarter.

The Cavaliers regained the lead shortly after when junior midfielder Michael Howard scored his first collegiate goal with just four seconds remaining in the period.

Bucci added his second goal of the game at 11:21 of the second quarter, but the Cavaliers’ senior attack James Pannell scored less than a minute later. Virginia added two more goals to close out the quarter, including a goal that came off Georgetown’s failed clearing attempt. With one second remaining in the half, Pannell’s second goal of the game gave Virginia a 5-2 lead.

The Hoyas entered the second half with more intensity, playing a more aggressive and defensive game. Sophomore goalie Nick Marrocco stopped all six shots he saw in the third period, and the Hoyas’ offense added two more goals to draw within one.

Georgetown climbed back against Virginia’s tight defense in the fourth quarter. Bucci scored at the 12:44 minute mark to tie the game at five. Following two more Cavalier goals, Bucci capped off his offensively dominant Senior Night with his fifth goal, cutting the Virginia lead to 7-6 with 8:05 left in the game.

The Hoyas controlled the hustle stats in the fourth quarter, winning 10 groundball battles, compared to the Cavaliers’ six. However, Virginia was able to capitalize on its opportunities and extended its lead to 8-6 on a Williams’ goal that came a man-up with 4:06 minutes remaining in the game.

Despite Virginia’s late lead, Georgetown still fought to the final buzzer. Sophomore attack Craig Berge intercepted a clearing attempt by the Cavaliers and scored his 10th goal of the season with five seconds left in the game to cut the lead to one.

In his last game, Bucci said he appreciated the team’s resilience and took it as a welcome sign for the program’s future.

“We’ve been in close games, have just folded at the end, but we put one in with four seconds left to give ourselves a shot,” Bucci said. “That’s sort of who we’ve become, and moving forward, I think this program is going to be in good shape.”

Head Coach Kevin Warne echoed these sentiments and also lauded Bucci’s impact on the program during his five-year collegiate career, especially as a two-year captain.

“Joe Bucci has been a rock, he’s been here for five years, and he really put the team on his back tonight,” Warne said. “[He] said: ‘Hey, this is my night — I’m going to do my part,’ and he was fantastic in a lot of areas. He left a mark tonight, and if we can build on that, we’ll be in good shape.”

Despite the outcome of the game, Warne said he was proud of the effort put forth by his team and looks forward to build on this heading into the tail end of the regular season.

“This is the team I envisioned when we started out on Jan. 14,” Warne said. “They wanted to win; they did everything they could to win, and it just didn’t fall tonight … but I’m really proud of my guys. They played their tails off tonight, and this will put us in playoff mode for next week versus St. John’s (1-12, 0-4 Big East).”