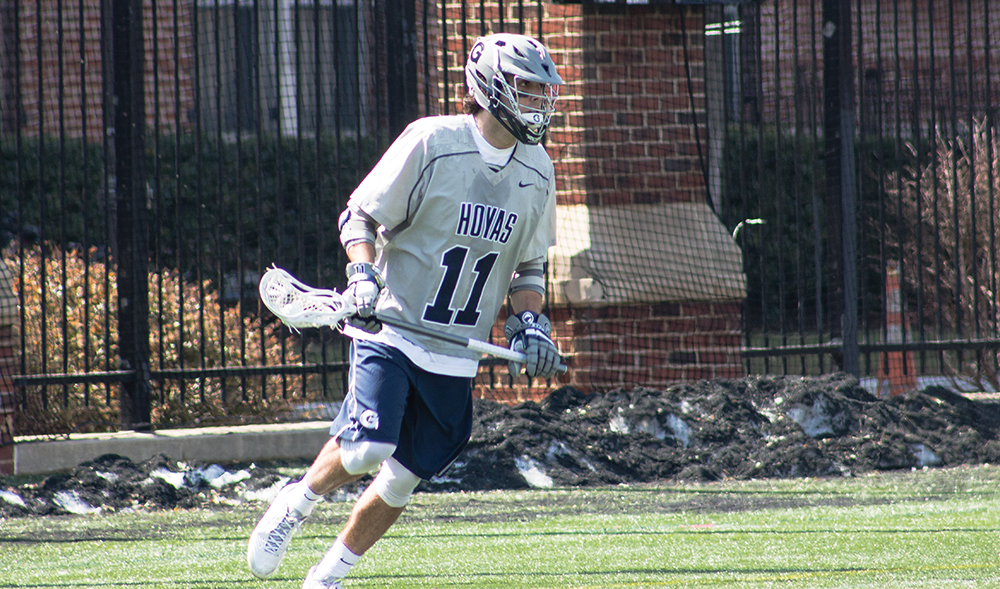 “They’re a really gritty team,” senior captain and defender Nic Mahaney said of Towson. “They’re patient with the ball and they will pepper us with shots. They have a lot of talented players on the team, and [Head] Coach [Shawn] Nadelen has done a lot for that program, and we’re expecting a dogfight on Saturday.”

To properly prepare for the Tigers, Georgetown Head Coach Kevin Warne said he believes the team needs to focus not only on its opponent but also on improving its own game.

“[The] biggest thing [we need to do] is to learn from last week,” Warne said. “Now that we’re in season mode, practice is a bit different, and we have to find balance between focusing on our opponent and making sure we get better at things we need to get better at. We [have] to stick to our fundamentals. That’s been a really big stress point to our coaching staff — telling players to do things the right way.”

Warne concentrated on ground balls this week in practice, an area in which Georgetown struggled against Notre Dame. The Hoyas only came up with 23 ground balls compared to the Fighting Irish’s 35, giving up offensive opportunities in key 50-50 situations.

Towson boasts the number one defense in the nation, only allowing 3.5 goals per game. For the Hoyas to have an opportunity to win their game against the Tigers, they must convert on every ground ball opportunity to wear down the Towson defense.

“[We] focused on getting ground balls, on offense taking care of the ball a lot better and capitalizing on opportunities,” sophomore midfielder Craig Berge said of what the team has been focusing on in preparation for Saturday’s game.

Berge, who was held pointless last week, looks to be more active offensively. The Tewaaraton Foundation named Berge to its Tewaaraton Award Watch List for the 2016 season this week, and though he described this acknowledgment as an honor, he said he recognized that the game comes down to a team effort, especially on the offensive end.

“I wouldn’t have gotten this [recognition] if it wasn’t for the ball movement and the team offense we played [last] year. We had six guys on the field at all times that could score the ball, pass the ball and be in the right spot to make things happen. It’s definitely an honor, but more of a team thing than anything else,” Berge said.

Another area where the Hoyas struggled last week was at the faceoff X, winning only five of 22 faceoffs. Coach Warne praised the Hoyas’ faceoff squad but said believes that the play of the other midfielders on the wings needed to be improved.

“We have been working a lot on our wing play. We noticed that our faceoff guys did a real good job at scrapping, we just need to do a better job on the wings and make it a three-on-three rather than a one-on-one battle,” Warne said.

Towson went to the NCAA tournament last season, losing in the second round to Notre Dame. Towson senior goalkeeper Tyler White remains one of the best goalkeepers in the nation and was named to the All-American second team last season.

On the other end of the field, Towson’s most significant offensive threats are junior attacks Ryan Drenner and Joe Seider, who both have scored four goals so far this season. Georgetown will not only have to get good looks against a top goalie but must also stop an excellent team offense.

“[In order to win] we must match their intensity. Towson is going to come out hot and we [have] to fix everything we’ve been working on, have a good rest of the week at practice, do everything we can to get our minds right and get the win,” Berge said.

According to Mahaney, the Hoyas must move on from their mistakes and focus on the next play, rather than dwell on the past.

“I think we need to fight for every ground ball, every play and have a short memory. … This year we have a great group of guys who understand our position and that we need to take a breath and flush down the last play that just happened,” Mahaney said.

Warne emphasized the importance of fundamental skills as the Hoyas look ahead.

“I think that [focusing on fundamentals] is a good basis for game planning and puts us in a good position to win on Saturday,” Warne said.

Georgetown will face off against Towson on Feb. 27 at 12 p.m. in Towson, Md., at Johnny Unitas Stadium.