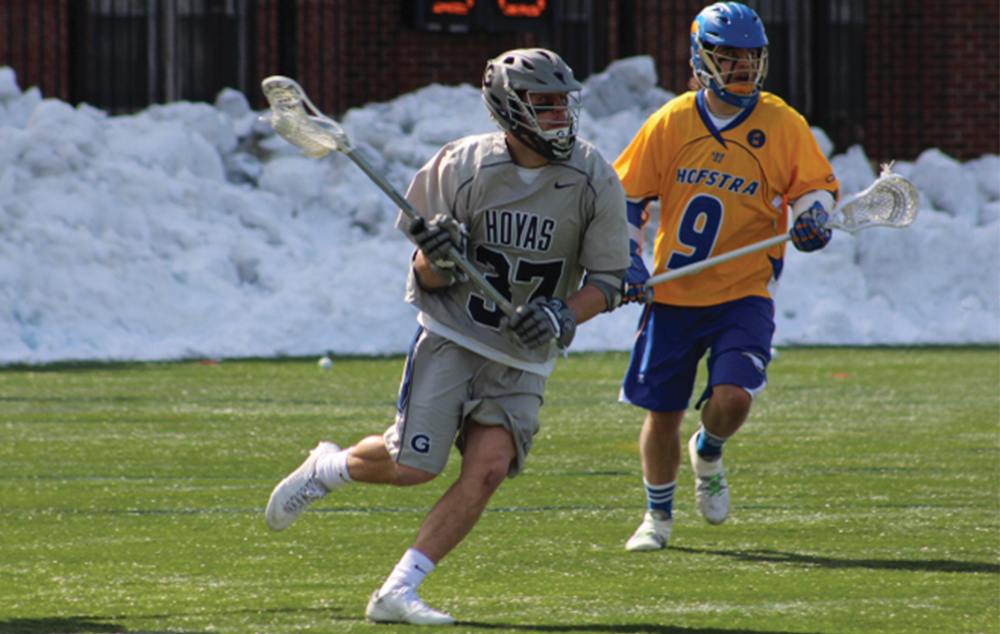 The No. 14 Georgetown men’s lacrosse team will begin its season this Saturday when it takes on No. 1 Notre Dame. The bar is set high this season for Georgetown, after finishing with a 10-6 record last season and losing in the Big East championship game to defending national champion No. 2 Denver.

“I think our guys have learned a lot from last year’s disappointments, and I think we’ve seen a lot of improvements in areas that will help us,” Warne said. “I just like the way we’ve been practicing and our upperclassman leadership.”

Warne has turned to the team’s three captains for this upperclassman leadership. Graduate student midfielder Joe Bucci, senior midfielder Corey Parke and senior defenseman Nic Mahaney were selected by their teammates as this season’s captains. Returning to the team as a graduate student, Bucci was selected as a captain for the second year in a row.

The captains understand the responsibilities ahead for the 2016 season and are ready to step up as leaders on and off the field.

“It’s definitely a great honor,” Parke said. “To have your teammates select you [as captain] is something that you look forward to ever since you start playing lacrosse.”

Warne praised the captains’ ability to embrace the team’s core values and understand what is necessary in order to improve the team.

“I think [Bucci, Mahaney, and Parke] have seen things we need to improve on, the things that have worked well and what to continue to build on those things,” Warne said.

The upperclassmen have stepped up not only to improve their own game, but also to help ease the transition to the college game for the freshman players. Georgetown graduated both of its top two scorers from last season — Bo Stafford and Reilly O’Connor. The two led the team on attack and combined for 56 goals, leaving a clear void in the Hoya offense after graduating.

However, Bucci said that this year’s freshmen have stepped up to fill key offensive roles.

“[Freshmen] Dan Bucaro and Chris Donovan have replaced Bo Stafford and Riley O’Connor as starters in attack and have been doing a great job so far. The upperclassmen have helped them tremendously, and we’re excited to see what they can do this year,” Bucci said.

Sophomore midfielder Craig Berge will look to replicate his impressive freshmen season, which he finished as the team’s third leading scorer with 37 points. Berge became the first Georgetown freshman to earn All-America honors, as he was named an honorable mention for 2015. This year, Inside Lacrosse named him to the 2016 preseason All-America second team.

Warne describes Berge as a player who cares more about winning than individual accolades.

“Craig is one of the most unselfish players that we have. I don’t think he cares if he scores a goal or has any points, he just wants to win,” Warne said.

On the defensive end, sophomore goalkeeper Nick Marrocco returns as the team’s starter in the cage. In his freshman season, Marrocco started all 16 games and sported a .549 save percentage.

The Fighting Irish have made it to the Final Four three of the last four seasons, and have lost to the eventual national champion in each of those three seasons. An experienced team, Notre Dame returns eight starters from last year, including its three starting defenders and goalkeeper. Star senior attack Matt Kavanagh returns for his final season at Notre Dame in fifth place for points in program history. Last season, Georgetown managed to slow Kavanagh on offense, holding him to one goal and two assists.

Rather than preoccupying themselves with the Fighting Irish’s position as the top-ranked team in the nation, the Hoyas are focusing on their own game heading into their season debut.

“We played [Notre Dame] last year so we look at things they do and we do against each other, but mainly [are] focusing on ourselves and making sure we’re ready for game day this Saturday,” Parke said.

Last year, the Hoyas fell in a close and hard-fought 14-12 contest to the Fighting Irish.
Parke noted the frustration in losing close games to top teams.

“We had a lot of close games that ended in losses last year by one or two goals to top-10 teams, so we’re looking to take the next step and finish off those teams this year,” Parke said.

Bucci also stressed the importance of finishing out close games after the team’s failure to do so last season.

“We are not going to talk too much about wins or losses but about effort on the field and finishing close games, which we failed to do last year,” Bucci said.