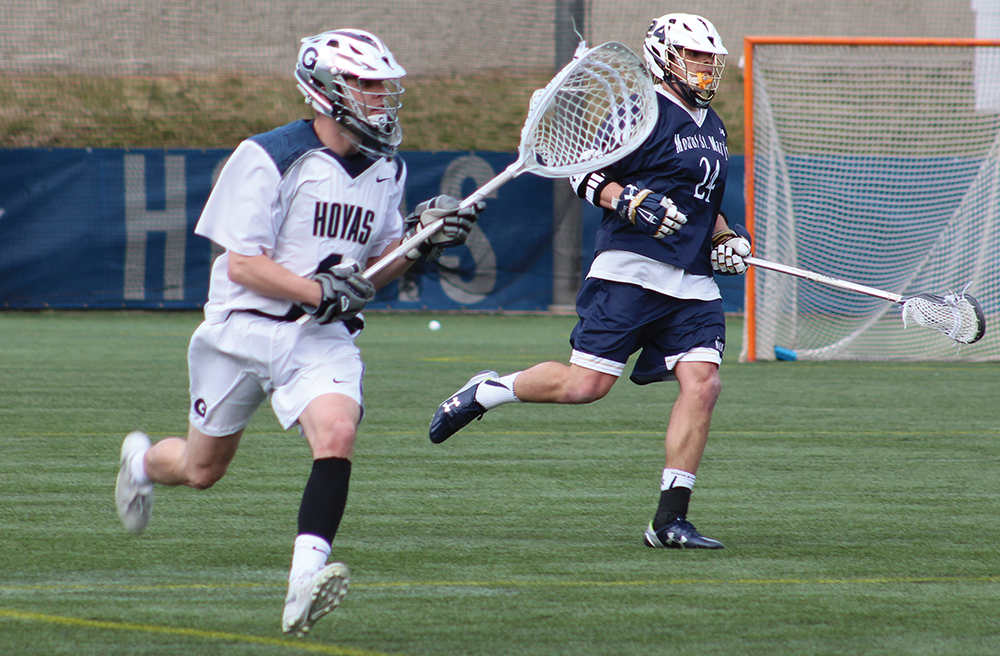 “[Marrocco] bailed us out a couple of times, which all goalies do, so I’m very proud of him, very Nick Marrocco-esque game,” Georgetown Head Coach Kevin Warne said.

Providence senior midfielder Michael Perettine opened the scoring of the game with a shot from a cross-field feed from junior midfielder Kennan Assaraf, giving the Friars an early one-goal lead at 11:45 of the first quarter. It took the Hoyas almost seven minutes to answer back when senior midfielder Corey Parke cut through the Friars’ defense and scored his third goal of the season.

The Hoyas scored two goals in the first three minutes of the second quarter, giving them a 3-1 lead. Perettine scored his second goal of the game with 9:26 remaining in the second quarter, cutting the lead to one. Junior midfielder Eduardo White, who completed his first collegiate career hat trick, responded within a minute. Sophomore attack Craig Berge, who started the season as a midfielder, scored two straight goals from his new position to close out the half, giving the Hoyas a 6-2 lead at halftime.

The coaching staff’s decision to switch the defense to a zone midway through the first quarter bolstered Georgetown’s defensive effort, which held the Providence offense to two goals in the half.

“I think the guys were excited about the game plan. We switched some things up systematically and let Nick do what he does best, see shots from the outside,” Warne said,

“We had a lot of confidence in the zone [coming into the game], so I think seeing a little more outside shots than the past few games [helped me out],” Marrocco said. “Our defense played great in the first time playing zone, and I compliment them a lot for that.”

The confidence boost from the first half transferred to the rest of the game. The Hoyas continued to dominate the possession game and win battles for groundballs. Georgetown won 28 groundballs to Providence’s 21.

“[The hustle and energy] was awesome, even [on] the sideline, everyone was pumped up, and all the little things out there were key,” Marrocco said.

“I think having a lot of energy and keeping the game really simple when you get possession of the ball [helped us win],” Warne said. “I think we rode very well, I thought we scrapped. We picked up a lot of tough ground balls that really haven’t gone our way the past weeks.”

Providence’s offense could not break through the Georgetown defense for the rest of the game, only managing to score three goals in the second half. Georgetown also took advantage of the penalties Providence committed. The Hoyas converted on two of their six extra-man opportunities. In contrast, Georgetown was disciplined throughout the game, only committing one penalty in the form of an offside call.

“[Winning the penalty battle] helped with the tempo, so I think we want to be disciplined, and Providence played really, really hard, so we wanted to make sure we did everything fundamentally sound,” Warne said.

Coming off their first conference win, the Hoyas still recognize the importance of not fixating on the win and continuing to improve.

“There are always adjustments to be made and taken from game to game. But we definitely made a big stride today, and I think moving forward, [we have] just got to keep playing like this and just be happy about the win, but then move on to the next game and realize where we want to be, especially with the Big East tournament in a few weeks,” Marrocco said.

Georgetown continues its conference schedule on the road against Villanova (6-4, 0-2) next Saturday.