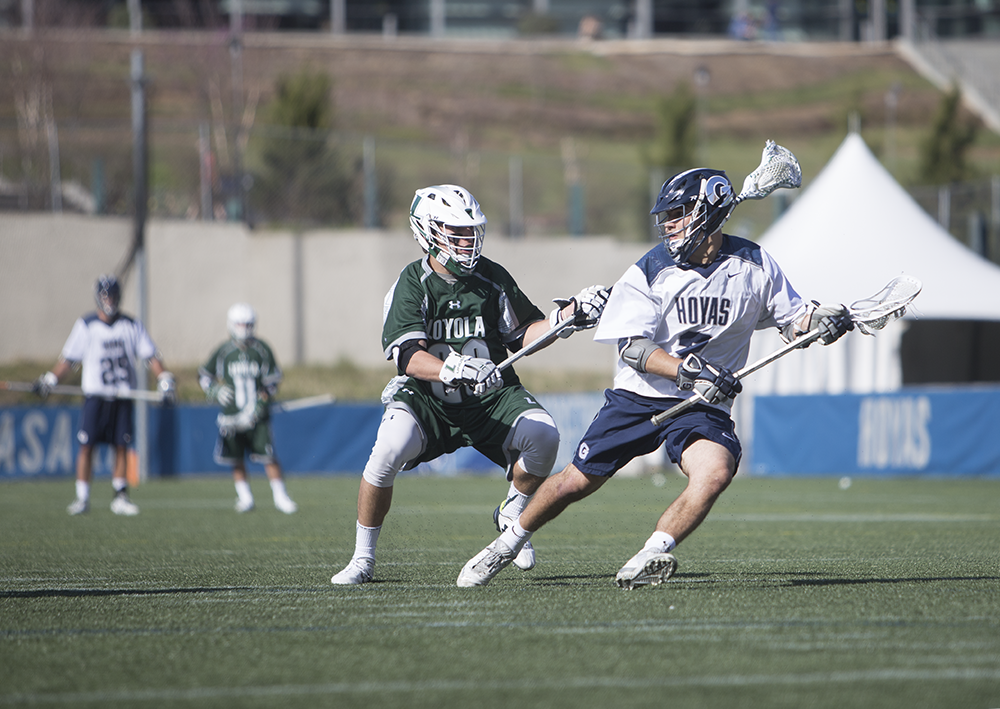 The Wildcats will enter the matchup coming off a one-goal loss to the No. 3 Denver Pioneers (9-1, 2-0 Big East).

Last week, the Hoyas snapped a six-game losing streak in an 8-5 victory over the Friars. Sophomore attack Stephen Quinzi said the win improved the attitude and the confidence of the Hoyas during their week of practice leading up to the matchup against the Wildcats.

“[Last week’s win] gives us a lot of confidence. We had that big win against Hofstra (7-4, 1-1 CAA) early on and then went into a rut and it took a lot to get out of it. But now we’re out of it and are really excited to get going again,” sophomore attack Stephen Quinzi said.

Villanova currently averages the sixth-most goals per game in the NCAA with 13.3 goals. Junior attack Jake Froccaro leads Villanova’s tenacious offense, as his average of 3.4 goals per game tops the entire NCAA.

“They are very, very good offensively. They have one of the top offenses in the country. They have four new faces, so they are very different [from last year]. So we have to understand what the game plan is [to stop them],” Warne said.

Warne is looking for his defense and sophomore goalkeeper Nick Marrocco to stifle the Wildcat offense. Marrocco was awarded the Big East Defensive Player of the Week accolade for the second time this season after his performance in last week’s win over Providence, when he made 14 saves and tied a career-low five goals.

Warne said he expects his defense to make Marrocco’s job easier by controlling where the Villanova offense can take their shots.

“We are going to help him out defensively and have a real good game plan allowing Nick to see shots he wants to see rather than shots he has to see sometimes. We want to make sure to have guys shoot the ball 12 to 13 yards out to allow him to be a more effective goalie,” Warne said.

The Hoyas’ offense will look to take advantage of a Wildcat defense that has been inconsistent in its performance this season. For the past three games, Villanova has had freshman goalkeeper Nick Testa and junior goalkeeper Dan Willis split time between the pipes, with both goalkeepers sporting a save percentage less than .500. Though Villanova’s opponents have made 144 saves to its 95, the offense typically acts as a pressure valve for the defense, outshooting its opponents 484-335 this season.

Quinzi stressed that the Hoyas must focus on the fundamentals on the offensive side of the field.

“[We have been focusing on] a lot of stick work. That’s what we were missing on the offensive end and that’s what we’ve focused on these last couple of games,” Quinzi said.

Warne said he has confidence that if the Hoyas execute on the fundamentals, the outcome of the game will be positive.

“[We have to understand] what we need to accomplish, limit their ability to shoot the ball with their hands free and dictate the tempo on the offensive field. If we do that, I like our chances,” Warne said.

With limited time left to improve its conference record, Quinzi said Georgetown is taking momentum and energy into the Villanova matchup.

“We are all really excited, especially because our season rests on this game. We really want to make the Big East [tournament] and I think we can really turn our season around. We … came out really well against Providence, and I think that same energy is going to be shown against Villanova,” Quinzi said.

Opening faceoff is scheduled for 5 p.m. Saturday at Villanova Stadium.