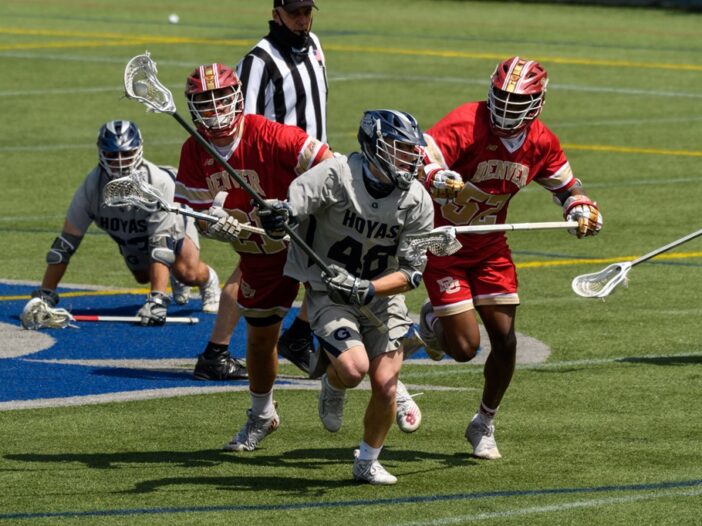 Down 4-2 to No. 17 University of Denver midway through the first quarter, it appeared that Georgetown men’s lacrosse was in for another close, gritty game coming off a narrow 3-goal victory against No. 19 Lehigh.

Georgetown opened its Big East regular season with a win. Following its fifth victory against a top-25 opponent, the Hoyas remain the No. 3 ranked team in the nation.

Georgetown and Denver traded goals to begin the game as the two conference rivals felt each other out in the opening five minutes. While senior faceoff James Reilly scored his fourth goal of the season to give Georgetown an early 2-1 lead with 11:39 remaining in the quarter, the Pioneers quickly stormed back with 3 unanswered goals.

For Denver, attacker JJ Sillstrop scored 2 goals in 40 seconds, putting the Hoyas on their heels down 4-2 with 5:51 remaining in the first quarter.

However, Georgetown senior attacker Dylan Watson quickly used a man-up advantage, scoring his first of a career-high 7 goals to bring the score to 4-3 at the end of the first quarter. The team’s leader in goals, Watson was later honored as the Big East Attack Player of the Week for his impressive individual performance.

Georgetown came out strong at the start of the second, with Watson scoring his second goal of the game nearly three minutes into the quarter to tie the game 4-4. Graduate attacker Connor Morin then scored 2 goals in just over one minute to give the Hoyas a 6-4 lead. Georgetown held on to this lead for the rest of the game.

While the offensive outburst early in the second quarter put the Hoyas ahead, their defense also held strong, stifling the Denver attack and holding the Pioneers to just one goal in the quarter.

While it was an all-around team effort, graduate defender Will Bowen won the Big East Defensive Player of the Week award, forcing two turnovers and holding his matchups scoreless. First-year goalie Michael Scharfenberger was also stout, making 13 saves for the Hoyas.

Denver attacker Richie Connell stopped the bleeding with a man up goal late in the second quarter, but Georgetown still went into halftime up 7-5.

The start of the second half proved to be much the same as the second quarter, with Georgetown’s offense scoring at will while the defense locked down the Pioneers. Georgetown rattled off 6 consecutive goals to start the third quarter, opening up a 13-5 lead.

While the Hoyas dominated in nearly every statistical category, much of the offensive success can be attributed to Georgetown’s flawless execution of extra man opportunities. The Hoyas went 4-4 for the game, including 2-2 in the third quarter, punishing Denver for its defensive penalties.

Georgetown ultimately entered the fourth winning 13-6. The two sides traded goals throughout much of the final quarter, but Denver was unable to mount a significant comeback. Big East Midfielder of the Week, graduate Alex Trippi, scored the final goal of the game with 4:42 remaining, securing a 17-9 victory for Georgetown.

With the victory over Denver, Georgetown opens conference play as the heavy favorite to win the Big East title. The Hoyas will be back in action April 9 at 12:00 p.m. as they take on the Providence Friars (5-5, 0-1 Big East) in Rhode Island.