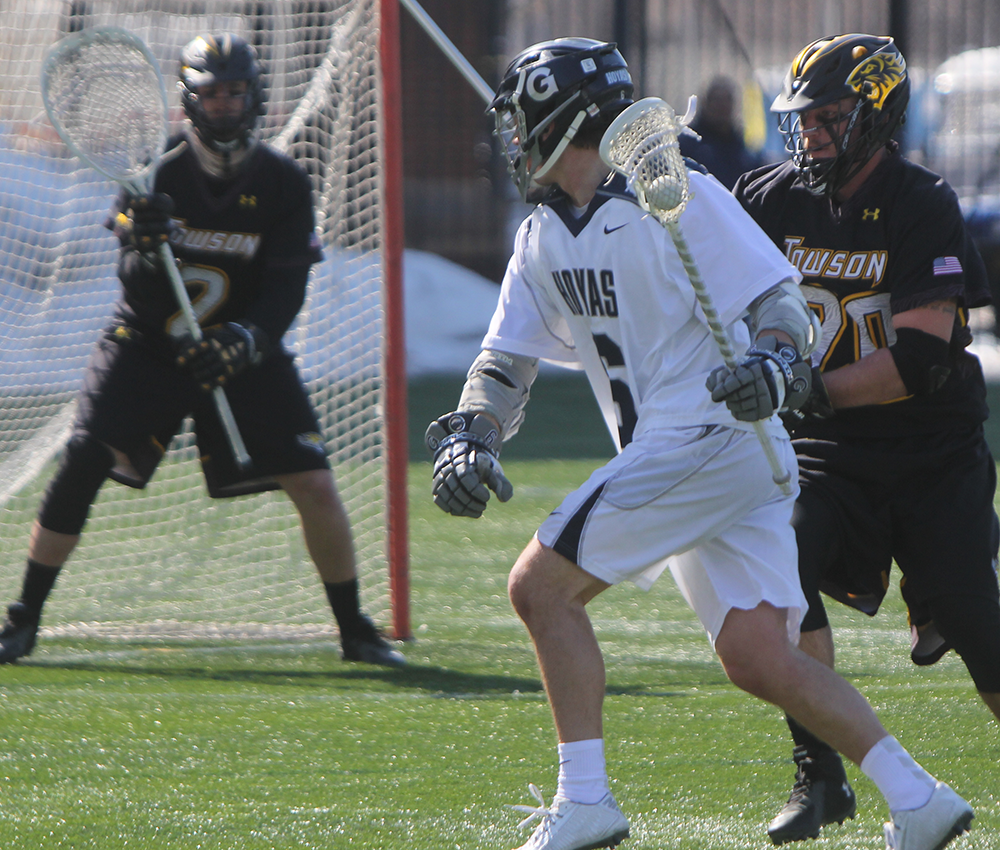 Saturday’s game in Providence, R.I., got off to a relatively slow start as senior midfielder Joe Bucci put Georgetown on the board five minutes into the game, thus scoring the team’s only goal in the first quarter. Providence answered with just under two minutes left in the first period to knot the score at 1-1.

The Hoyas suffered through a 16-minute scoring drought after Bucci’s first goal, but they picked up the pace in following two quarters. The Hoyas tallied three more goals throughout the rest of the first half and notched five more in the third quarter.

Despite the uneven pace of the game, the Hoyas made enough plays to establish a lead that would carry them through another scoring drought that lasted the entire fourth quarter.

“I don’t think we played our best game offensively, but we started to pick it up in the second and third quarters especially and played really well toward the end,” freshman attack Stephen Quinzi said of the effort.

Quinzi had two goals and one assist during the game, and senior attack Bo Stafford led Georgetown’s offense with three goals and two assists.

Given the quick turnaround from the loss on the road against Denver earlier in the week, Head Coach Kevin Warne believes that Georgetown ultimately accomplished the goals that it had going into the game against Providence.

Freshman goalkeeper Nick Marrocco continued to be a bright spot for the Hoyas amidst the challenges of the past week. Though he took the loss in goal against Denver, Marrocco recorded a career-high 22 saves and followed the performance with 18 saves against Providence.

Beyond the impressive statistics that he has already recorded during a breakout rookie season, Marrocco has stepped up to fill an important leadership role for the defense.

“It’s really important for [Marrocco] to direct the defense and to be the comforting voice back there to go, ‘Hey, don’t worry about it — if you make a mistake, I’ll bail you out.’ But at the same time, he commands the defense to make sure we do all the right things to do during our game plan,” Warne said.

Georgetown returns home this weekend for a matchup against conference foe Villanova (5-5, 0-2 Big East). Villanova has struggled during Big East play so far, suffering consecutive losses at the hands of No. 16 Marquette (9-3, 2-1 Big East) and Denver.

Warne emphasized that the Hoyas will need to come out to a quicker start on Saturday than they did against the Friars, given that the Wildcats will likely take the field with a sense of urgency following their losses to two Big East teams.

“[The Wildcats are] going to be really excited to get in here … because their backs are against the wall with two conference losses,” Warne said. “They’re going to come in here looking to knock us off, and we have to make sure we defend the home turf and make sure we take care of what we need to care of on Saturday.”

With its conference schedule winding down in the next few weeks, Georgetown is keeping its goals simple.

“Some coaches try to over-coach in the last month of the season, but our guys have been have been full-time lacrosse guys for eight months now, so there’s no new offense or ride or clear that we’re seeing,” Warne said. “We just have to get better at the fundamentals and almost do less and keep it really simple.”

Quinzi says that the offense shares this mentality.

“We’re all just trying to do what we’re taught and doing the right things instead of making a big play and just playing as a unit,” Quinzi said. “We really don’t care who gets the credit, so we’re just trying to win.”

Opening faceoff is scheduled for 3 p.m. at the MultiSport Facility.