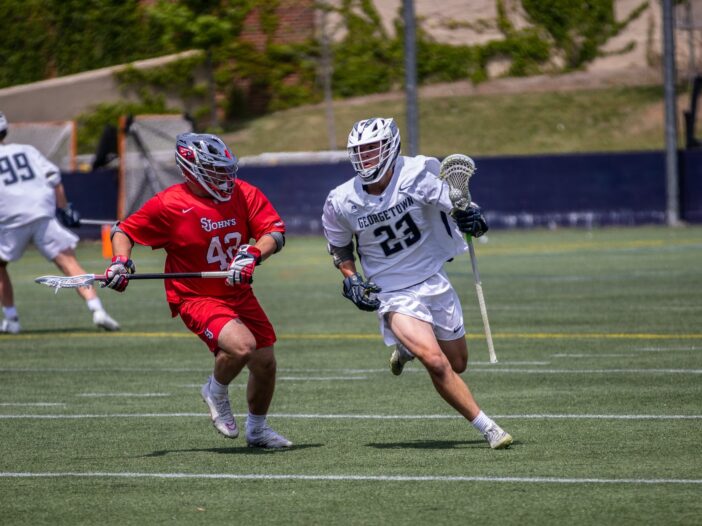 Georgetown men’s lacrosse cruised to an early 6-0 lead and never looked back, winning 23-6 over the Big East rival St. John’s Red Storm on April 23. Senior attacker Dylan Watson turned in another dominant performance with four goals and an assist, helping the Hoyas break a program record for scoring in conference play with their 23 goals.

No. 2 Georgetown (12-1, 4-0 Big East) rolled into the matchup on a seven-game winning streak during which they allowed only one opponent to score more than ten goals. St. John’s (2-11, 0-4 Big East), on the other hand, limped onto Cooper Field on a four-game losing streak.

The Hoyas wasted no time taking an early lead in the first quarter, as Georgetown graduate attacker Connor Morin scored only 27 seconds into the game, setting the stage for a blowout. With around 13:30 left to play, Hoyas senior midfielder Declan McDermott gathered a ground ball and scored to earn the 100th point of his career and give his team a 2-0 lead.

Georgetown continued to pile goals onto the hapless Red Storm. Sophomore attacker T.J. Haley netted his fifth goal of the season and Watson tacked on his Big East-leading 47th score seconds later to put the Hoyas ahead 4-0. St. John’s had no answer for the high-octane Georgetown attack, allowing Watson to add another goal with 10:44 to play in the first quarter.

Over the next three minutes, the St. John’s goalkeeper managed to fend off three shots from the Hoyas. With 4:57 remaining in the half, however, Georgetown broke through again as junior midfielder/attacker Cade MacLeod slotted his second goal of the season.

After coughing up three early turnovers, the Red Storm finally scored their first goal at the 3:42 mark. In response, Hoyas junior midfielder Graham Bundy Jr. finished the one-sided quarter by scoring an unassisted goal. Georgetown went into the second quarter up 7-1.

St. John’s looked strong after the break as they scored their second goal, but the Hoyas controlled the rest of the quarter. Over the course of their blistering 8-0 run, Haley, Watson and Morin scored twice while Bundy and senior attacker Mason Bonnie each scored once more. Bonnie’s goal was his first of the season. At halftime, Georgetown led 15-2.

Two minutes into the third quarter, first-year attacker Cade Caggiano netted his first goal of the season on an assist from graduate midfielder/attacker Tommy Sopko. It was a quiet quarter of play for the Hoyas, as they scored another goal with 10:18 remaining, bringing their lead to 17-2. St. John’s was given an opportunity to cut that lead when Hoyas first-year defender Joseph Vranizan was sent to the penalty box for slashing.

However, the short-handed Georgetown instead turned the tables on the Red Storm with a shorthanded goal from senior attacker Brandon Meaux with 4:57 remaining. Meaux kept things going with an assist to Caggiano a few moments later, increasing the Hoyas’ lead. St. John’s put together their only run of the game at the end of the quarter, scoring two quick goals and bringing  the score to 19-5.

It was a day of firsts for the Hoyas: Not only did Bonnie, Caggiano, Matheis, Pacheco and Humiston all score their first goals of the season, but Georgetown also scored 23 goals in a conference game for the first time in program history. Watson was dominant again with four goals, Haley provided three and an assist and Morin posted a hat trick for the Hoyas.

Georgetown will conclude conference play at Villanova University (8-4, 3-1 Big East) on April 29 at 7:00 p.m. With a win, the Hoyas will end their regular season at the top of the Big East, undefeated in conference. The game will be aired on FloLive.