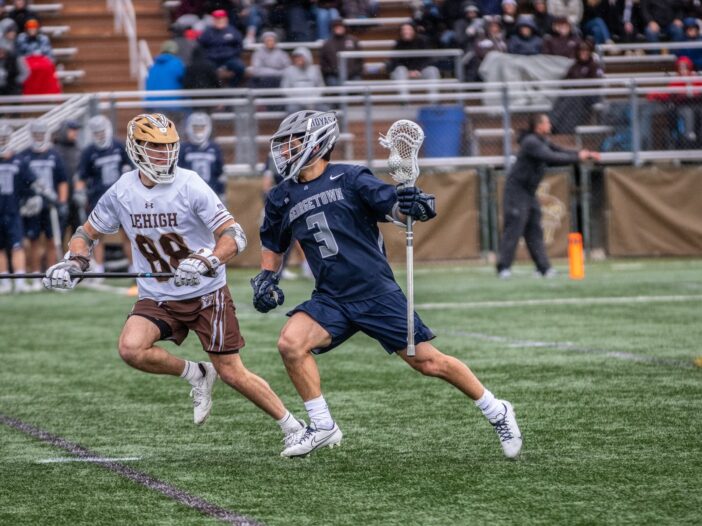 The Georgetown men’s lacrosse team built a large enough early lead to hold off a comeback from Lehigh on March 26. Senior attacker Dylan Watson led the way for the Hoyas with 5 goals, reaching the 100-point milestone for his career.

The No. 3 Hoyas (7-1) came into the matchup on a hot streak, having won two games in a row and three of four games against ranked opponents. The No. 20 Lehigh Mountain Hawks (5-3) were also playing well, fresh off of an upset win over No. 13 Army.

Neither team was able to build a lead in the opening quarter, though. Georgetown graduate attacker Alex Trippi opened the scoring with 13:38 to play in the period, putting away his 15th goal of the season after a failed clear attempt from Lehigh. The Mountain Hawks responded just a minute later, tying the game at 1-1.

Hoyas senior midfielder Declan McDermott then netted a pass from graduate attacker Connor Morin to take a 2-1 lead with 10:30 remaining. Again, Lehigh managed to pull even in less than a minute. The two teams exchanged goals and ended the first quarter tied 4-4.

Georgetown dominated in the second quarter, earning 3 unanswered goals to jump out to a 7-4 lead with 10:35 to play in the period. After consistent high-quality play to take this lead, Georgetown became momentarily sloppy, committing a faceoff violation that allowed Lehigh the chance to gain some ground.

Lehigh capitalized on the extra-man opportunity, scoring a goal to pull within 2 points, 7-5. In response, Georgetown ripped off 3 more unanswered goals to take a 10-5 lead into halftime, looking ready for a blowout victory.

In the second half, Lehigh proved its status as a ranked team, keeping the Hoyas from putting together any sort of effective attack. Both teams struggled offensively for the first several minutes of the third quarter, with both squads coughing up a combined five turnovers and taking three shots before the Mountain Hawks broke the impasse at the 9:01 mark.

Georgetown continued to struggle in all facets of the game for the remainder of the period. Just as they appeared to escape mostly unscathed, Lehigh scored 3 goals in the final two minutes of the quarter and headed into the fourth trailing by just 1 point.

In the final period of play, Georgetown found a way to grind out the victory. Watson scored a fourth goal at the 14:35 mark to put the Hoyas ahead 11-9. Trippi added another with 13:55 to play and the Hoyas led 12-9.

But, Lehigh was unrelenting and slotted 2 goals of their own to pull within 1 goal with 10:14 remaining. It would prove to be too little and too late, as Georgetown netted 2 insurance goals in the closing minutes to win the game 14-11.

It was a strong performance from the nationally ranked Hoyas to keep a resilient Lehigh squad from taking the lead.

Watson was stellar once again, putting away 5 goals to push his Big East-leading total to 27, the closest he’s gotten to matching the 6 goals he scored in the season-opener against Johns Hopkins. Trippi added 2 goals and an assist to eclipse his career 100-point mark.

Georgetown first-year goalkeeper Michael Scharfenberger turned in a strong performance in his first collegiate start. Though this game tied for the most goals the Hoyas have allowed in a single game all season, Scharfenberger was clutch when it counted: He saved 3 shots in the decisive final period of play.

This has been a promising stretch of non-conference play for Georgetown. After eight games, the Hoyas are 7-1. They have outscored their opponents 116-68. They get clean opportunities from all over the field, move the ball around well and are smart defensively. Big East play is coming and the Hoyas look well up to the task.

They will look to keep their streak alive when they take on Big East rival No. 17 Denver (5-4) in Colorado on April 2 at 2 p.m. EST. Fans can watch on Altitude TV.