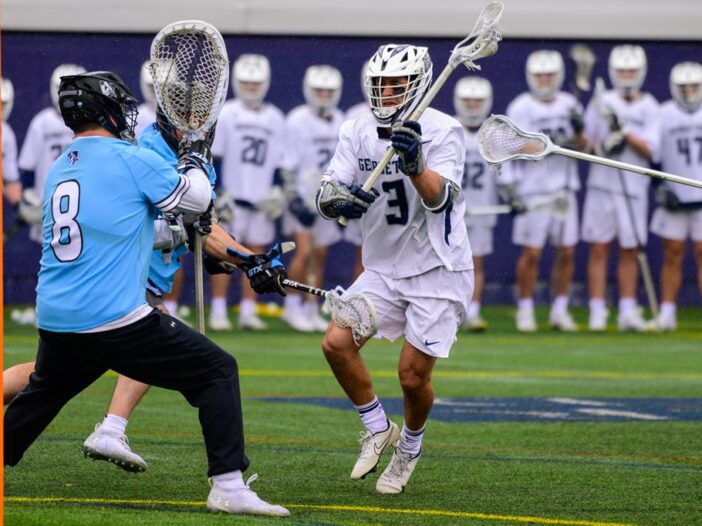 Sporting their all-white jerseys, No. 3 Georgetown men’s lacrosse (1-0) braved the cold, snow and a very slow start to beat No. 16 Johns Hopkins (2-1) for the first time in school history Feb. 13. With high attendance at Cooper Field, the match had a great atmosphere despite the conditions.

Winning the season opener 16-8, the strong showing from Georgetown snapped Johns Hopkins’ hopes to extend its early-season two-game win streak, dropping it to 2-1 on the year.

The Hoyas had a shaky start with the Jays netting five goals in the opening frame and taking a 5-2 lead. Thankfully, Georgetown senior faceoff James Reilly’s heroic solo-effort goal, a goal from graduate attacker Connor Morin, and another by senior attacker Dylan Watson with seven seconds left in the first quarter acted as damage control.

However, the Hoyas did not maintain this momentum for too long, After the first five minutes, the Jays were able to settle into their offense with sustained possession and pressure. Hoya graduate student goalkeeper Owen McElroy was forced to make four saves as he faced 14 shots throughout the quarter. By the end of the game, McElroy had made 17 saves en route to earning a spot on the United States Intercollegiate Lacrosse Association’s National Team of the Week.

At the start of the second quarter, Georgetown flipped the script and did not look back. Behind another three goals from Watson and two more by graduate attacker and midfielder Alex Trippi, Georgetown scored seven unanswered goals, ending the quarter up 7-5. Johns Hopkins narrowed the gap with two late scores in the third quarter, but the Hoyas’ defense showed no signs of faltering. Going into the final period of play, the Hoyas had an 11-7 edge on the Jays.

Despite a huge offensive spark by the Jays in the middle of the game, the Hoyas’ defense held them scoreless for the entire second quarter, ultimately posting a 24-minute shutout midgame. Johns Hopkins was unable to find the net from the 1:50 mark in the first until the 6:43 mark in the third.

The fourth quarter was much of the same, with Georgetown winning the frame 5-1 and punctuating a dominant opening-day win. The Hoyas held possession for a majority of the final quarter, dashing any thoughts of a late Jays comeback.

Offensively, Georgetown junior midfielder Graham Bundy Jr. had four assists while also succeeding in netting a goal of his own. Watson had a standout game with six goals and 10 shots on target. The Georgetown offense was firing on all cylinders; throughout the match, nine different Hoyas managed to find the back of the net and etch their names on the scoresheet.

As is customary for Georgetown lacrosse, the defense had another stellar performance. Last season, the Hoyas led the Big East, only allowing an average of 8.31 goals per game. Excluding the rocky start, Georgetown held the Jays to three goals through the vast majority of the game. The Hoyas’ dominant defensive performance as a team was highlighted by their successful defense of two different man-down situations. In all, this could signal the start of another top-flight defensive season.

This impressive early showing by the Hoyas bodes well for the team’s later season hopes. Taking down a fellow top-20 ranked team sets Georgetown off on a good foot in targeting a fourth consecutive Big East title and a deep run toward the National Championship. In the past three seasons, the Hoyas have gone a combined 32-8, meaning expectations are high once again for this squad. However, the Hoyas will have to wait a while before their first Big East competition in early April.

The Hoyas will travel for another early season test against the No. 11 Penn Quakers at 12 p.m. on Saturday, Feb. 19.