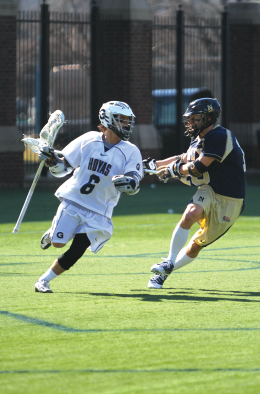 What a difference the faceoff can make.

A week after falling to Lafayette in the opening possession of overtime, Sunday afternoon’s matchup with Navy marked Georgetown’s turn to keep the ball out of enemy hands in the extra session. Redshirt junior defender Tyler Knarr scooped up the face-off, and after the Hoyas retained possession on a blocked shot, junior attack Jeff Fountain slotted home the game-winner with 2:04 remaining in overtime to give the Blue and Gray (1-1, 0-0 Big East) a 9-8 victory over the Midshipmen (2-2, 0-0 Patriot).

It was a crucial result for Georgetown, which recorded its first win of the spring, and for first-year Head Coach Kevin Warne, who registered his first victory on the Hilltop. Perhaps more significantly, the Hoyas showed resilience by flipping the script of last week’s gut-wrenching defeat, which featured a second-half collapse and a sudden-death defeat in overtime. This time, the Blue and Gray battled back after trailing the vast majority of the first half and repeatedly answered the Midshipmen’s blows in the fourth quarter.

“Athletics is an unbelievable teaching tool, and it allowed us to learn from last week and to progress this week,” Warne said to guhoyas.com. “We’re far from done, but I’m happy for the guys. They responded to the coaching staff this week, and we got a W.”

Georgetown fell behind three different times after battling back to make it 5-5 midway through the third quarter. Senior attack and preseason all-Big East first-teamer Brian Casey fired in the equalizer to knot things up at 8-8 with 2:22 remaining in regulation before Fountain’s overtime winner brought relief to the home supporters at MultiSport Facility.

“I got the ball back up top to Zac Guy, saw no one was guarding me, so I cut to the back side,” Fountain told guhoyas.com. “[Guy] hit me with the pass from up top, the goalie stepped out and I just put it low.”

Sunday’s final moments may have been sweet for the Hoyas, but things weren’t always so pretty for the Blue and Gray. After Casey opened the scoring with a strike just seven seconds after the opening face-off, the Midshipmen methodically built up a 4-1 lead in the second quarter — an advantage that they maintained until Fountain cut the lead to 4-2 with 1:38 remaining in the half.

Georgetown was finally able to bring the contest level at 5-5 on an effort from sophomore midfielder Charles McCormick with 5:26 remaining in the third quarter. The two teams traded goals — the Hoyas always providing the response — until the hosts finally ended the back-and-forth affair in extra time.

Warne was quick to praise Knarr, who emerged with the ball on 13 of 19 face-off attempts, including 9 of 11 in the second half. Knarr’s 12 ground balls also helped the Hoyas rectify one of last week’s glaring weaknesses: time of possession.

“I thought Tyler Knarr was awesome today,” Warne added to guhoyas.com. “It’s unique facing off with a long stick, but Tyler is quick enough to get the ball out and he did a great job.”

Fountain and Casey accounted for five of the Hoyas’ nine scores on the afternoon, while McCormick added a pair of second-half goals.

The narrow decision was nothing new for a matchup between these two programs, but Georgetown’s win was no surprise, either. Since beginning the Boyle Cup series of yearly matchups in 2005, the Hoyas have emerged victorious seven times in eight installments of the competition. However, a single goal has separated the two sides in five of those contests, and three of which have been decided in overtime.

The Blue and Gray will now head south for the start of spring break, travelling to Dallas next Saturday for a neutral-site meeting with Dartmouth (0-1, 0-0 Ivy League). Face-off is set for 1 p.m. at SMU Stadium.