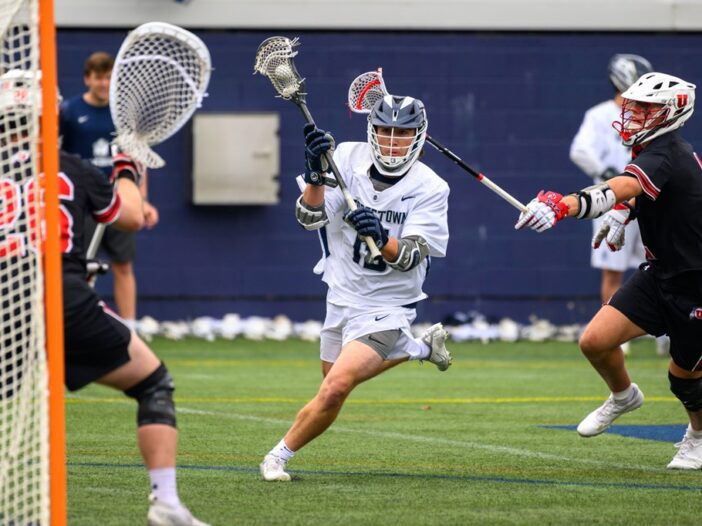 The Georgetown men’s lacrosse team wasted little time against Loyola University Maryland on April 19, taking an early 3-0 lead and finishing on top with a dominant 14-7 victory. Senior attacker Dylan Watson led the way for the Hoyas, netting an outstanding 5 goals to bring his Big East-leading season total to 46.

No. 2 Georgetown (11-1, 3-0 Big East) came into the matchup red-hot, having won six games in a row, two of which were against ranked opponents. Loyola (5-7) had faced a rough schedule but came in on a run, winning two out of its last three.

Less than a minute into the game, the Hoyas jumped out to an early lead with a goal from Watson. With 10:06 to play in the quarter, sophomore midfielder Dylan Hess scored another goal to put the Hoyas ahead 2-0. Not to be outdone, Watson added his second goal of the period with 5:59 remaining and Georgetown led 3-0.

On the other end, the Greyhounds were unable to put together any sort of attack against the smothering Hoya defense and gave the ball away three different times on shot clock violations. They finished the quarter without scoring a goal.

In the second period, Loyola came out with newfound aggression. The Greyhounds used two ground ball pickups and a faceoff win to surge back into the game with 3 straight goals, tying the Hoyas at 3 with only three minutes gone in the second quarter.

The answer, as it was all game and has been all season, was Watson, who scored another goal at the 4:55 mark to kick off a Georgetown run. 30 seconds later, senior midfielder Declan McDermott converted again and the Hoyas were back on top by a score of 5-3.

With 3:24 to play in the second quarter, Watson gathered a pass from graduate attacker Alex Trippi and niftily flicked the ball behind his back and past the Loyola keeper to put the Hoyas ahead 6-3. This highlight reel effort was soon posted on the official Inside Lacrosse Instagram page for all of its 158,000 followers to admire.

Junior midfielder Graham Bundy Jr. followed with a goal of his own to extend the Hoya advantage to 7-3, a lead that they would not relinquish for the rest of the game.

Georgetown continued to dominate with another run in the third quarter as senior midfielder Zachary Geddes scored his fourth goal of the season, Bundy Jr. added another, and sophomore attacker T.J. Haley netted a third to give the Hoyas a commanding 10-3 lead. Loyola responded with 2 goals of its own and the game went to the fourth quarter with Georgetown ahead 10-5.

Georgetown and Loyola exchanged goals to start the fourth quarter, with Watson putting away his remarkable fifth score of the game only 57 seconds into the period. McDermott powered the Hoyas to another 3-goal run beginning with 7:17 to play, extending the Hoya advantage to 14-6. Loyola managed one last successful attack and scored a final goal at the 4:03 mark to end the game on a positive note, but Georgetown came away with a 14-7 victory.

This marks another strong performance from the nationally-ranked Hoyas to conclude non-conference play, as they earned their first win over the rival Greyhounds since 2015. It is especially significant given that the Greyhounds are one of college lacrosse’s premier programs, winning the national championship in 2012 and making the 8th-most Division I Men’s Lacrosse Championship tournament appearances of all time.

It seemed like every Hoya found a way to leave their mark on the game. Watson shone in the victory with 5 goals, Bundy Jr. provided 3 goals and 2 assists, and McDermott added a hat trick of his own. Georgetown continues to impress under the guidance of Head Coach Kevin Warne, winner of the F. Morris Touchstone Award as the 2021 United States Intercollegiate Lacrosse Association Division I Coach of the Year.

Georgetown will look to keep their momentum going when they take on the St. John’s Red Storm (2-10, 0-3 Big East) on April 23 at 12 p.m. EST. fans can head to Cooper Field for the regular-season home finale or catch the game on FloLive.