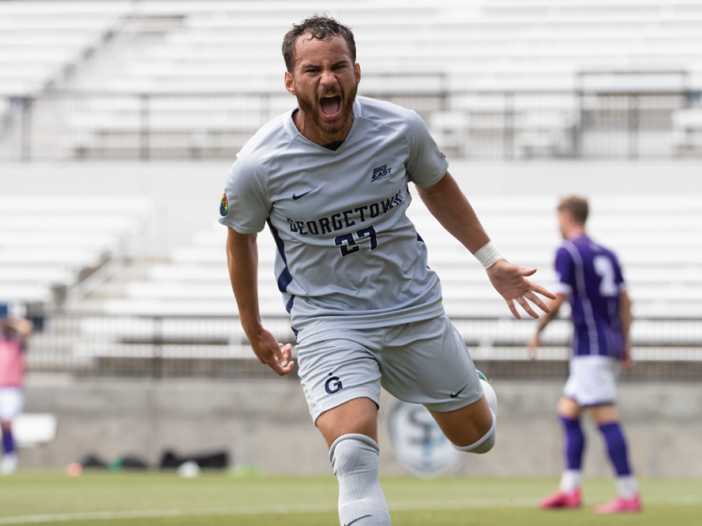 The No. 8 seed Georgetown men’s soccer team decisively defeated the High Point University Panthers 2-0 in the second round of the NCAA tournament May 2.

After a bye for Georgetown in the first round of the tournament due to its high rank, the Hoyas (9-1-2, 7-0-2 Big East) and the Panthers (12-2-0, 8-0-0 Big South) started the game off slowly with Georgetown dominating possession early on.

The first shot of the game flew over the crossbar in the 17th minute courtesy of High Point forward Caco Fernandez. The Hoyas were quick to react against this pressure, with sophomore midfielder Dante Polvara taking Georgetown’s first shot in the 20th minute of the game, which was off target.

Less than a minute after Polvara’s shot, Georgetown sophomore forward Will Sands crossed the ball to senior midfielder Paul Rothrock on the right wing. First-year midfielder Chris Hegardt came up behind Rothrock for support, received the short pass and sent a cross into the penalty area for junior midfielder Zach Riviere. Riviere jumped up and swiftly headed the ball into the back of the net, giving the Hoyas a 1-0 lead in the 21st minute.

In an attempt to equalize the score, the Panthers put pressure on the Hoyas, but Georgetown’s defense came out on top. In the 24th minute, High Point forward Alex Abril took a shot toward the top right of the goal, but Georgetown junior goalkeeper Giannis Nikopolidis punched the ball away for a corner save. In the 27th minute, Panthers forward MD Myers was one-on-one with Nikopolidis, who came off his line and closed in on Myers to make another key save.

Georgetown took three more shots before halftime, but the team failed to increase its lead. The score remained 1-0 with both teams having taken four shots each by the end of the first half.

The Hoyas kicked off the second half strong with a goal in the 49th minute. Riviere dribbled the ball down the left wing and delivered a grounded pass to Hegardt, who was surrounded by defenders in the penalty area. Hegardt managed to evade the defense and beat the High Point goalkeeper to the box. The goal marked the second time the Riviere-Hegardt duo connected to score in the game, giving Georgetown a two-goal lead.

In the 62nd minute, Polvara took a shot on goal directed toward the bottom left-hand side, but the Panthers goalkeeper was able to save it. Polvara’s attempt was followed by a shot from Rothrock that was too high for a goal.

High Point missed a couple late chances to score in the 75th and the 89th minutes. Fernandez and Abril both took shots on goal but failed to hit the target.

The Hoyas’ defense successfully kept a clean sheet, and the game ended 2-0. The team outshot the Panthers 13-9, with seven of those shots nearly missing the goal. Georgetown’s victory marked the end of the NCAA tournament for High Point.

Several Hoyas had standout performances during their victory, according to Brian Wiese, head coach of Georgetown men’s soccer.

“Both Zach and Chris have been playing well, and it was great to see that translate to the game itself. Obviously, Giannis had to make some important saves to keep it 1-0. You need a goalkeeper that can do that if you want to make a run in the tournament, so we were pleased to see it,” Wiese said in an interview with GU Hoyas.

Georgetown will advance to play against the Pennsylvania State University Nittany Lions in the third round of the NCAA tournament May 6 at WakeMed Park in Cary, North Carolina.