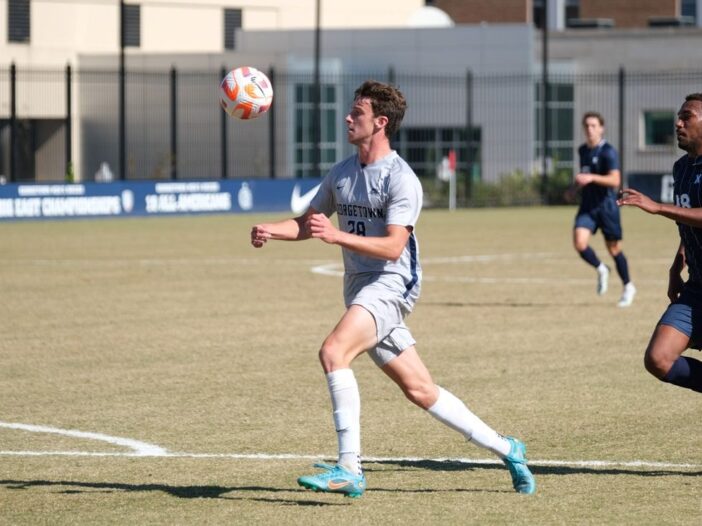 The showdown carried significant implications for the Big East championship race as the Xavier Musketeers (9-1-5, 3-1-4 Big East) were right on Georgetown’s (8-4-3, 6-1-1 Big East) heels in the Big East standings. The Musketeers came into the matchup undefeated while the Hoyas had bounced back from a challenging start to their season to roll in on a 7-game unbeaten streak. With this shutout win, Georgetown officially completed the turnaround, clinching a share of the Big East regular season title.

The Musketeers played up to their ranking early, finding an immediate chance off of the opening kickoff when their striker’s effort sailed just left of the Georgetown goal. They continued to challenge for the first five minutes of the game, as the Hoyas conceded turnovers to their high press.

As the game progressed, Georgetown tightened up its passing in the midfield and began earning chances. In the 15th minute, sophomore defender Kieran Sargeant gave the ball off to first-year midfielder Jack Panayotou outside of the box, who slid a pass back to Sargeant.

As Sargeant sprinted toward the ball, a Xavier defender decided the only way to stop him was to pull him down, handing the Hoyas a penalty kick opportunity.

Rocha stepped up to the spot and blasted a low strike to his left. The Xavier goalkeeper made a diving save but couldn’t hold onto the ball. Rocha pounced on the rebound, sending a shot past the goalkeeper’s outstretched hand and into the bottom left corner to give Georgetown a 1-0 lead.

The Hoyas earned another great chance in the 17th minute when first-year forward Jacob Murrell’s first-time effort missed just outside the near post. In the 21st minute, Xavier responded by earning a corner and sending a few dangerous crosses into the area. Thankfully for Georgetown, junior goalkeeper Ryan Schewe punched the ball out of harm’s way.

Not to be outdone, the Hoyas earned three corners of their own in the span of just over a minute. On the third, in the 31st minute, senior defender Daniel Wu headed the ball over the bar.

No one could find the back of the net for the rest of the half, so Georgetown went into halftime ahead 1-0.

The Hoyas controlled the pace for the first 15 minutes of the second half, working the ball down the near side of the pitch and firing some shots on goal. In the 60th minute, junior forward Marlon Tabora poked the ball into the box and had his feet swept out from under him by a Xavier defender. The referee signaled advantage as Panayotou gathered and launched a left-footed effort into the far corner to give Georgetown a 2-0 lead.

Xavier had a chance in the 63rd minute when the Hoyas struggled to clear a cross into the area. However, Schewe made a pair of saves to keep the Musketeers off the board.

Georgetown then added an exclamation mark in the 76th minute when first-year midfielder Max Viera stole the ball in the Xavier box and calmly drilled it into the net. Although the Musketeers managed a few efforts on goal in the final minutes, Schewe held strong and helped the Hoyas clinch a 3-0 victory and the No. 1 seed in the Big East tournament.

Wiese said he is happy to see how his team has bounced back from a challenging start to the season.

“We had the benefit of our calendar date being uncircled as we lose our first game to St. Johns and we’re 1-4-2,” Wiese said. “Suddenly, people forgot about what we were capable of and then guys lived up to their potential.”

Rocha said he is proud of the Hoyas’ perseverance so far this season.

“This team is very resilient,” Rocha said. “We had a lot of guys leave and I don’t think that affected our mindset.”

Georgetown will look to keep its eight-game unbeaten streak alive when they take on the Marquette Golden Eagles (4-8-4, 0-4-4 Big East) at 1 p.m. on Oct. 29 at Shaw Field.